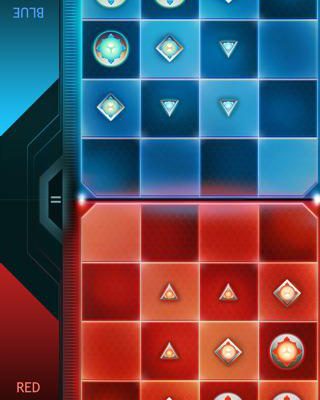 It’s a sad fact that a name can make or break a game. If you call your game Happy Funtime Princess Adventure, it had better not play like Gears of War. It doesn’t have to be that drastic of a divide, though. Take for example Lunar Chess, which is a fun board game that has only a passing resemblance to Chess. People looking for a chess game won’t get one, and people who don’t like chess could pass it by.

Now I promise not to hang this entire review on the improper naming of the game in question, because at its core Lunar Chess is a very fun game so long as you’re not expecting it to be chess. The board is a grid, 4 squares wide by 8 squares long, with the playfield divided in the middle. One side of grid is blue, and one is red. Each player will control all the pieces that reside on their side of the colored board. So if you move a piece of yours into the other colored area, it becomes your opponent’s. 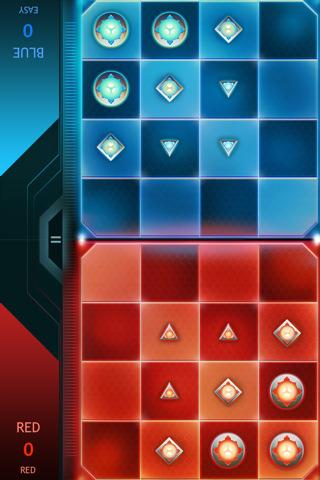 To start the game you have a total of 9 pieces, 3 that behave like pawns, 3 like queens (there’s the chess tie-in), and 3 that can move 2 spaces horizontal or vertical. From there you’ll move your pieces around your side of the board, looking for a shot to slide across the center to take out one of your opponents pieces. Since you then lose control of it the most important thing to make sure is that your opponent can’t throw that piece right back at you to take out one of your pieces. What this really means is while you can take out weak pieces with your strong pieces, you probably don’t want to since you’ll lose control of the strong piece in the process.

It’s an interesting dance that took me quite some time to wrap my head around. The idea of controlling area and not pieces is certainly new to me, and early on I found myself trying to defend against pieces, ready to counter attack only to remember that the piece was now mine cause he slid it across the board. Sounds confusing right? Well, it is! A playable guide or tutorial would’ve been awesome here, but instead you just get a page of text explaining it all. While that’s fine, with a somewhat unique set of rules like this a little play-guided explanation would’ve been far superior. It’s one of the reasons we loved Carcassonne after all.

The game is for 2 players only (though goes up to 4 on the iPad version) and you can play it either locally or over the net. Setting up an online game was simple, just type in a nickname and hit start and it’ll match you up. If you want to play a private game over the net, just type a password into the field and have your friend type in the same one and Lunar Chess will match you two up. It’s a pretty elegant and simple system.

Lunar Chess is worth of a look from fans of strategy games like chess since the concepts are there (knock out the other guys pieces) but wrapped around this interesting idea of area control. I doubt it will blow anyone away, but it’s a nice change of pace from other abstract games.