Marooned 2: Secrets of the Akoni Review 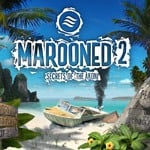 An ancient temple, a near-magical mineral and a war-mongering general…what could possibly go wrong?

As hidden object game Marooned wrapped up, you had successfully managed to repair a motorboat and jet away from the island upon which you’d found yourself trapped. Hooray! When Marooned 2: Secrets of the Akoni picks up, the boat kacks out and you find yourself being pulled to an island right next door to the one you just escaped. Sigh. Ah, well…time to start searching around for a way to escape again.

Though the story of Marooned 2 continues that of its predecessor, you can catch up pretty quickly if you don’t feel like backtracking. The islands you’re investigating were once

home to the Akoni, a people who had harnessed the powers of a mineral called Resource that has near-magical powers. In the first game, you managed to find the Resource and

tap its monumental energy; in Marooned 2, you’ll have to put that knowledge to work to stay one step ahead of a war-mongering general bent on bending the Resource to his

own nefarious ends. Using the Resource in a special ceremony at the island temple will weaponize it, so you just have to make sure you get there first.

You’ll explore many different locations on the island to gather useful items and learn more about the Akoni and the Resource’s unique abilities. In most cases, you’ll be

performing a simple item search, hunting for objects on a list. Items in yellow can’t be found until you perform some action on the scene, like perhaps cutting down a tree or

washing the poisonous coral off a rock. In addition to the objects on your list, you’ll have to keep your eyes peeled for things that match the silhouettes in your task bar, which

are tools like the ax for that tree or a sponge for that rock. Your task bar is also host to a small cage; each item you tick off your list raises the bars a little bit more, until some

other useful trinket is finally released.

The stuff you acquire can sometimes seem a bit random, but the game gives you pretty obvious hints about how you’re supposed to use them. Your cursor turns into a puzzle

piece when you hover over something in the scene that you can interact with, and clicking it will usually spell out in no uncertain terms what you need to do. The tool you

need to finish a scene will frequently be found in another location, but hopping from place to place is as easy as hitting the map and pointing at where you want to go. The

game will flat out tell you if you can’t do anything else with what you currently have in your inventory, so getting stuck is pretty difficult.

Marooned 2 carries over its predecessor’s most inventive game mode, in which you must figure out which two objects can be combined to fit a certain theme. A suitcase and a

postcard would complete “Vacation,” for example, while a trowel and a sun hat would help you clear “Gardening” off your list. It’s a fun twist on object searches that gets you thinking about what you’re looking at in a totally different way. If the film didn’t go with the popcorn to finish off “Movies,” then what does? Don’t worry too much about getting

stumped – not only do you start off Marooned 2 with plenty of hint spears, but a bunch more are scattered throughout the locations, giving you more than enough object hunting

Given its tropical island setting, it’s no great surprise that Marooned 2: Secrets of the Akoni is quite lovely, with lush jungle, colorful animals, and crystal blue waters. The

environments in the game are taken right out of an Indiana Jones movie, right down to the ancient temples with huge stone idols. The story isn’t nearly as compelling as the first

game, but being the middle part of a trilogy is always tricky. You’ll still want to know how it all turns out, anyway.