By Kellie Cardwell-Winters | 13 years ago 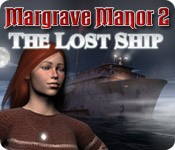 We last left Edwina Margrave as she searched through the family’s haunted Mansion in search of the dark secrets of her family’s history. Now in Margrave Manor 2: The Lost Ship, her quest continues as her grandfather’s ship, the Aurora Dusk, re-surfaces after 10 years. Margrave Manor 2 offers more of the beautiful artwork and re-playability as the first game, however it has failed to iron out the issues of its predecessor, and has a few new issues of its own.

Edwina flies in to meet Mr. Thomas Raynes and they take an immediate liking to one another. He agrees to accompany her and they search the ship to unravel the trail of clues Edwina’s grandfather and his partner left behind to find the treasure known as Neptune’s Gold. The ship, spooky and dirty, holds many answers, but also creates many new questions about her grandfather’s whereabouts. They must find the treasure quickly as the ship has been sabotaged. It becomes clear that not everyone on the quest for Atlantis had pure motives – there may even have been a murderer among them.

The objective is to search through the rooms and find all of the items listed along the bottom of the screen. Only four items at a time will show, and only those items can be removed. As you find items, more will appear. There are 20 chapters, each with six search screens and multiple mini -ames consisting of find the differences, picture assembly, gem stone pictures, arcade and pipe assembly puzzles.

The game can be played in two modes: Story and Freeplay. Levels that have been unlocked in Story mode can be played in Freeplay. Freeplay mode"is strictly search screens with no mini-games or reference to story, and gives you a ranking once finished. A difference from the first game is that there are no timers in either game mode.

The game maintains its unique feature of giving a hint to the player every three minutes regardless of how many items found. The hints can be utilized by clicking on the hint button and they do not carry over to the next level if unused.

After you complete a screen in Story mode you will be asked many times to re-assemble a letter, and the information in it tells the story and keeps it moving. You will also assemble gemstones on jewelry boxes, which contain blueprint or stone pieces, and you will play a Breakout-style computer game where you hit a ball with a paddle at the bottom of the screen to destroy items above. Completion awards you with another stone piece and the game proceeds.

One of the most difficult puzzles is the pipe assembly: instead of turning the pipes, you switch them out. To solve the puzzle you do not have to use all the pieces, you just need to connect them so they will not leak.

As you finish searching each room you will be rewarded with one item that will be placed in your inventory. You can see all of the items in your inventory by clicking on "View Collection" in the main screen.

Margrave Manor 2 is an semi-enjoyable game and has many things going for it, such as an interesting storyline, and photographs mixed with beautiful hand-drawn images that are crisp, clear, and well hidden. The game is very long and each time you play a new game the items are hidden in different locations, but the items you will search for are the same items screen after screen, which becomes quickly frustrating. The mini-games have enough of a challenge to keep you interested but they tend to repeat. It felt like there were almost as many torn letters to re-assemble in the mini-games as there were hidden object screens to search!

While overall Margrave Manor 2 delivers on storyline, appearance and mood, it has flaws that will most likely bother players so it is definitely a wise move to play the demo before you purchase this game. Seeing the same items on every screen quickly becomes boring, and you find yourself frustrated as you recognize them from the last ten screens you have searched. There is a lot of value in the re-playability of the game but since you are replaying screens with the same items all the time, it may not be that big of a value after all.

For similar games, try The Secret of Margrave Manor, Adventures of Robinson Crusoe, and Steve the Sheriff.