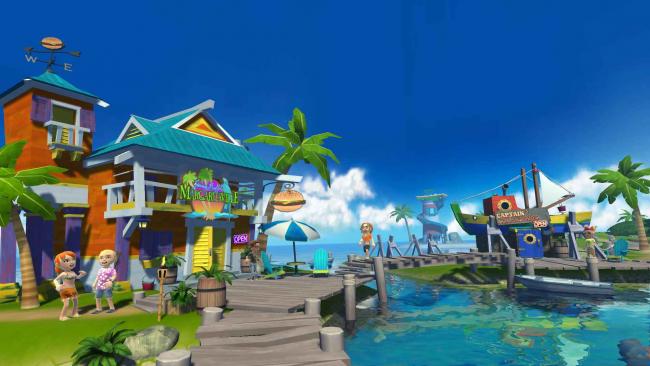 It sounds like a joke. And maybe that’s how it started, but it turns out that Margaritaville Online — a game based on Jimmy Buffett’s song and chain of restaurants of the same name — is also one of the most fully realized and enjoyable games released on Facebook to date. Far from a cheap cash in, Margaritaville Online gives you a large world to explore, plentiful and varied mini-games to play, and arguably the most impressive visuals on the platform. It’s almost unbelievable just how much you’ll enjoy wasting away in this virtual paradise.

Margaritaville Online takes place on a beautiful tropical island, and your ultimate goal is to build up a rocking beach-side bar. But a surprisingly small amount of your time is done doing just that. This isn’t a standard business management game where you’re stuck indoors, constantly futzing about with every little detail of your business. Instead, in order to build up your bar, you’ll need to complete a seemingly never-ending stream of missions and goals, which require you to venture out and explore the island.

One of the most impressive aspects of Margaritaville Online is just how big it is. There are a number of different places to unlock and explore, from the titular town of Margaritaville to hidden beaches, caves, and nooks filled with treasure. The game world is big enough that there’s a fast travel option to speed things up, though this consumes energy. Like most games on the platform, Margaritaville Online limits your play time with an energy system, which depletes after you complete just about any action. For the most part you can still get in a good, lengthy session without spending money on extra energy, but there are some tasks that will drain your meter quite a bit.

Some of those tasks are fairly banal social game staples. You’ll have to smash crates to find collectible items, or chop down bamboo that frustratingly re-grows every few days. But littered liberally throughout these more mundane tasks are a large number of enjoyable mini-games. You’ll be doing everything from heading out on the water to go fishing to shooting pirates with a slingshot to playing the steel drum. Most of these games are quite simple, but they’re also almost all quite fun. And for the most part, if you don’t like a game, you won’t be forced to play it outside of a handful of times.

While all of this varied and fun gameplay is great and will keep you coming back to the game, what will initially draw you in is how it looks. Margaritaville Online features colorful, charming, fully-3D graphics that run ever so smoothly in your browser. When you put the game in full-screen mode it’s easy to forget it’s a Facebook title. The terrific visuals and breezy tunes go a long way towards making you feel like you’re in an actual island paradise.

There are probably plenty of people who will skip over this game simply because of its name. After all, it’s hard to imagine a title that sounds like more of a generic cash-in than Margaritaville Online. But those people will be missing out. With so much to do and see, Margaritaville Online is easily one of the biggest and most enjoyable games on Facebook.