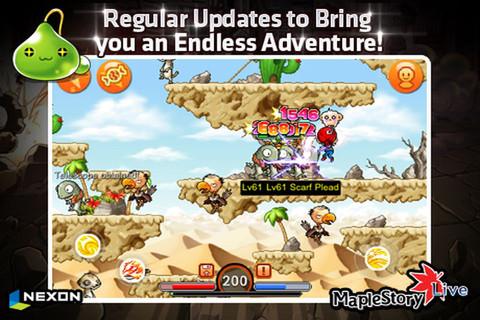 In the words of the great American philosopher LL Cool J, MapleStory has been something like a phenomenon, especially in Asia. Developer and publisher Nexon is hoping to add another chapter to its nearly decade-long success story with MapleStory Live for iOS devices. This freemium side-scroller isn’t an MMO, but it incorporates enough of the series’ familiar gameplay and feel that fans will no doubt want to give it a go.

Just like previous games set in the Maple World, MapleStory Live is a 2D platformer with heavy RPG elements. Or it could be an RPG that just happens to play out like platform action games from the past, depending on how you look at it. Tomato, tomahto. Regardless, with full fledged MMO functionality difficult to pull off on mobile devices, Live is a single player affair with social elements added to the mix.

As Fenris, you take on the role of a rookie Dual Blade, a ninja-like thief and assassin (another class, the robot-using Mechanic, can be purchased later). Fenris is a member of the Black Wings, an organization he believes is devoted to maintaining peace and order in the Maple World by opposing the Cygnus Knights. He quickly learns that not all is what it seems, as characters he meets cause him to question his purpose and allegiances.

Quests are given out by hubs of NPCs that hang out in towns. Fenris can take on one main quest that drives the narrative forward and up to three side quests at the same time. Experienced RPG players will quickly figure out how to maximize their time by taking on multiple quests that take you to the same area. There isn’t a whole lot of quest variety – most are of the “kill x monsters and bring back x items” persuasion – but the interesting story and often humorous character interactions mitigate this issue somewhat. Many of the missions also require you to backtrack through zones repeatedly, which gets old fast.

The controls are easy to grasp, with a virtual d-pad on the left side of the screen and buttons on the right. There are dedicated buttons to Jump and Attack/Talk, with three more that can be mapped to consumables or special abilities as desired. Combat involves a lot of hacking and slashing in the vein of old school action games, and defeated enemies drop money (Mesos) and items. Unfortunately, the controls also manage the neat trick of being overly sensitive yet lacking in precision, so be prepared for moments of frustration in zones that require lots of carefully timed jumps or simply have big clusters of monsters.

Leveling up allows Fenris to learn new abilities (some active, others passive) and boost his stats. New attribute points can be assigned manually or automatically funneled toward offensive, defensive or balanced play styles. MapleStory games are known for requiring careful consideration of those kinds of decisions, but this installment seems more forgiving, at least early on.

Nexon has monetized the game through the Candy Shop, where real money can be swapped in-game for (wait for it…) Candies. As freemium games go, MapleStory Live feels a little heavy-handed with its cash shop, requiring some money to be spent simply to unlock unrestricted use of things like the Mailbox, Storage and various mini-games. On the plus side, Candies can be used to purchase a truly impressive range of goodies, from items, to XP boosts to entire content expansions. Paying for the premium version of the game grants you access to many of the things that Candies can buy a la carte, as well as ridding you of the bothersome ads that run at the top of the screen. 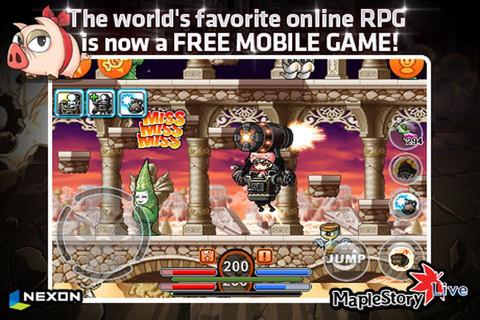 On the graphical front, there’s no question that this is a game that hails from the East. There are manga influences in the character and monster design, but even more in the exaggerated expressions and emotion bubbles that pop up during conversations. It all looks very nice, especially on the larger iPad screen. Special props go out to whoever designed the map, which is very helpful in terms of locating your objectives within each stage and the world at large.

Social interaction starts with the Mailbox, which can be used to reach out to specific players. For mass communication, there’s the Ad Board. It’s sort of like a 21st Century classifieds page – except with much worse grammar and spelling – and it’s not a completely fulfilling substitute for the kinds of community features found in the PC MapleStory games.

That statement can probably be generalized for the game as a whole. With the Maple World accessible in so many ways, MapleStory Live might work as a good introduction to spur people to check out the more robust features in its sister titles. Otherwise, it feels destined to be a temporary fix for players who don’t want to leave that setting behind when all they have handy are their phones or tablets.