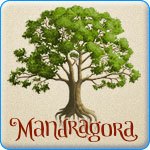 Gregor Mendel, the father of genetics, would be proud of Mandragora. The game lets you cross seeds to create new plants that share similar traits as its parents. You need to work fast in taking care of the trees by watering them, swatting bugs repeatedly, chopping down trees to make room for new ones, and protecting trees from flooding while trying to create new breeds.

It’s not about making money, but saving land and its inhabitants by mixing and matching seeds until you find the next step in the magic tree’s evolution. Each of the seven lands has its own magic tree.

Many gamers will wonder how this one compares to Plant Tycoon. Plant Tycoon involves grabbing the watering can, swapping with the pincers to crossbreed trees, and going back for the watering can or swatter to feed thirsty trees or save trees from nasty pests. Mandragora involves working faster, and requires less brain work especially because of the time limit.

Enter the scene of your first garden. You’ll notice four shadows, places where you can plant seeds. The game controls how many seeds you can plant and where. Limiting number of trees prevents the game from becoming too easy. But the location feature is awful as trees block each other all the time. Oh, sure wind blows to let you know if bugs remain on your tree, but it’s frustrating instead of challenging.

The game calls for thinking fast and logically. It helps along by giving you an idea of how good a match a plant would be with another. Take the pincers to pluck pollen from one plant and drag it over to others. A number pops up as you put the pincers over each tree. The higher the number, the higher the magic will be in the new tree and the closer you get to the five-star tree.

The first seeds on the scene have no stars. Pair them up and you should get a half star or a whole star in your new tree. Keeping crossbreeding and gaining more stars as fast as you can to finish off the level by making a five-star tree. The time available varies by level, but the game measures them in days and hours. Each green jewel in the time meter represents one day.

When you finally create that five-star plant at the end of the level, you’ll know it because of the music and visuals. The graphics are neither subpar nor gorgeous. They’re nice and the music suits the environment and actions. The scenes have slight variations as you go from grassy land to mountains to valleys. The weather conditions change based on the locations.

The game turns frantic after finishing two lands. The bugs are out in full force, taking away any joy left in the game. This would be a good time to use the more relaxing Free Gardening, Tree Designer and Encyclopedia features. Before you can dive in to these, you must unlock them through story mode.

After conquering three lands, you’ll get breeding amulets: power-ups that can give you another day to complete the task, prevent trees from going thirsty or receiving a visit from bugs for the level, and “speed up the flow of time at once,” but why would you want to speed time when you need it to breed the five-star tree? The power ups have a catch. They only appear over one tree and you must crossbreed with that tree even if another tree has a higher number.

Free Gardening allows you to return to past levels to check out your creation. You can change up the garden by chopping trees and crossbreeding seeds. Take a picture of the final product for keeps. Free Gardening has a bug (pun intended). Some of the levels had no trees. No seeds await either, so you can’t do a garden for that level and a few others.

Tree Designer should attract folks who love to design or dress up. You have control over every aspect of the tree divided into three parts: trunk, leaves and flowers. Each part allows you to adjust the thickness, length, color and many other traits.

You don’t get to know your plants and their names as well in Mandragora like in Plant Tycoon. Deeply entrenched in Plant Tycoon, it was hard to avoid having words like Reptans, Authurium, Orchid, and Jalapa Ball Cactus floating in your head. But this one, time takes away any opportunity to read and learn the names of the plants especially since the font choice isn’t as readable as it could be.

Watching the trees bud and bloom provides many “Aw” and “Beautiful moments,” a big highlight of the game. The other highlight is chopping down bug-laden trees leaving you with the feeling of, “HA! Take that!”

The free trial time gives you more than enough time to get an idea of whether Mandragora feels muddy or as enjoyable as watching a fast-growing garden. However, you may not get far enough in the game to unlock the other modes should those catch your eye.