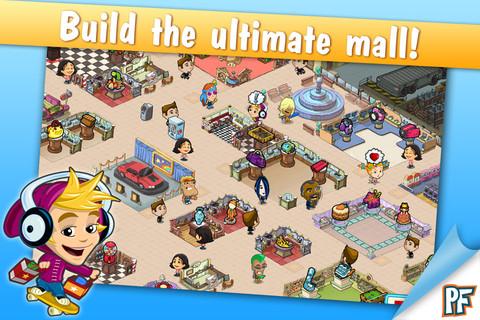 Play Mall Stars and become one with the shopper

If you’ve ever worked in the magical realm of retail, then you’ve met a demanding customer or two. Maybe you even passed the long hours between your trips to the punch clock by fantasizing about telling those customers where to go. Mall Stars for iOS is a mall-building simulator that requires you to personally assist almost every shopper who walks through your mall doors, but it’s not so bad. In fact, you’ll probably have fun helping said customers–especially when they scatter sweet, sweet coins for you to pick up.

In Mall Stars, you are a mall manager who must turn a handful of impotent stores into a must-visit shopping hub. You do this by opening up new stores, stocking them with items, collecting cash when it comes in, picking up your stock, and expanding your mall when you have the money to do so.

The majority of your attention is sucked up by the shoppers who walk through your mall’s doors. Each one has specific tastes that need to be catered to. When a shopper asks for a specific article of clothing, for instance, you need to tap the item to direct the shopper there (you can install information kiosks, but apparently some people just prefer the human touch, so to speak). It’s definitely worth your while to keep your customers happy, as a little assistance often encourages them to flip out and go on a spending spree. Coins and experience ahoy! As you level up, you unlock more items and stores that you can use to build up your shopping center.

When you first play Mall Stars, you might think that it has nothing to offer you beyond simply building and managing a mall—a gameplay concept that’s explored by no fewer than fifty billion simulation games on the App Store. But as you work deeper into the game, you discover that Mall Stars is actually a compelling mix of building simulation and time management.

Mall Stars‘ time management elements aren’t surprising, as it’s a game by PlayFirst—the studio behind the Diner Dash series. Unlike Diner Dash, however, the gameplay in Mall Stars is busy, but never really reaches “frantic.” You need to keep an eye on your stock, your fleet of trucks, your money, and your shoppers. You also need to make time to build extensions and oversee store openings, but once you get into the groove of things, playing Mall Stars is enjoyable and really appeals to that little gland in the back of our brains that makes us happy to tap screens.

Granted, Mall Stars doesn’t grant you a remarkably original gameplay experience. It’s safe, and more than anything: it’s easy to pick up and play, the graphics are colorful, and the big-headed character designs don’t stray too far from the social/mobile gaming standard. That said, Mall Stars is pretty difficult to stop playing, even if you’ve spent a considerable chunk of your life as a retail slave. That’s saying something.