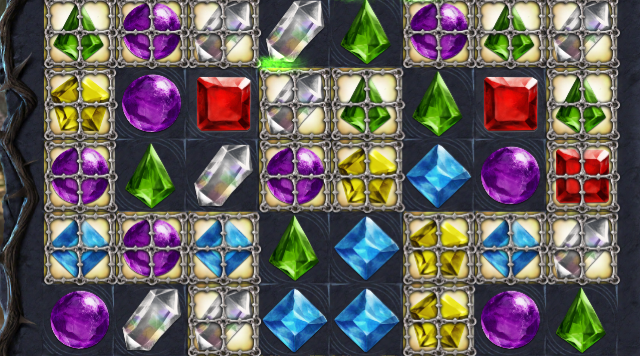 This Dragon Drags On

Maleficent is the chief bad girl of Disney’s Sleeping Beauty. She’s best known for her subtle horn-shaped headdress, throwing a hissy fit over not being invited to baby Aurora’s christening, and transforming into a dragon when she gets really mad (let’s be honest with ourselves: We only hate her because we’re jealous).

Maleficent’s titular movie aims to portray the classic villain as misunderstood, not evil. It seems terrible circumstances turned Maleficent’s heart to stone, making her resentful and bitter. The film’s premise is interesting and thought provoking. Unfortunately, Maleficent Free Fall is neither.

If you’ve played any of the countless Bejeweled clones littering the App Store and Google Play, you already know how to play Maleficent Free Fall. Swap out gems on the game board to make matches of three. Better yet, matches of four or five have an explosive effect that helps clear away obstacles and grants a higher point total.

In some levels, matching up tiles causes the grid to light up. In other levels, matched gems break open chains surrounding random pieces. In many cases, you’re required to work around chains and light up the board. In all cases, Maleficent Free Fall is as dull as a certain princess that managed to prick her finger on a spinning wheel, somehow.

The problem likely lies with the game’s free-to-play formula. As is the case with most King titles, Maleficent Free Fall challenges you to complete levels within a certain amount of moves. Unlike most King titles, Disney stifles momentum in hopes the player will run out of moves and buy more.

The game boards are cramped and crowded with chains and nooks that are difficult to work around. It’s not uncommon to have only one valid move as an option, and, more often than not, that move does nothing to advance your goal. It’s rare for a match-three title to have to shuffle the game pieces in order to make more valid moves, but in Maleficent Free Fall, you’ll see the “Shuffling” message pop up again and again.

The graphics are also dull. The gem pieces aren’t anything special (whereas the likes of Candy Crush Saga can give you massive sugar cravings), and you’re introduced to characters that don’t do much besides stand at the top of the screen and wave their hands from time to time.

Maleficent Free Fall does present one interesting idea: Power-up fuel is drawn from a well of magic that replenishes after levels. Alas, spells require a great deal of magic to perform, and your resources refill slowly.

Disney should be careful about letting titles like Maleficent Free Fall represent a major movie property. Potential paying customers may wind up associating the mediocre game with the film.