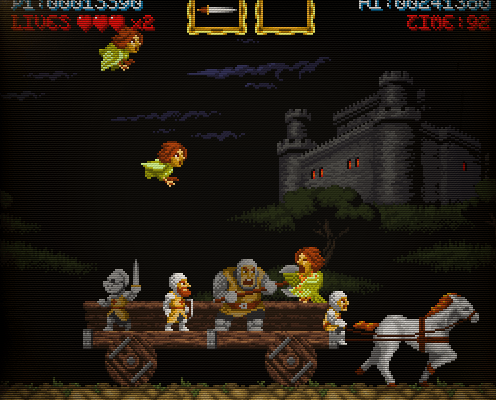 Throw classics like Shinobi and Ghosts’n Goblins into the cauldron, and out pops Maldita Castilla

Maldita Castilla, the latest release from the wonderful Locomalito, plays like Shinobi and looks like Ghosts’n Goblins. However you look at it, this retro-styled indie game echoes its old school inspirations superbly, and provides what many indie platforms as of late have been missing – variety.

Each level provides a new challenge, rather than just being the same gameplay with slightly different environments. It can sometimes feel a little too trial and error, but since the price tag is missing, we can easily see past its minor shortcomings.

A young witch called Moura is tricked by a demon, and her tears open up a gateway that allows evil to roam free through the lands of Tolomera. A band of knights are sent out to banish the demons and close the gateway using Moura’s tears. 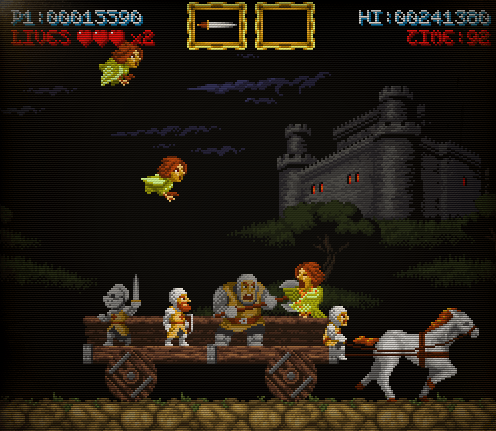 Maldita Castilla plays like a retro platformer from the 80s, although it definitely has an underlying modern feel to it when it comes to the controls and the sheer variety in gameplay. For the most part you’re careering left and right, chucking your knives into enemies and dodging attacks, but Maldita Castilla is really at its peak when it’s challenging you with crazy situations.

Be it holding off flying harpies from the back of a wagon, to scaling a Donkey Kong-style mountain with dangerous eggs constantly rolling into your path, this is a title that revels in throwing something different your way at regular intervals. The boss battles in particular are always an absolute blast, while powerups help to give you that extra bit of firepower.

It’s also the wonderful attention to detail that makes Maldita Castilla a joy to play. The game’s environments are gorgeous as hell, and little additions here and there – such as the “bump” of the wagon as it goes over rocky ground – work wonders in giving the game a huge personality boost. 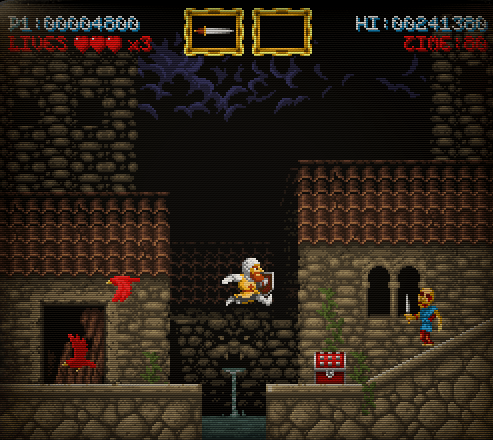 It’s notable that the retro inspiration doesn’t just stop at the visuals. Maldita Castilla is tough – perhaps not as tough as the aforementioned Shinobi or Ghosts’n Goblins, but tricky all the same. You’ll die a lot, and there’s no way to save the game, so you’ll need to complete the hour-long title in one run.

But with the retro aesthetic comes other issues from that era. The controls are good for the most part, but are lacking in certain areas, such as when you’re climbing up a rope or chain. This leads to hugely annoying sections that really aren’t much fun at all.

The game also relies a bit too much on trial and error at times. Enemies will come lunging towards you, and you’ll have no time to consider how best to take them out, meaning that a lot of deaths feel rather cheap, especially on your first playthrough. 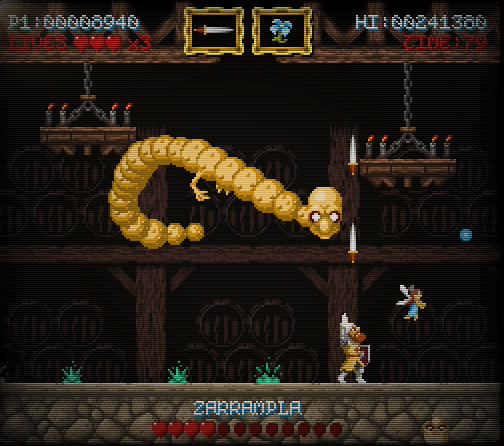 Having said that, you’ll want to play through the game multiple times anyway, thanks to its many secrets. There are special requirements to fulfill, special levels to find, and those all-important tears to collect. Maldita Castilla is a hugely entertaining game, and if you’ve never given a Locomalito title a playthrough before, this is a great place to start.