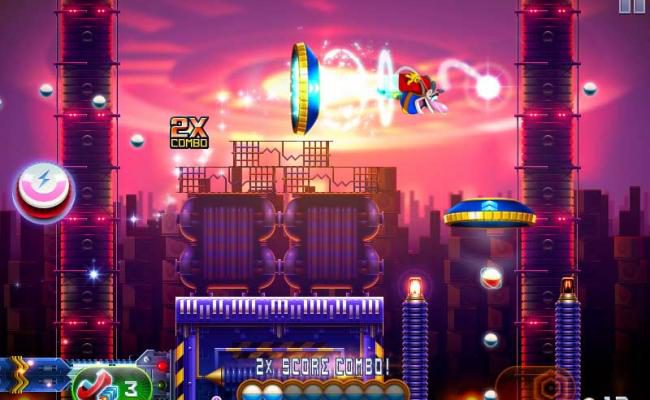 Who needs a blue hedgehog when you’ve got magnets?

The new rotund and big-nosed hero in town probably can’t fix your plumbing.  Marrying gameplay elements from platformers both recent and classic, Major Magnet introduces a unique brand of traversal much more kinetic and demanding than touch controls can typically manage. Developer PagodaWest Games has built a vibrant and extensive game that remains engaging and varied. Already honored by App Store Editors and PAX East, is the Major a 2D mascot for the mobile generation?

Thanks to the evil Colonel Lastin, Major Magnet, or “Marv” to his friends, has his work cut out for him. Lastin plans to reverse the poles of the Earth, and apparently the Major and his friend, a purple hamster named Gus, are the only ones who can keep things from going South (or would it be North?). Brief comical cutscenes centered on Lastin in a Dr. Claw role play after completing each world, but they don’t add to the minimal story. The requisite narrative is adequate, but I would have liked to see it taken further. Major Magnet could be an iconic character if given the chance.

The substantial adventure is divided into six worlds of ten levels each, with a seventh placeholder world promising more content in the future. Each stage holds a semi-optional bonus collectible called a “bake.” I say “semi” because while each level can be completed without acquiring the bake, an increasing number of them are required to unlock each subsequent world. The player must eventually replay previous levels to advance the game, but dedicated bake gatherers will unlock later worlds ahead of schedule. Once a world has been completed, even more optional collectibles appear in previous stages in the form of puzzle pieces.

The basic building blocks of the levels in Major Magnet are magnets, which function like the pull stars from the Mario Galaxy series, and launchers, which function like the barrel cannons in Donkey Kong Country. Tap a magnet and the Major will fly toward it and enter an orbit. Tap the same magnet again and the momentum of the orbit will launch the major in the expected direction. Mastering this timing will allow the player to transition smoothly and quickly between magnets in a möbius-shaped motion. The player can also swipe to execute a mid-air dash, allowing the Major to cover greater distances and opening up the opportunity to pull off satisfying last-minute saves.

The mechanics are intuitive, the controls are responsive, and the journey flows very well. The bite-sized stages are ideal for on-the-go play, but clearing a full world or two in a sitting is more than doable and very enjoyable. The most surprising aspect of Major Magnet is the difficulty level. Later levels will require a combination of fast reflexes, excellent timing, and in some cases foreknowledge of upcoming obstacles. The not-casual will find the more taxing gameplay refreshing for an iOS title, but at the same time Major Magnet loses a lot of charm when you’re stuck. There’s no penalty for death, but the developers were not afraid to place a level’s more difficult maneuvers inches from its goal, forcing the player to complete the balance of a stage in order to make another attempt. 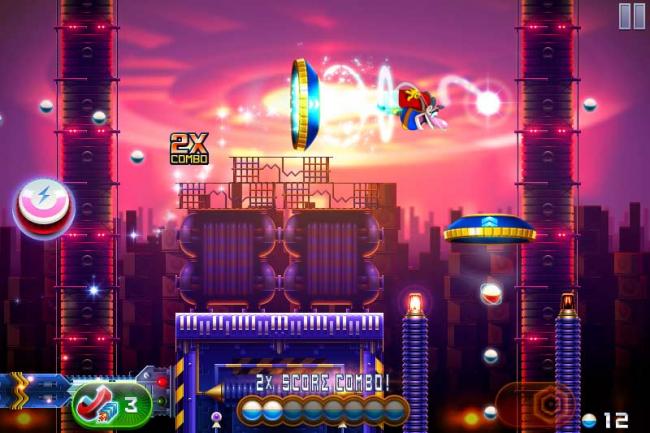 The areas that Major Magnet skimps on or lacks, while significant, are extracurricular. A compelling narrative and music that won’t be muted in short order would be welcome bullet points for the inevitable sequel. Levels also tend to blend together, and the archetypal world themes like fire or ice could do with some shaking up. There is an in-game store where power-ups or cosmetic upgrades can be purchased with real or in-game currency, but the digital shelves contain nothing of consequence.

Major Magnet‘s memetic ancestry will be apparent to any child of the 16-bit era. Using magnets to accelerate your character down into parabolic valleys in the game’s ice world will doubtless turn your nostalgia dial to 11. PagodaWest’s game comes complete with a fun snow world, hard fire world, trying water world, and cheeky, knowing achievement names.

The Major impresses where it counts: gameplay and innovation. This is a new and well-executed method of navigating a level that doesn’t settle for the typical shortcomings of touch input and indirect character control. It’s an easy recommendation in terms of both value and content. To say that Major Magnet is the best Sonic the Hedgehog game in years would be a statement both sarcastic and sincere.