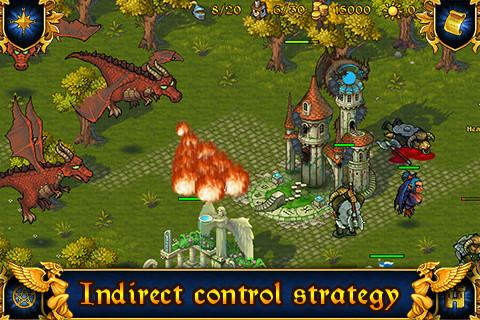 Majesty: The Fantasy Kingdom is a neat blend of RTS and RPG, but suffers a few sizable flaws

Boasting a slew of innovative and potentially amazing ideas, Majesty: The Fantasy Kingdom combines aspects of real time strategy with that of the role-playing genre. Interesting though these concepts may be, they are far greater in theory than in practice, and though many elements of Majesty shine, they are often overshadowed by cumbersome usability issues and lack of control.

So the kingdom has fallen into a bit of disarray due to the actions of the last king. To garner an idea of his madness, he declared all rats to be “sacred” and protected by law. Well, he’s dead now, and the player is charged with bringing the kingdom back to order and defeat any dark forces that lurk about. Playing primarily as an RTS, the objective is to wipe out all enemy buildings within varying sizes of maps while managing resources and defenses.

For anyone that has played a game like Command & Conquer or StarCraft, the basic concepts ought to be familiar. Players construct buildings in order to build certain types of units and to satisfy requirements for newer, more powerful buildings. As requirements are met, most structures can be upgraded, which then offers even greater capabilities.

The standard buildings are unit production buildings such as the Ranger’s or Warrior’s Guilds. From these, players are capable of producing a finite number of “heroes” in which to battle with (more on that in a bit). Other buildings, such as the Wizard’s Guild offer special units as well as castable spells to enhance play. One such spell is to explore unrevealed parts of the map without having to send units there, while another can turn units invisible in order to get them out of danger.

Such enhancements can be passive as well, and actually play into the RPG aspect of Majesty. These buildings are meant for support (e.g. a blacksmith or a market) and can be used to give heroes better armor, weapons, or even healing potions that they will use automatically if close to death. What is also of particular interest is that Majesty also gives players choices to make in terms of buildings.

Many buildings are attributed to different races such as gnomes, elves, dwarves, etc. Others will be attributed to different classes such as paladins, necromancers, barbarians, and so on. In some cases, if the player builds one type of building, they will not have access to others. Gnomes, for example, are apparently not liked by elves and dwarves. Having a “Gnome Hovel” building will allow structures to build faster and increase the rate of passive repair on damaged buildings. However, the hovel will disallow the use of elven or dwarvish features of the game. It’s a great aspect to the play, but unfortunately, the RPG elements continue, and save for the ability to level up heroes as they fight, they continue downhill. 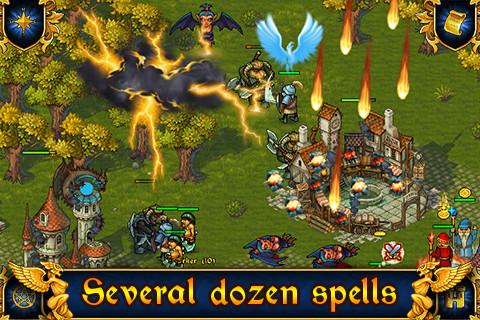 The biggest problems with Majesty are control and resource management. The former, is also a significant usability issue. Players cannot control what their units do directly. In order to issue an attack or have them move to an area, they must issue a fiscal bounty flag at the area and the non-player hero will only go there if “they” deem it is enough. The more dangerous the area, the more money that is required. This becomes problematic on two levels. For starters, even if units are attacking enemies (which they will do automatically), they tend not to attack nearby structures. Secondly, it can often lead to units being spread thin and as any strategy player knows, that that tends to lead to dead units. Also, to manage all of this, players are constantly moving in and out of pop-up menus rather than focusing on the battle screen.

This is made worse by the resource management system. As buildings are constructed, some produce passive coin (the market building also has an ability to generate some extra funds from time to time), but the primary income comes from a tax collector NPC that slowly moves about the base to take collections. Because virtually every building, unit, and command costs coins, players vastly outspend the rate of income. What this leads to is periods of sitting and waiting, as they can’t do anything with their units while money slowly replenishes. Typically, RTS games allow players to build resource gathering units at their own digression to control income, and such is just not possible here.

Presentation-wise, Majesty: The Fantasy Kingdom is decent, but it feels a little dated in terms of its art style. Nevertheless, it will still appeal to many players and does have a bit of a nostalgic feel to it. Even so, it far from makes up for the poor usability and lack of control granted to the player over their armies. The game has some fantastic ideas, and the prospect of units automatically getting potions and new armor is great. However, the lack of control and constantly having to spend money to do almost everything faster than it comes in is horridly obnoxious. All that in mind, if the game sounds interesting, it would be far wiser to try its free lite version first.