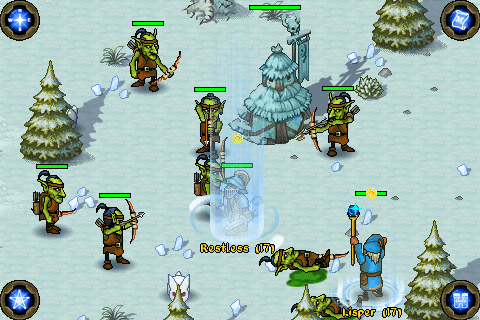 Majesty: Northern Expansion is, in a word, majestic

Majesty: The Northern Expansion is a phenomenal game. If you’re a strategy fan, you might as well save yourself a few minutes and just go get it now, because that’s going to be the wrap-up at the end of this review: buy this game. And if you’re not a strategy fan, this real-time strategy/kingdom-building hybrid might just make you one.

Majesty: The Northern Expansion is different from most real-time strategy games in one big way: it doesn’t give you direct control over any of your forces. Your hirelings are alarmingly independent thinkers, and all they seem to think about is gold – and if you want them to do anything, you’re going to have to fork it over. Need an area scouted? Pay for it. Want a goblin camp cleared out? Pay for it. Cemetery needs to be cleansed of the undead? Pay for it! And pay well, too, because if you don’t put enough money on the table, your wish will not be anybody’s command.

It’s an unusual approach to force management, because rather than playing the role of Imperial Field Marshall, organizing armies and commanding grand maneuvers, you’re more of a distant regent who finances a not-particularly-loyal gang of mercenaries to do your dirty work and leaves the details up to them. Obsessive micro-managers will probably go insane playing this game, because when it comes to things like the aforementioned goblin massacre, the best you can do is say “Make it so” and then wait for someone to tell you the job is done.

Instead, your focus will be on building, improving and expanding the boundaries of your kingdom. It’s a balancing act; your borders have to grow and your facilities – marketplaces, temples, libraries, barracks of various sorts – must be upgraded and improved in order to defeat the many challenges the game throws at you, but your coffers have to be full enough to keep your heroes happy. Spend too much too quickly or too imprudently and you’ll find yourself trapped in a paralyzed kingdom, unable to convince your minions to do much more than fiddle while your castle burns.

Graphically, Majesty: The Northern Expansion is gorgeous, boasting detailed, colorful cartoon-style visuals that would be right at home in a full-blown PC game, and it shines musically as well, with a suitably bombastic, even heroic, soundtrack. Sound effects, on the other hand, are far less impressive, useful as notifications of certain major events – the completion of a building or the death of a hero – but not much else.

There’s a lot going on in this game, particularly in the later parts of each level, and it does an admirable job of keeping it all manageable. Most functions, like placing buildings or targeting enemies, can be accessed by either a double-tap on the screen or through buttons in the user interface, and although the sheer volume of information and choices means that everything is small by necessity, the layout is clean and the controls, for the most part, are easy to grasp and use. It does suffer a bit for being such a big game on a small screen, however; finding and hopping to trouble spots in a large kingdom can be tricky, as the pop-out strategic map is relatively small even at maximum size, and textual alerts about things like the hiring of a new hero (or the death of an old one) are in such a tiny font that they’re often difficult to notice, much less read. 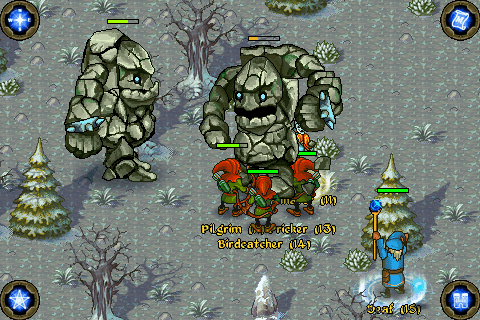 There’s also a certain lowbrow, pseudo-parody humor in play. The opening mission tasks the player with tracking down and defeating a gang of mutinous “paladinesses” who plundered their temple, “covered their nails with war paint” and then absconded to the forest, where they’ve been seen fraternizing with goblins. “Among the traitors there is my dear cousin of the aunt of the brother of my mother-in-law’s grandfather of my godfather,” it explains, but asks you to hunt them down despite that familial connection while the narrator goes off to make a new will. The next quest requires you to solve the “ink crisis,” because while the kingdom can live without food and medicine, if there’s no ink the tax collectors can’t issue levies and you won’t be able to sign any death warrants.

It’s not great comedy, but it is a great game, and with three levels of difficulty ranging from “Pacifist” to “Bloodthirsty,” players of just about any skill level can test their mettle against the marauding forces of evil. If you’ve ever had the urge to rule your own fantasy realm in a not-entirely-serious setting, Majesty: The Northern Expansion is the game for you.