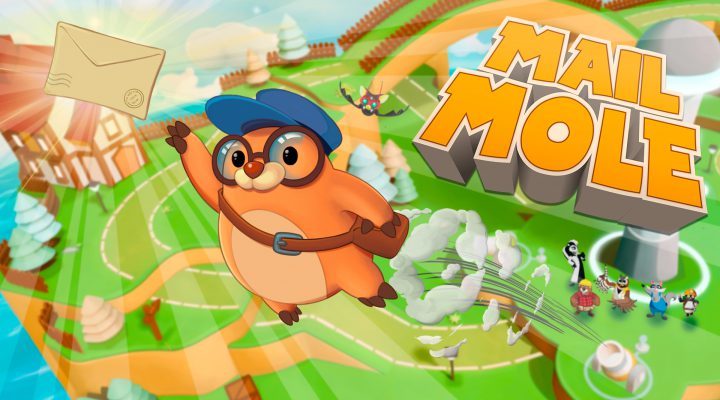 Some rough edges to the presentation

Remember Mole Mania on the Game Boy? It was a clever little puzzler – developed by Miyamoto no less – and saw you burrowing around garden patches completing tricky conundrums.

Well Mail Mole is nothing like that. In fact it barely makes any real use of the main character being a mole. Despite that it’s a very playable platformer, with no shortage of charm.

You play as Molty, and have to get the power back on for a village so a group of lazy animals can have a party. To do this you have to complete a number of linear levels and occasionally fight a turtle on an airship. This is all explained in greater detail in-game, if you require it for some reason.

Mail Mole is a true salt of the earth back to basics 3D platformer. You spend most of the time underground, represented by a patch of earth.

Molty can jump out of the ground, ground-pound, perform a barge, and dash. Despite being a mole he never has to dig holes, find hidden treasure, or anything like that.

So you’re basically performing standard platforming tasks, except with the gimmick of being a mole. You’re never doing anything a character standing on the ground couldn’t do.

The variation in the worlds alleviates this disappointment however, with a series of well thought out obstacles that the developer wrings the most out of.

So you’ve got bouncy inflatable loungers in the beach stages, platforms that alternate when you jump in the snow levels, and rotating cylinder platforms we can only assume were plucked straight from the pits of hell.

Mail Mole has few ideas of its own, and cribs heavily from games such as Banjo Kazooie, Crash Bandicoot, and every 3D Mario game under the sun.

It does so competently though, and it has a breezy charm that means its unoriginality never becomes oppressive. The levels also consistently range from fast paced to longer and more complex, which is very welcome.

Mail Mole is no cakewalk either. Despite being presented as a game for children this is not an easy game, and even gets unfairly hard when it asks you to speed-run the stages.

As soon as you have to do things quickly the game becomes more than a little ropey, and is actively difficult to control. This isn’t helped by the fact that dash is maddeningly enabled by pressing Y, and not one of the shoulder buttons.

So it’s safe to say there are some very rough edges present – some of the character models are quite frankly terrifying, and there’s a glut of typos – but Mail Mole still ends up being quite the charmer. It’s breezy no nonsense comfort food platforming.

It’s certainly an impressive first title from Talpa Games, and we’re looking forward to what it makes next.