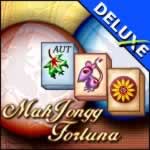 Supposedly created hundreds of years ago by philosophers or debutantes in faraway China, tile-matching game mahjongg remains one of the world’s most treasured pastimes.

Credit for the hobby’s continued popularity is no small part due to interactive tributes such as Mahjongg Fortuna, which cleverly update the ancient amusement for modern audiences by adding novel audiovisual enhancements.

So although based on classic concepts, we’re happy to report as follows. This clever virtual outing in particular keeps the treasured tabletop turned PC-ready diversion feeling as fresh as the day, many moons ago, when it was initially invented.

Starting out, you’ll begin by entering your name and birthday. (No, it won’t ask for your social security number.) Furnish the requested data, and you’ll be treated to a pleasant surprise: The program reveals your signs in both the Greek and Chinese Zodiac, and shows you your horoscope.

For example, born in September, I’m a Virgo – and as ex-girlfriends may testify, also a snake. To those of Asian descent, I’m apparently intelligent, talented, determined, romantic and charming. (All traits the wife would beg to dispute.) To the Western world, flexible and practical, and someone who likes putting his brain to use no less.

Thank heaven for that last caveat too, given how mind-boggling the featured action here is. As ever, the rules of the game remain the same.

Your mission: Faced with screens filled with tiles bearing different symbols, clear the playfield of all. The secret to doing so, simple enough – just match pairs of two boasting similar icons. Per usual though, you can only manipulate tiles which are free of obstructions on at least one of their longer sides. And, for that matter, aren’t stacked beneath other objects.

Sounds simple, right? Not so much.

Dozens of multicolored pieces, boasting everything from the likenesses of oxen and rats to seemingly hand-inked Chinese lettering, crowd every level. (Several tile sets are yours to choose from including groupings featuring Zodiac characters, seasons, tridents, scales and other random objects.) The upshot: Trying to make pairs, let alone plan long-term strategies multiple moves in advance, is like playing Where’s Waldo? on sensory overload – a drain on both the brain and senses. There’s also a ticking clock to deal with too, adding a great deal of pressure.

Still, this one’s more fun than frustrating. It’s always possible to get a hint or reshuffle the board on-command in exchange for a 30-second or 1-minute time penalty. Besides, you’ve got to think fast and react faster to get ahead, making it simultaneously both a deeply thoughtful and reflex-intensive time-killer.

Two distinct modes of play only add to the excitement.

For starters, there’s Classic, wherein you pick an individual layout -grids shaped like crabs, lions, people and more are available – and attempt to win as quickly as possible to land a high score. Also offered is an Arcade option, which lets you leap between levels while racking up score multipliers by clearing a series of grid-based stages in rapid succession.

However you elect to get down, count on being pleasantly surprised. Graphics are superb – playing pieces appear both attractive and varied, not to mention a dead ringer for the real deal – while low-key sound effects serve up an excellent aural accompaniment to the action. You’ll also dig the musical score; breezy, laid-back compositions frame each scenario, while a perky, Asian-flavored remix serves as a theme tune.

Though difficult to play in a window – expect to be squinting, even on a 23-inch monitor – and light on boundary-busting concepts/imagery, Mahjongg Fortuna nonetheless remains a superb re-imagining of an age-old classic. As such, we can’t recommend it highly enough, no matter your personality or persuasion.

Just beware of what your fortune holds. To put it in perspective: My spouse is already threatening to have me begin cleaning our home office after reading yours truly is supposedly a "great organizer." In short, for reasons of both outright addictiveness and potential mischief making, consider yourself duly warned.