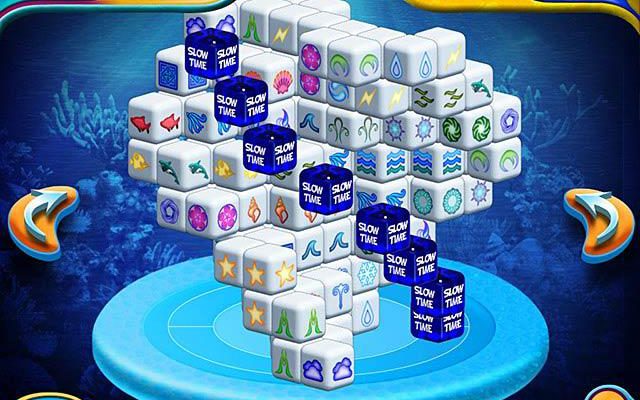 Mahjong solitaire has always been a terrific game, but if I were to sum up the experience in one word it would be “flat.” Tiles are flat. The playing field is flat. Everything is just… well, flat. Mahjongg Dimensions Deluxe breaks from this flatness by offering an experience with some depth. Quite literally, in fact. You see, Mahjongg Dimensions Deluxe isn’t like any mahjong experience you’ve ever encountered. It takes the classic formula of mahjong and brings it into the third dimension.

For those not in the know, mahjong is the classic tile matching game where a player eliminates matching sets of tiles, but can only do so if a tile isn’t blocked by another tile. It is a game that’s been around for thousands of years, and in more recent times has become a fixture in the world of casual gaming. Mahjongg Dimensions Deluxe changes this classic formula by creating puzzles that exist in three dimensions, rather than a two-dimensional puzzle laid out of a flat surface.

This new twist means matches can exist without always being visible. If a puzzle has four sides, like a cube for example, you can have a tile on the front of the puzzle that has a match on the back. You’ll need to be constantly rotating the playing field to find matches. 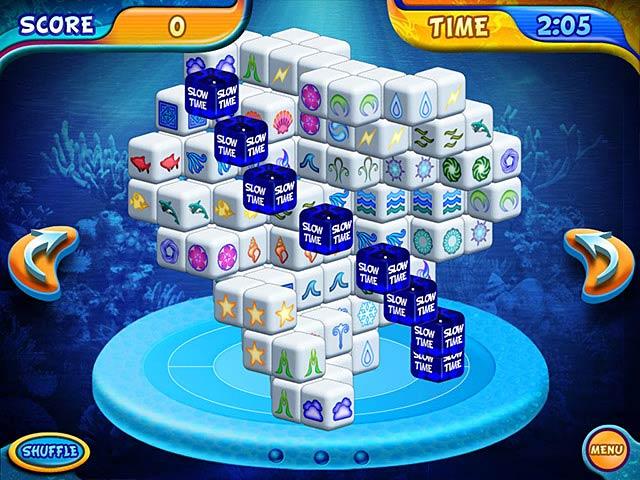 The playing field can be rotated with ease using the A and D keys, and matches are made by simply clicking on two identical blocks with the mouse. Mastering the art of three dimensional mahjong doesn’t take much getting used to, yet it never really feels old hat. Developer Arkadium has done something truly unique here, and while it may sound like a hokey gimmick on paper, the experience feels downright revolutionary.

The main game offers up 36 levels, with a new “world” being introduced every six levels. These worlds follow a certain elemental theme, like water or fire. As you reach each new world you’ll discover new special blocks that, when matched, will have a unique effect on the game. Bomb blocks, when matched, will destroy the mahjong blocks around it as well as a matching block somewhere else on the playfield. Freeze blocks will slow the timer down, giving you more time to clear away the remaining blocks in play.

The selection of special blocks was surprisingly robust, and offered some interesting effects that complimented the gameplay nicely. Often you’d find special blocks that you could play off one another; for example, there are blocks that will add time to your timer, but the amount of time these blocks contribute ticks down until the blocks are matched. Using a freeze block will slow the tickers on these blocks down, giving you a chance to clear a path to them before they outlive their usefulness.

Once you’ve finished the 36 normal levels there’s another set of 36 that you can tackle with an increased difficulty. There’s also an untimed mode for those looking for a more leisurely approach to the game. It may not sound like that hefty a package, but there’s a good amount of replay value in both the normal and hard levels. And since most levels actually contain three or four puzzles, we’re really talking about a few hundred puzzles here. Besides, the puzzles in Mahjongg Dimensions Deluxe will offer up a sizable challenge whether you’ve faced them before or not. There’s no memorizing tile placement here, so you’re going to find a fresh experience every time you jump in. 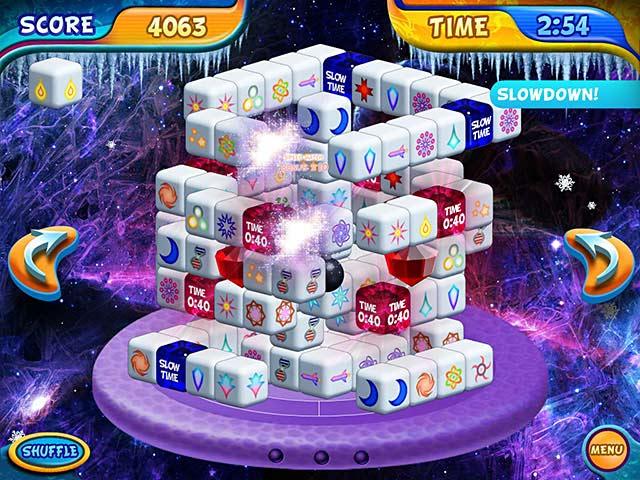 While there was little to find fault with in terms of gameplay, there was one small technical issue that really managed to dampen our spirits. The game fails to offer a selectable resolution, and the default resolution managed to cut off the top and bottom of the game when it was run in full screen mode on our PC. This won’t be a problem for all players, but given our set up we were forced to run in windowed mode if we wanted to be able to see the timer – and in this game you need to see the timer. (If you’re curious, we were playing on a 16×9 monitor with a native resolution of 1920×1080.) I can’t say for certain if this will be a problem for all widescreen gamers, but it certainly was for us.

It also seems like Arkadium missed out on a big opportunity to expand the reach of their popular Facebook game Mahjongg Dimensions. Including a slightly tweaked build of their Facebook game in their retail package seems like the next logical step for developers looking to grow their social presence, but such an inclusion was nowhere to be seen here. PopCap did this by adding Bejeweled Blitz to their iPhone version of Bejeweled 2, and it did wonders for sales of their portable product. Considering the rising popularity of Mahjongg Dimensions on Facebook, the lack of a special Facebook-connected mode for Deluxe – or even a simple link to the Facebook game – can’t go unnoticed. As a fan of both versions, I can honestly say that I’d be much more likely to revisit Deluxe if a polished up version of the Facebook game was included in the package. While far from a deal breaker, this was clearly a missed opportunity for Arkadium.

Small technical quibbles and missed opportunities aside, Mahjongg Dimensions Deluxe offered up a wonderful new experience in the traditionally tried-and-true world of mahjong solitaire. Massive three dimensional puzzles that force you to spin the playing field offer up a new challenge all on their own, and the addition of a swift but fair timer means that the game remains challenging even when you’ve mastered its unique twist. Mahjong fan should stand up and take notice – this is the biggest thing to happen to the genre in a long time.