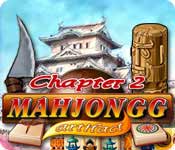 Considering that the classic game that it’s based on is literally centuries of years old, at face value, you’d think it would be hard for Mahjongg Artifacts 2 to innovate on a winning formula. Thankfully, you’d also be wrong, as the popular series strikes gold yet again in its latest installment, which offers more tile-matching, treasure-hunting fun for enthusiasts of all types.

Starting out on a bright note, you’ll find that three individual modes of play are offered: Quest, Classic and Endless. While each is entertaining unto its own right, offering hours of enjoyment and five selectable tile sets based on various exotic themes (e.g. desert life or Asian motifs), we humbly suggest that you focus first and foremost on the core story-based adventure. Granted, if you haven’t been keeping track of the plot thus far, it’s a little hard to follow the narrative, which now involves your hunt for a lost explorer who’d previously saved the world’s bacon. But even if you can’t decipher the underlying tale, portrayed via a catchy series of comic book-style art panels, not to worry… actual play itself more than makes up for any literary shortcomings.

Let’s get something straight up-front: If you’re not already a fan of tile-swapping tabletop family game night favorite mahjongg already, the title won’t make you a believer. But delivering a knockout one-two punch in terms of a highly polished audiovisual presentation and puzzles that prove fiendishly challenging, yet never insurmountable for those who put in the requisite time and effort, there’s much for existing converts to crow over regardless.

By far and away, the greatest asset here from a design standpoint is sheer elegance. On the one hand, you simply move through individual level layouts via an intuitive, mouse-driven interface, clicking to pair tiles with matching shapes stamped upon them. However, stunning iconography (think elephant riders in brightly-colored howdahs, coiled green dragons, horseback riders rearing and pixel-perfect calligraphy); subtle animations including shimmering halos and fog which drifts across gripping backgrounds; and a delightful musical score that changes based on the country (i.e. Tibet, Japan, India, etc.) you visit adds an authentic atmosphere of mystery and excitement that’s missing from most competitors.

Pile on a subtle economic model that’s based on collecting pearls you can spend to receive hints, undo moves or shuffle the board, and the overall design framework simply works that much better. Speaking further to the level of tender loving care invested in the outing, the designers have even topped the proceedings off with well-implemented power-ups that let you swap tiles, randomize object placement or shift certain playing pieces up or down a level.

Be thankful for all these touches, because it makes the many times lengthy process of trial and error needed to pass each challenge (cast as an individual area on a global map you’ll traverse to see the tale through) that much more palatable. Ditto for the ability to collect interesting clues such as beads, knives, rattles, potions and dolls along the way that add to plot’s overall appeal. While a little more characterization would’ve been nice, as would some mid-mission activities or mini-games to help break up the monotony which otherwise eventually sets in, it’s hard to look a gift horse in the mouth. Less nondescript, more user-friendly (you even get an option for quickly seeing which titles are uncovered, and thus available for play on the board, at a glance) than the average genre staple, Mahjonng Artifacts 2 proves a welcome category addition.

Could you find better ways to pass the time if you’re looking for something a little more action-packed or emotionally rousing? Certainly… but with that said, don’t be so quick to write this one off. Those who enjoyed the game’s predecessor, or are seeking somewhat familiar thrills wrapped in glossy packaging that makes the same old, tried-and-true tile-swapping formula seem fresh and new again are duly advised to give it a shot.