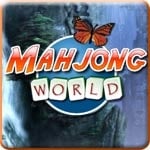 Casual gamers who want a relaxing time-waster won’t find anything more therapeutic than a Mahjong game.

These ancient Chinese solitaire diversions are a perfect way to melt away the day’s stressors, whether it’s during the last few minutes of a coffee break at work, at the end of a hectic day at the office or on a rainy Sunday afternoon.

Many casual game developers have taken a stab at creating the ultimate digital Mahjong experience, many of which have been met with critical and commercial success. So it’s not easy to launch another "me too" product – but developers Inertia Software have done a great job with Mahjong World.

This new game might not do much to advance the genre by throwing in interesting new twists, but it’s a well-rounded game with plenty to do and see.

In case you’ve never played a Mahjong game in your life, they are solitary puzzle games whereby players are presented with a board of tiles and you must successfully match two identical tiles in order for them to clear the screen; your goal is to clear the entire board. In some cases the tiles don’t need to be the same, such as two red bamboo shoots, but might be paired by theme, such as two out of the four seasons (say Summer and Winter) or two different kinds of flowers.

The rules state that only tiles with at least one side free can be used to pair with another one, therefore just because you can see many tiles on the board – viewed from a top-down perspective – doesn’t mean all will be accessible to you. Typically, the tiles on the edge of the pile or at the top of the pile can be clicked to make a match.

Mahjong World also adds a points scheme (a certain number value per tile) and a timer, so if you’d like to compete with others around the world, you can. It’s not multiplayer, but a high-score board will compare your accomplishments with others.

Aside from its colorful graphics and soothing music, this game’s strengths lie in the sheer number of options presented to the player. For one, you can pick from literally hundreds of board layout shapes to play, be it a Zodiac sign, a letter of the alphabet or other shapes like guns, vertical and horizontal bars, the classic Pong video game, and many other clever patterns. When you launch the game you’ll also see that it automatically downloaded new levels for you (if you have an "always-on" broadband connection, of course). Seven new tile layouts were downloaded and added to the master list before I even played one game.

Another differentiator is Mahjong World offers many tile sets to choose from, ranging from traditional Chinese letters and symbols to Egyptian hieroglyphics to playing card faces and country flags. Players can also work towards unlocking special tile sets the better they play, beginning with nine Dragon tiles to collect, then nine bronze tiles, followed by nine silver tiles and finally, nine gold tiles; this feature adds to the game’s charm and replayability.

Mahjong World doesn’t add anything wildly different to the basic formula – no power-up tiles, exotic locations, story elements or multiplayer modes – but what it does offer is highly-polished classic game with many board shapes, tile sets and collectible tiles, and a high-score board, all of which should please fans of the genre.

Travelogue 360: Rome – The Curse of the Necklace Review