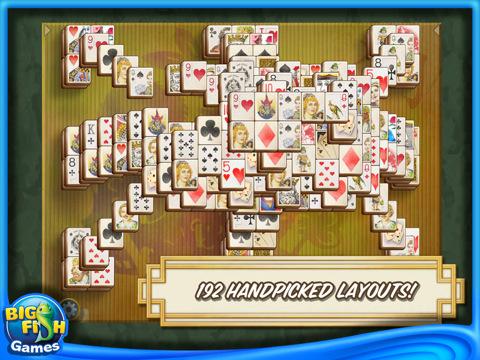 I’ve been enamoured with mahjong on different digital platforms for years now. Back in the day I used to enjoy importing games from overseas, but not being able to speak the language put a pretty severe limit on the kinds of games I could play correctly. So mahjong, with it’s easy to understand rules and no need for reading/writing a different language, was a perfect game to try out. Nowadays mahjong is a mainstay of the casual game world regardless of country, so it’s something most of us have been exposed to, and I’ve played a lot of them. Pound for pound, Mahjong Towers Touch hangs with the best of them.

A game of mahjong is made up a bunch of different tiles with varying pictures and numbers on them (sort of like dominoes). They’re laid out and stacked up in different configurations face up on a table. You then pick up matching pairs of tiles and remove them from the board. Only tiles you can see are free to be grabbed, as well as tiles that have at least one of their sides exposed. Tiles with other tiles to the left and right of them are locked until you can free them up (tiles above or below them have no effect).

Once you clear the entire board you’ll move onto the next one. If you ever find yourself in a position where you can’t make any more moves (because everything you can pair up is blocked) then you can either shuffle the tiles to get a different layout, or back up to find a different path to take. The game scores you on how few of those undo and shuffles you use to beat each level.

What I love most about Mahjong Towers Touch is just the zen feel I get while playing it. It’s a relaxed, slow paced game that employs simple conventional rules into a gorgeous game that doesn’t get in its own way by trying to be fancy. It offers a solid, well built mahjong game that looks and acts beautiful.

The biggest ringing endorsement I can give to Mahjong Towers Touch is just the amount of puzzles are included in the game. There are 12 different animals representing different portions of the calendar, and each of those areas has 45 different puzzles. That’s 540 different levels! It’s more than enough to justify its low price tag, providing hours of relaxed solitaire entertainment.

As a digital solitare game, it’s hard to beat mahjong. It’s more interesting and varied that solitaire card games to me (though that’s personal preference) and most of us don’t have a tile set laying around, so making it digital gives us access we wouldn’t otherwise have. Having the scoring and rules right there in front of you handled by the machine also make it easier to learn if you are just dipping a toe into the mahjong waters for the first time.