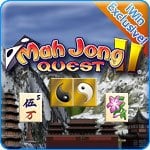 Has a casual game ever left you feeling shortchanged? Perhaps you burned through the story mode too quickly or there weren’t enough extras to keep you interested after you’d completed the main part of the offering. That’s not a problem with Mah Jong Quest II from iWin, a sequel that could keep you matching pairs for weeks on end before you see everything the game has to offer.

Mah Jong Quest II reconnects players with Kwazi, the main character from the original, who’s grown from a child to a teenager. At the outset, lightning strikes our hero (or heroine) while he (or she) is sitting outside a cafÃ©, splitting him (or her) into male and female personas representing Ying and Yang, the absolute opposites of the universe. If you’re hoping for an answer to the question of Kwazi’s gender, start looking forward to the next installment in the series. In part two, you’ll be more concerned with bringing balance to the cosmos by solving Mahjong puzzles.

At its heart, Mah Jong Quest II is a tile matching game, meaning you must click on matching tiles to remove them from the board. In addition, selectable tiles must be unblocked to the left and right, and have no tiles above them.

That’s where the chief similarities to traditional Mahjong end. While you’re given a limited amount of time in which to accomplish the goal for a level, your mission isn’t to eliminate all of the tiles from the board, but to free up the Ying and Yang symbols, as in the first Mah Jong Quest. Once you match these well-hidden pieces, the rest of the tiles disappear, granting you bonus points for each one. This simple rule change forces you to pay close attention to which tiles you’re removing if you want to earn a decent score.

What’s more, most of the layouts in Mah Jong Quest II contain special tiles that call for new strategies. For instance, some layouts feature brick tiles that must be freed and then matched with a tile containing dynamite. Other levels feature ice blocks that melt when freed. Another cool twist is the earthquake tiles, which shatter a layout into multiple pieces, liberating tiles in the process. In what’s sure to be a fan favorite, yet another twist sends a monster shambling back and forth across the screen to strike a gong at either end. As the sound resonates through your speakers, the location of each tile changes. To keep the creature from reaching the end of your display, you must make a match, which sends him walking in the opposite direction.

Additional surprises will keep you on your toes, such as being asked to removes tiles in threes instead of twos. Although it sounds like Mah Jong Quest II throws a lot at you, each innovation is introduced on its own, and you’re given plenty of time to become accustomed to the new rules and develop fresh strategies before the puzzles get tough.

The story mode in Mah Jong Quest II is dubbed Kwazi’s Quest. It features eight worlds containing eight levels each. The narrative, which is a bit thin, is rendered in lackluster cinematics shown in a tiny window. Because the animation throughout the rest of the game is so good, the lack of energy in the storytelling is disappointing.

But the amount of variety in the second single-player mode, which offers 144 classic layouts, more than compensates for the shortcomings in the plot. There are four groups of levels, including normal sized puzzles, double sized puzzles, original Kwazi puzzles and triple play puzzles, all of which can be played using one of six Mahjong variations. Examples of the latter include Speed, in which all visible tiles can be matched; Mixer, in which tiles switch places indiscriminately throughout the match; and Memory, in which the layout is visible but the tiles aren’t shown until you hover over them.

iWin also threw in a new Tournament mode not seen in the first Mah Jong Quest. According to marketing materials, this part of the game allows you to play against competitors online. The goal in each contest is to score the most points before time runs out, with three varieties of coin tiles acting as multipliers. If you run out of moves, a Typhoon that rearranges the layout is provided.

Unfortunately, iWin opted to have Mah Jong Quest II automatically find opponents for you instead of giving you the ability to locate and play against a friend. If the logic behind this move was to keep the program as casual gamer friendly as possible, the choice was ill-advised since even most novice computer users can find their friends using a host of chat applications. If iWin was cutting corners, here’s hoping the game does well enough to encourage an upgrade that provides more functionality.

Also, in a remarkable "coincidence," I was assigned the same opponent during my first Tournament game on two different computers. While playing the registered version on one computer on a Sunday morning and the demo on another computer on a Monday afternoon, I was pitted against "laura" who was in her "livingroom" and had a ranking of "1578." Hmmm. Does Mah Jong Quest II activate artificial opponents when no human competitors can be found?

Reservations aside, Mah Jong Quest II is a solid follow-up to the original. It has four times the content, new twists and better animation during gameplay. Although the game doesn’t take off in radical new directions and the multiplayer mode falls short, Mah Jong Quest II gives players plenty to keep them happy for a long time.