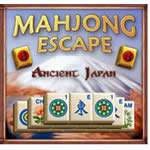 The first Mahjong Escape took players on a jaunt through Ancient China, where they absorbed Chinese history and proverbs while playing the tile-matching game of Mahjong. In part two, the adventure continues in Ancient Japan with beautifully-rendered Japanese settings and lush, authentic Japanese music.

In Mahjong (also known as Shanghai), players are given an arrangement of tiles on a board and have to remove two identical tiles at a time until the board is cleared. The player can only remove "free" tiles that are not covered by other tiles or hemmed in on either side. Moves must be considered carefully so as not to leave tiles stranded. There is typically more than one way to clear a board, and making a move without considering the consequences can lead to a dead end.

Special flower and season tiles can be matched to other tiles of the same type (for example, cherry and bamboo or summer and winter).

The main mode in Ancient Japan, called Emperor’s Adventure, begins in 8,500 BC and winds its way through twelve Japanese dynasties spanning 60 different Mahjong boards. As players clear each board, they’ll unlock words of wisdom like "Fall down seven times, get up eight" and "The heart that loves is always young." Clearing a dynasty unlocks new background art and ancient treasure.

As in the first game, special tiles are a big part of the gameplay in Mahjong Escape: Ancient Japan. Players can automatically move on to the next board by uncovering and matching two golden tiles, regardless of how many other tiles are remaining. There’s also a magnet tile that draws out any tile whether it’s free or not; joker tiles that clear all remaining tiles of a particular type from the board; and key tiles that open corresponding lock tiles elsewhere on the board.

In Classic Mode, players have access to a further 162 boards that offer a range of classic tile setups as well as fun and contemporary shapes like bonsai tree, hawk and harp. There are no special tiles in classic mode. You can pick and choose a board to play, or play them one after the other in sequence.

If you run out of moves, the game gives you the option of undoing the last move, shuffling the tiles, or clicking on a "hint" feature that reveals a possible move – with a penalty of taking away points from your overall score and fastest time. You can also turn on an option that illuminates all the free tiles on the board, which makes it much easier to see potential moves.

While the new setting, music and boards are enough to distinguish Ancient Japan from its predecessor Ancient China, I was disappointed to see the same six uninspired (and strangely conservative) tile sets on offer. Surely Japan, with its rich mythology, history and artistic traditions, could have easily provided the inspiration for some cooler looking tile sets.

Gripes aside, with more than 200 boards to play (many of which boast extremely creative arrangements), Mahjong Escape: Ancient Japan is a solid addition to any Mahjong lover’s game library.