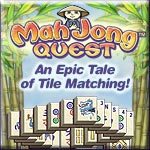 A journey around China in the sandals of young Kwazi is the backdrop for Mah Jong Quest, iWin’s foray into the popular Mah Jong category. iWin has taken the time tested mechanics of Mah Jong and put a story to it. You’ll travel from province to province as a child hero of indeterminate gender, solving puzzles and restoring the razed remains of the landscape with the power of the Tao. On your way you’ll be guided by all the animals of the Chinese zodiac, coaxing you along your Mah Jong Quest with rhymes and riddles.

Sounds a little strange for a simple Mah Jong game, doesn’t it? Good thing for us that iWin has a good reason for all of this, pairing that genuinely fluffy story with some new gameplay twists to the old classic style. What results is a charming, mesmerizing, and surprisingly intellectual game.

In Kwazi’s Quest, the objective, unlike the usual click-and-match, clear-the-board style of Maj Jong, has you searching out two particular tiles: the golden Yin and Yang. If those two tiles are uncovered and matched, all the remaining tiles on the board vanish, granting you more points than you would have received for matching them normally. This means that in order to reach the highest scores, you’ll want to resist that urge to get rid of whatever matches you find and strategize a bit: what is the minimum number of matches you can make while seeking the Yin and Yang?

Other special tiles litter the board, offering many more ways to play; a simple tutorial accompanying the introduction of every one. Dynamite destroys stone walls that block your path, freeing trapped tiles. A magnet can pull any tile into the open, even if it is buried under others. A whirlwind matched to any tile whisks away all the matching tiles of that type. All of these tools are there to help, and you will need them. The puzzles become quite challenging as the game goes on. Thankfully, the old amenities of Maj Jong – hint and undo – are also ready for the clicking.

If you’re looking for the traditional style of Mah Jong play, Mah Jong Quest accommodates you nicely with 88 classic board layouts playable in five special modes, like Memory, where the tiles are laid out face-down, and Ghost, where the tiles are invisible until you move your mouse over them, fading away again after a few seconds. Were that not enough, Mah Jong Quest also includes an additional 80 special puzzles with specific matching rules. Needless to say, there’s more than enough to keep you clicking.

While not quite reaching the highest marks of beauty, Mah Jong Quest is crisp and colorful, with serene backdrops and distinct tile markings. The cinematics that drive Kwazi’s Quest are more mundane than they are eye-popping, but serve their purpose in presenting a silly, child-friendly storyline with their utterly horrible rhymes.

The music is tranquil, as Mah Jong soundtracks must be; enchanting in a way that allows you to become fully enwrapped in long play sessions. There might have been a bit more variation in the music’s themes, one or two more tracks to listen to, but even without it is audibly pleasant.

The trial period on the demo should give you just enough opportunity to check out the many game modes and start in on Kwazi’s Quest, a long journey, to be sure. It’s silly, but strangely charming at the same time. For Mah Jong fans, Mah Jong Quest is well worth the download.