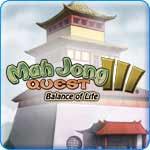 Mahjong solitaire may be played with mahjong tiles, but it’s very different from the traditional four-person game played in Asia. Instead, mahjong solitaire is reportedly based off of an Ancient Chinese matching game called "the Turtle." Mah Jong Quest III follows in these age-old footsteps, with a bunch of new challenges for players seeking a serious mahjong experience.

What is the meaning of life? Which is the path to happiness? Like many of us, Kwazi seeks the answers. For those of you who have followed the curious tale of Kwazi from the beginning, the mystery of his formerly ambiguous gender is revealed – he is indeed a “he.” Starting with his birth and early childhood in a Chinese mountaintop monastery, through the trials of adolescence, and ending with his life as a wise old man at seventy-two, Kwazi seeks to find the ultimate truth with the help of his grandfather’s powerful ancient Mah Jong set.

As you follow Kwazi’s Quest (which is the game’s story mode), you will encounter 72 mah jong layouts, one for each year of his life. The basic concept is the same as most other mah jong solitaire games. You must match up tiles of the same type, drawing from only those tiles which are open or exposed to the left or right. The overall goal in Mah Jong Quest III is to uncover and match the golden Yin and Yang tiles in as few matches as possible.

Levels become more and more challenging and complex as you proceed, adding new features as you go. Some will be familiar to you if you’ve played earlier versions of the game. Butterfly tiles can be paired with any other tile on the board, lifting it up so that it’s open for matching. Ice tiles melt when exposed, and fire tiles allow you to match otherwise unselectable tiles. Firecrackers blast through walls, and magnets help you draw away undesirables. Typhoon tiles clear away all tiles of the selected type. Although it seems like a lot, each of these are added gradually, so you have plenty of time to become familiar with a concept before a new one is added.

Throughout the game, you are subtly timed, which is indicated by the gradual filling-in of the dragon at the top of the screen. You can undo your previous moves, or replay each level as you wish, although you will lose life if you choose to reshuffle and replay a board with a new timer.

As you complete each level, you are asked to answer a question which affects Kwazi’s life path, and the answers you choose affect how the story progresses. The energies in Kwazi’s life move in and out of balance depending on the choices you make, and are shown in the corner of the screen.

If you prefer to play Mahjong without any story, there is a “Freeplay” mode in the main menu. You can select between classic normal sized, double sized, or triple sized options (which refers to the amount of tiles used in the layout), with over 600 unique layouts to play. There are even triple tile match layouts, where each tile type must be matched three at a time.

If you’d rather to try your skills against an opponent, “Tournament” mode will connect you with a player online, based on your skill level. There’s also “Variations” mode, which allows you to play all of the layouts from Mah Jong Quest I and II, just in case you missed the earlier games in the series.

The “Brainteasers” are particularly challenging, offering mah jong games with varying special objectives. “Mah Jing” has you matching in 7s, and “Half and Half” challenges you to balance the board as you play. For a timed challenge, “Extreme Mah Jong,” has you starting with one minute on the clock, and gaining more time for matches made. Try to get highest score possible – it’s tough!

What’s most impressive about Mah Jong Quest III is the extensive amount of power-ups available as you play. It’s definitely not designed for beginner players, but it’s perfect for those who truly enjoy mah jong solitaire and want a really serious challenge. Even if you’ve played this genre to death, you are guaranteed to find something new in this title.

The music is suitable for a relaxing mah jong game, without making itself too noticeable. The graphics are reasonably well done 2D, with still backgrounds and lots of bright colors, although the top down perspective made it more difficult to see which tiles were available.

If you want eye candy, Alice’s Magical Mahjong will offer a bit more, but without the Chinese atmosphere. If on the other hand you’re looking for a decent storyline, Mahjong Quest III is philosophical, and arguably more interesting than earlier versions, though perhaps not as involved or engaging as Mahjong Tales: Ancient Wisdom.

Still, with good production values and an impressive variety of power ups, Mah Jong Quest III is great escapism for advanced Mah Jong solitaire afficianadoes. There’s plenty of replay value for fans, and it takes quite a while to explore all of the special features that the game has to offer.