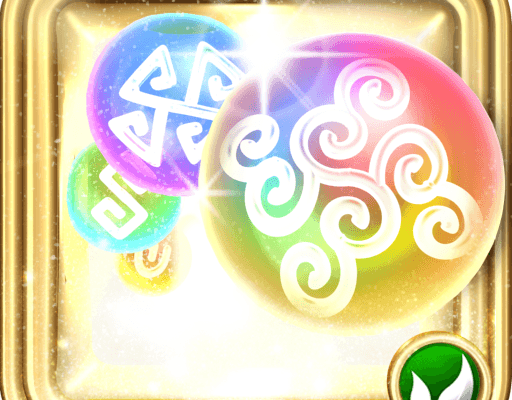 When Osmos made the transition to the iPad, it was a perfect fit; pushing around bubbles with your fingers just felt natural. MagniFusion attempts to take a similar concept and add some puzzle and arcade elements to it, and it’s largely successful. Unfortunately, the loose controls undermine what’s otherwise a solid puzzle experience.

The main mode in MagniFusion is the arcade portion. In it, you’ll be presented with a screen that slowly fills up with bubbles. You can merge bubbles of the same size and color to make bigger ones, and every so often a colored laser beam moves across the screen allowing you to pop any similar colored bubbles it hits. The bigger the bubble, the more points you get. Things start out slowly, but new bubbles will appear at increasingly faster rates and the laser beam will also recharge quicker and quicker. So, the longer you play, the more hectic things get.

The goal is to rack up as high a score as possible, and it’s game over when the screen gets too full. There are three different levels of difficulty, and the later two add in some extra obstacles to make things more challenging. Bubbles will appear that will keep growing and growing until you pop them, and the edges of screen will become icy, temporarily freezing anything that touches them. The difficulty curve is perfect, allowing you to get accustomed to new mechanics before the challenge really ramps up. In addition to the challenge of high scores, the game also features a trophy system that gives you even more incentive to keep playing.

There’s also a puzzle mode, which shares the same basic mechanic but puts it in a whole new context. In it, you’ll have to combine all of the like colored bubbles on screen, all within a specified period of time. But to do so you’ll have to navigate a series of obstacles, like holes and walls, that make things difficult. There’s a good amount of variety to the different puzzles, and with 14 different chapters to play through, there’s quite a bit of content.

The two different game modes complement each other nicely, providing two distinctly different forms of play. But the major problem with the game lies in its controls. The in-game tutorial warns you to move slowly and carefully, and this is very true. If you attempt to move bubbles quickly they’ll simply fly around the screen wildly. But even when you try and go slow, the controls are often unresponsive. Sometimes a bubble won’t move along with your finger, and sometimes two bubbles won’t merge for no apparent reason. And an accidental touch can send one flying. It’s not so bad in the arcade mode where precision isn’t key, but in the puzzle mode the controls will lead to many unnecessary failures.

It’s a shame the controls manage to mar what’s an otherwise fresh and challenging puzzler. The arcade mode manages to tap into that primal need to rack up a massive high score, while the puzzle mode provides some solid cranium scratching challenges. But there will be times when you fail, not because of an error on your part, but because of the controls. And there’s nothing more frustrating than that.