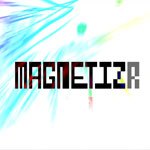 When I think of magnets, the first thing that comes to mind is my fridge. I have magnets shaped like every state I've visited. My fridge is covered in magnetic letters and numbers that my kids use to practice their spelling. We even have a handy magnetic clipboard we use to keep track of what we need to replace in our pantry. But magnets can be so much cooler than that. Remember that science kit you had as a kid? The one with the really strong magnetic blocks that attracted and repelled each other? MagnetiZR is more like that than your silly old fridge. It tries to recapture the awe-inspiring sense of magnetic discovery we all had as kids, and as a free flash-based puzzler it does a great job of re-instilling that sense of wonder.

The idea behind MagnetiZR is simple. You'll need to guide a laser to its target using the attractive power of magnets. Some magnets will attract, some will repel, and some will offer neat new twists that real magnets could never do. You'll be able to move the magnets around as much as you need to until you finally get it right and make the connection. As the game goes on you'll encounter new challenges like multiple lasers or objects blocking your path. A variety of magnets will be introduced as well. Early on you'll be greeted to some fairly simple magnets like a negative polarity magnet and magnets that aim the laser in different directions. Later on you'll be treated to slightly more complex fare like magnets that will teleport your laser or giant negative magnets in the middle of your screen.

MangetiZR provides added incentive for those looking to replay the levels they've already conquered. Each stage in MagnetiZR offers up a Challenge goal and a Time Attack goal. Time Attack is fairly self-explanatory (win in 14 seconds, that sort of thing) whereas challenge provides you with a stage specific goal. In some instances you'll be asked to solve the puzzle using only 2 magnets. In other instances you'll need to win by shooting the lasers 4 or less times. Each stage has its own challenge, which means replaying past content will never really get dull.

Failed attempts at guiding the laser are left behind in the form of a paint-like trail. This little touch really helps provide guidance in where to move the magnets on your next attempt, but it means the playfield will get a little messy after a few attempts. The game provides a “clean” button that will wash away all the paint, but that also means that last attempt you were hoping to have guide you will be gone as well. Still, if you don't mind adding another attempt into your scorekeeping you can simply run the laser again after cleaning to see exactly where that last shot took you.

The game also allows you three “skips,” which will let you skip a level if you just can't seem to get a certain puzzle solved. Limiting the number of skips is a nice touch as it means that you won't simply blow through the game whenever you're having a problem, yet you'll never get so stuck that you can't get past a certain puzzle. For the first half of the game, these skips prove a really useful tool and would probably have remained just as useful if this game didn't develop a crippling difficulty about halfway through.

The first 12 levels of MagnetiZRr are fun, engaging, and challenging puzzles. From 13 on, the difficulty goes from fun to brutal. The concept of “stasis” is introduced, which supposedly slows down the laser by the use of moving objects. No matter how long we tried, we just couldn't figure out what the purpose of stasis was or how it worked. Around the same time that stasis was introduced the puzzles became so large with so many moving parts that nothing short of a physics degree would ever get you through them. It was like hitting a brick wall. Nothing survived – not even the fun.

MagnetiZR introduces a unique puzzle mechanic in the physics of magnets, and when the game was accessible we found the whole affair rather attractive (that's a little magnet humor for you right there). Once we got out of the first dozen stages, things became far too difficult and complicated to hold our interest. If you're looking for a great new puzzle mechanic, you'll fall in love with the first half of MagnetiZR. It's just a shame that the whole game couldn't remain accessible as those first 12 stages.