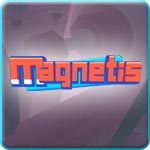 Attraction is the name of the game in new studio Yullaby’s new magnet-themed puzzle game Magnetis. While the game has a great funky aesthetic and gameplay concept, a few glaring issues keep the game from pulling you all the way in.

The basic gameplay is very simple, and admittedly a great idea. Two tiles fall from a central shaft above a conveyor belt that you control with the arrow keys on your keyboard. The tiles can be a left- or right-facing magnet, or gray box. The goal is to make chains between two magnets that are facing each other. The more gray boxes you can put in between those magnets, the longer the chain.

There’s just one hitch: There are two colors of magnets. If you mix up the colors, the nice gray boxes turn into ugly dark X-shaped boxes, which can only be destroyed by making a proper chain nearby. Of course, if you can cause more than one chain to form in a single drop, you’ll earn big bonus points. Don’t let the boxes pile up to the top of the screen, or it’s game over. It’s very simple to understand, and very effective.

The game has a very cool tech-y vibe, with bright colors and cool bouncy beats. If you can put the game at its highest settings, the graphics have a lovely sheen to them.

Unfortunately, Magnetis has a variety of little issues that add up. First of all, there is a very limited tutorial. While it explains the basics of gameplay, it doesn’t tell you some key details, like being able to swap the two tiles that are dropping (by pressing the up arrow). I didn’t realize this until about 30 minutes into the game, and even then, found out only by a slip of my finger.

Next is the way the game is actually controlled. Rather than moving the tiles left or right, the conveyer belt is what moves. This can be very confusing at first, but more unfortunate is its length. The conveyor belt functions like a loop, where you can see the end of the chain on the opposite side of the conveyor belt. However, the length is very short, leading either to confusion or feeling like the playfield is a little bit cramped.

An interesting side effect to the conveyor belt is the amount of forgiveness Magnetis will give you. As long as the conveyor belt is moving, the piece won’t settle into place. Also, the belt can move indefinitely as long as a piece isn’t settled into place. On the one hand, it means "almost" moves can be fixed without penalty. On the flipside, however, one little twitch of your finger and the perfect drop is undone.

Another issue with Magnetis is its difficulty. The game starts out gently enough, but after only about six or seven levels becomes very fast. With combos being the only way to get a really high score, you’ll have to manage tall stacks with boxes dropping at high speeds if you want to try to get onto the game’s high score board. Without a practice mode to try, you’ll be restarting quite a few times before you get the hang of it.

And that’s probably the biggest drawback to the game: lack of modes. There is a normal arcade-style mode, a timed mode (get as many points in 165 seconds, though it’s unclear why it’s 165 seconds rather than a simple three minutes), and a multiplayer mode where two to four people can play against each other using the same keyboard. (Of course, the extra players aren’t told which keys they’re supposed to use – they have to figure it out themselves.) There are no unlockables, achievements or anything else to mention. Though it’s understandable to want to keep a puzzle game simple, the mechanics here don’t warrant such simplicity.

It really is a shame to have so many negatives with a game that you want to root for. Magnetis has all the right ingredients of an awesome game – a simple yet addictive concept, a unique presentation – but still feels underdeveloped. If Yullaby can expand on the foundations they have laid here, we will have a fantastic puzzle game on our hands. As things stand, Magnetis has a few issues that interfere with it. Try the demo to see if Magnetis attracts you.