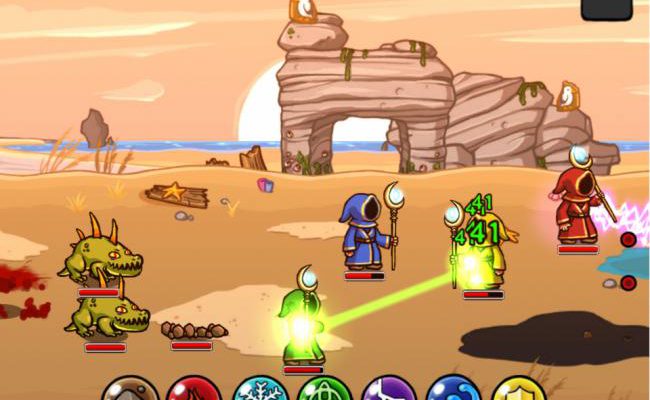 Magicka casts a charming spell over the mobile action-adventure genre.

If you’ve been searching for the next great action-adventure game to play on your mobile device, then look no further, because Magicka is here. Taking everything that made the PC Magicka titles so great and refining them further, the best way that I can describe Magicka: Wizards of the Square Tablet is that it plays like a mobile touchscreen version of games like Castle Crashers; and yes, it’s as amazing as it sounds.

At its core, the game plays like a more action-oriented version of Battleheart, where you feel much more in control over your character’s actions. Each level consists of a nicely-paced sidescrolling area, with tons of enemies to fight and lots of gold coins to plunder. You move your wizard by tapping and holding down on different areas on the screen, and you can even pick up enemies with your finger and slam them on the ground (which just feels so much more satisfying than it probably should).

At the bottom of the screen, you have seven elemental icons which form the basis of each attack or defense maneuver you can perform in the game: these include earth, fire, ice, healing, lightening, water, and shield. For instance, tap on the lightning bolt four times, and then tap on an enemy, and you will unleash a deadly electric attack that lasts for a good amount of time. But the game encourages you to experiment with different spell combinations to uncover even deadlier attacks, like the Thunder Bolt (fire, lightning, lightning, fire) or the Meteor Storm (fire, earth, water, fire). These special attacks are truly awesome to see in action, and all of your unlocked magick spells will be conveniently stored in the Book of Knowledge for your perusal. You’ll almost wish you had a third hand at times so you can cast more spells even faster!

The sharp cartoon visuals and smooth animations are polished to perfection, and in my time with the game, I traversed every kind of terrain I could think of: from snowy mountains, to sunny beaches, and grassy highlands. Even the world maps are beautifully designed. But the amazing variety in environments doesn’t even match the variety of enemy types, as you will encounter everything from goblins, to ghosts, to zombies, to swamp monsters, and even land sharks. And this is all without even mentioning the game’s epic boss fights. I don’t want to give too much away, but just take my word when I say that the “Big Friendly Crab” boss is not exactly so friendly. 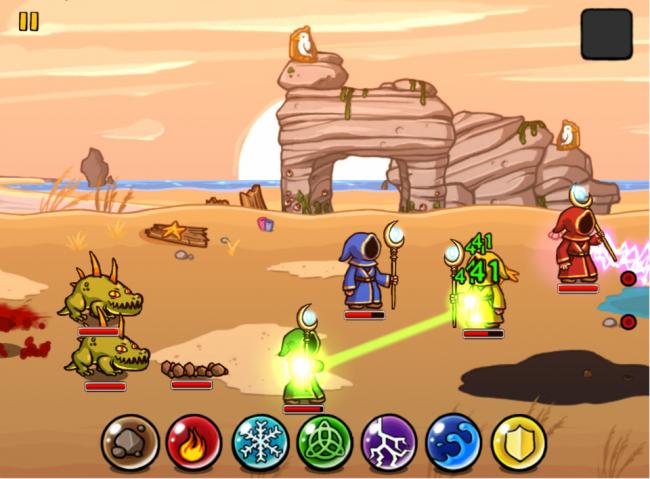 In addition to the main storyline, Wizards of the Square Tablet also features a number of fun side quests and a handful of battle arenas that let you see how long you can survive against endless waves of increasingly difficult enemies. The only small problem I ever encountered in the game was a few crash issues that occurred when I was going through the opening tutorial. The crashes forced me to repeat the short tutorial a handful of times, but I never experienced these technical hiccups in any parts of the main game, and I’m sure it’s nothing that a simple patch couldn’t fix.

The game has a huge emphasis on logic, and punishes players who tend to blindly cast spells without thinking. For instance, walk through a puddle and then try to cast a lightening spell, and you will be met with a pretty nasty shock. Walk through fire, and you’ll quickly need to cast a water spell on yourself or risk taking damage. The game also has a downright hilarious and self-described “semi-inappropriate” sense of humor that will have you shaking your head and laughing out loud at every turn. Wizards of the Square Tablet likes to mess with you too, so be warned. In one early level called “The Trolling Cave,” I came across a tantalizing message board that was surrounded by a dangerous ring of molten hot coals. Naturally, I crossed the coals and set my wizard on fire, just to read the oh-so helpful advice: “Beware of hot coals!” You win this time, Magicka. 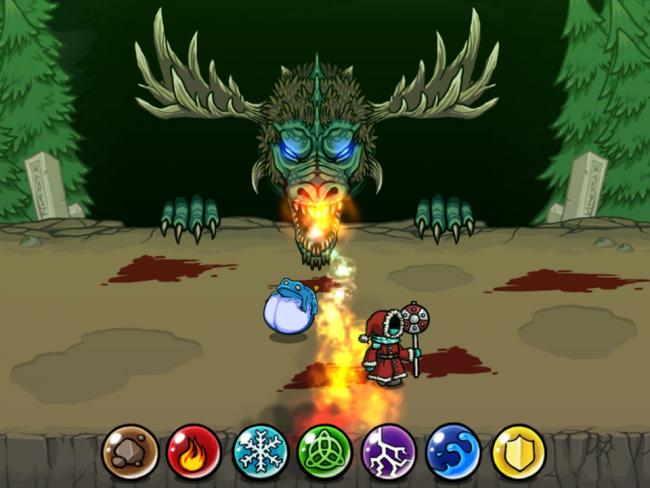 The entire adventure can be completed alone or with up to three co-op friends, where accidental team kills by fire not only runs rampant, but is also encouraged. The multiplayer is a huge draw to the title, and the interface works seamlessly in hooking you up with your fellow wizard cohorts. But if you’re short on robe-wearing friends, not to fear! Exclusive to single player mode, wizards going it alone can purchase one of nine funny “Familiars,” or animal sidekicks to help you on your journey, like the Gunfish or the Ballfrog. Also making a return in Wizards of the Square Tablet is the Magicka trademark of buying new robes, which both grant you stronger abilities and expose some of your weaknesses, so there’s a lot of strategy involved in picking what you wear. Even the different robe names showcase the game’s fantastic sense of humor, like the Contaminated Robe, the Testosterone Robe, and a little nod to Dead Space’s Isaac Clarke in the Spacious Robe.

Hands down, Magicka: Wizards of the Square Tablet is one of the best action-adventure games I’ve ever played on my iPad. The game just has everything you could ever want in a mobile sidescrolling game: beautiful visuals, great gameplay, and tons of diverse environments and enemies that never seem to get old. I know I’ll be hopping back online to the magical and hilarious world of Asgard later on this week, as soon as I get my wizard robes back from the cleaners.