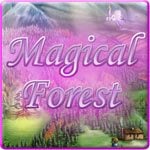 If you have any deadlines today, such as submitting a game review to your editor, don’t download Magical Forest. If you do, kiss the next few hours of your life goodbye. You should also grab two Popsicle sticks and some dental floss for when your finger goes numb from all the mouse clicking.

You might have seen us compare Magical Forest to a couple of other games, including Virtual Villagers and Grimm’s Hatchery. Magical Forest shares simple resource management with the former, and as in the latter, you’ll raise a variety of fantasy-themed creatures. In the end, though, Magical Forest is simpler than either of those offerings.

Your goal is to raise one million gold pieces to buy back the titular forest from the Chainmaw Logging Company, which is stripping the enchanted woodland of its timber. To do this, you’ll need to locate all of the extraordinary creatures that inhabit the forest, raise them and sell the resources they produce in exchange for the gold you need. (The dunderheads at the logging company don’t realize they’re sitting on a gold mine. Are the developers, 3 Blokes Studios, making a subtle statement about reaping the true value of our natural resources?)

You’ll start at the World Map, which is the screen where you’ll do the least amount of clicking. In fact, there are only three locations from which to choose: the Forest, the Shop and the cottage where you store your helper points and upgrade your helpers.

Most of the clicking takes place in the Forest, which is comprised of a single screen containing all of your creatures. As they go about their daily business, they get hungry, produce specific resources for you to gather and gain experience. You begin with cute little Grass Fuzzies and Honey Fuzzies, but before long, you’re tending to unicorns and three-headed dogs, among other outlandish creatures of legend.

When you’re not picking up the resources your creatures leave behind, you can smack the rats, bats, spiders and other assorted monsters that slip in from the edges of the screen; collect presents that contain goodies such as berries, gold and experience points; and gather helper points, which allow you to purchase and then upgrade three mechanical helpers. One helper automatically attacks enemies, another feeds the creatures and a third scoops up resources. And yes, you must click them from time to time in order to wind them up.

You progress through the many sections of the forest by unlocking new creatures. To discover a new creature, you must have a certain amount of gold in your coffers and collect a specific amount of different resources. To acquire more gold, you can sell the resources you’ve gathered.

The World Map also takes you to the Shop, where you can visit one of three characters. Merl is your standard wizard. In his corner, you can purchase weapons and spells for taking out monsters, healing spells for curing your creatures after they take damage or go without being fed, and the all-important berries. In corner number two, Jillian the Creature Merchant will sell you any of the creatures you’ve unlocked as well as purchase any you own. One of the quickest ways to earn gold in Magical Forest is to purchase creatures at their base price, upgrade them and then sell them to Jillian. She’s as generous as Merl is cheap. Then there’s Billy the Wise, who acts as a living, breathing help file.

Although the above is a lot to take in, everything becomes second nature after a few minutes of gameplay. Unlike Virtual Villagers, there are no puzzling quests to complete, and unlike Grimm’s Hatchery, you can’t crossbreed your creatures, so in comparison to those titles, the gameplay in Magical Forest is somewhat shallow. Once you get the hang of feeding, collecting and selling, the gameplay settles into a few hours of rote repetition. While this hurts the replayability of Magical Forest, the various upgrades come quickly, so there’s always something around the corner for which to push. This gives the game an addictive quality, without which it wouldn’t as fun to play.

Props must be given to the interface, which places everything you need within a few mouse clicks. As with the gameplay, the interface takes getting used to, but once you learn your way around, you’ll have no problem performing the various tasks for which you’re responsible. I never grew to like the creature upgrade screen, which forces you to scroll through your creatures one at a time instead of showing all of them on a single screen, but that was my only real niggle.

Plus, the visuals have enough charm to pass muster. While the creatures could’ve used a few more frames of animation, the forest environments are colorful and well drawn, and the Shop and the cottage where you store your help points all have the look and feel of an old school role-playing game.

Magical Forest is worth downloading and trying. I beat the game in just a few hours, though, and I have no intention of playing it again. But while I was making my one pass through Magical Forest, I was quite addicted. So the choice is yours. Just remember my caveat about deadlines.