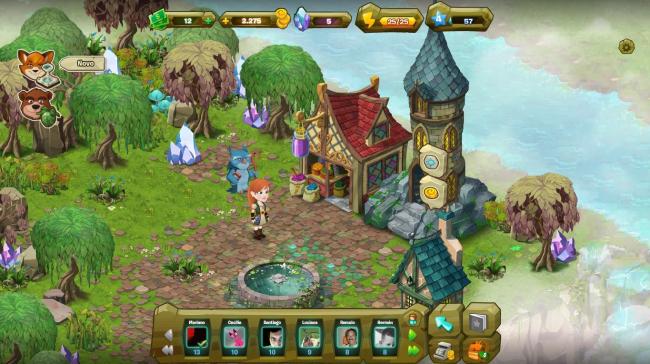 It may not break any new ground, but there’s enough magic in Magic Valley to make it worth your while

If most of us had a dollar for every time anthropomorphic animals asked us to use our magic powers to save their valley, well, we’d be broke. If you still want to know what it’s like, simply get on Facebook and explore Magic Valley, Vostu’s latest attempt to conjure something fresh out of some familiar ingredients.

As the new apprentice in town, you’ll quickly meet your magical mentor (after customizing the appearance of your avatar, that is), a somewhat sarcastic owl named Balthazar. He’ll take you through the basics of the Magic Valley, where your mystical talents can be used to make things better in various ways.

Mostly, your efforts will revolve around doing things you’ve probably done in previous Facebook games. Buildings can be constructed and harvested at regular intervals to earn coins and experience points. Various kinds of items need to be removed from the land – rubble, rocks, weeds and such – and clearing them away produces more XP and crafting materials. Crafting buildings combine those materials with magic crystals to make new items that can then be sold for more coins if desired.

In a development that should surprise no one, there’s an Energy resource that controls how many actions you can perform in one session, and it refills at the rate of a point every few minutes. One nice twist to all of these conventional mechanics is that graphical flourishes reinforce the magic theme. When you click to start work on a building, your avatar actually casts a spell that animates tools to do the work, kind of like “The Sorcerer’s Apprentice” minus the disastrous side effects. It’s a little thing, but it makes a difference.

The other aspect of Magic Valley that helps set it apart from the numerous games that play out in similar fashion is the way that quests help drive the story. Instead of simply giving you direction, the quests lay out lore almost like an RPG. The animal NPCs also have distinctive personalities, and they interact by making jokes, flirting with each other and more. 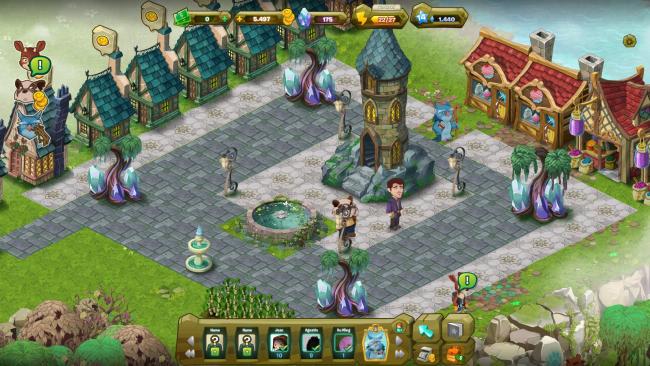 They also kind of, sort of have conversations with your avatar. Most of the time you’ll simply click on a dialogue balloon to have the NPC keep talking. But every so often (your mage doesn’t talk much, which makes it a good thing he or she doesn’t cast spells like Zatanna), you’ll get options on how to respond. Choices made in conversations don’t affect the quest but do change the next thing you’ll hear from the quest giver. It’s not exactly Mass Effect, but again, it’s good to see.

Friends can help you progress more quickly through the game, but at least early on, not having them doesn’t feel like too much of a detriment. One design decision that isn’t as welcome is the need for special runes to help dispel the fog that covers new areas to explore. The runes can only be harvested from Balthazar’s tower once every 24 hours, capping advancement even if you choose for longer than normal play sessions.

The look of Magic Valley is a fairly generic one that could easily be confused for other fantasy browser-based titles. Sound effects are a different story, with Vostu actually taking the time to put in bird chirps and other ambient noises that make the forest sound like a forest.

Ultimately, it’s going to be those small details and the strength of the story that either draw players in or lead them to dismiss it as something they’ve seen before. It could very well be that people are just tired of Facebook games in this vein, but there might be enough that’s different about the Magic Valley to help make it part of one last hurrah.