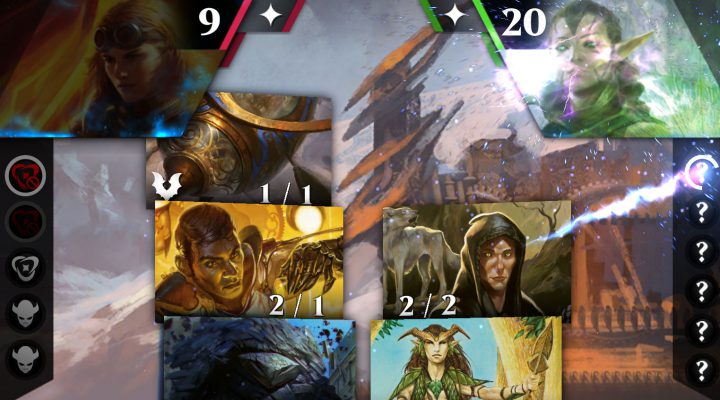 Streamlined in all the right places.

Plenty to keep you occupied between game modes and deckbuilding.

Menu system could be a little nicer and less glitchy.

Less of an emphasis on PvP than you might expect.

More than one creative type has told me that it can be easier and more rewarding to work within certain constraints than to begin a project with an entirely blank canvas. Magic: The Gathering – Puzzle Quest bears that out, managing the impressive feat of combining numerous elements from the most popular collectible card game of all time with a tried and true match-3 framework. It’s a slick marriage, one that’s only held back by some rough edges in other areas begging to be smoothed out.

Just like in anything else bearing the Magic name, Magic: The Gathering – Puzzle Quest (henceforth to be known as MTGPQ to avoid an even earlier onset of carpal tunnel syndrome) places the player in the mystical booties of a Planeswalker, a powerful spellcaster armed with an ever-increasing mastery of magic. In the card game, this knowledge manifests itself in duels with other players, but here you’ll need it for both single-player and head-to-head battles. 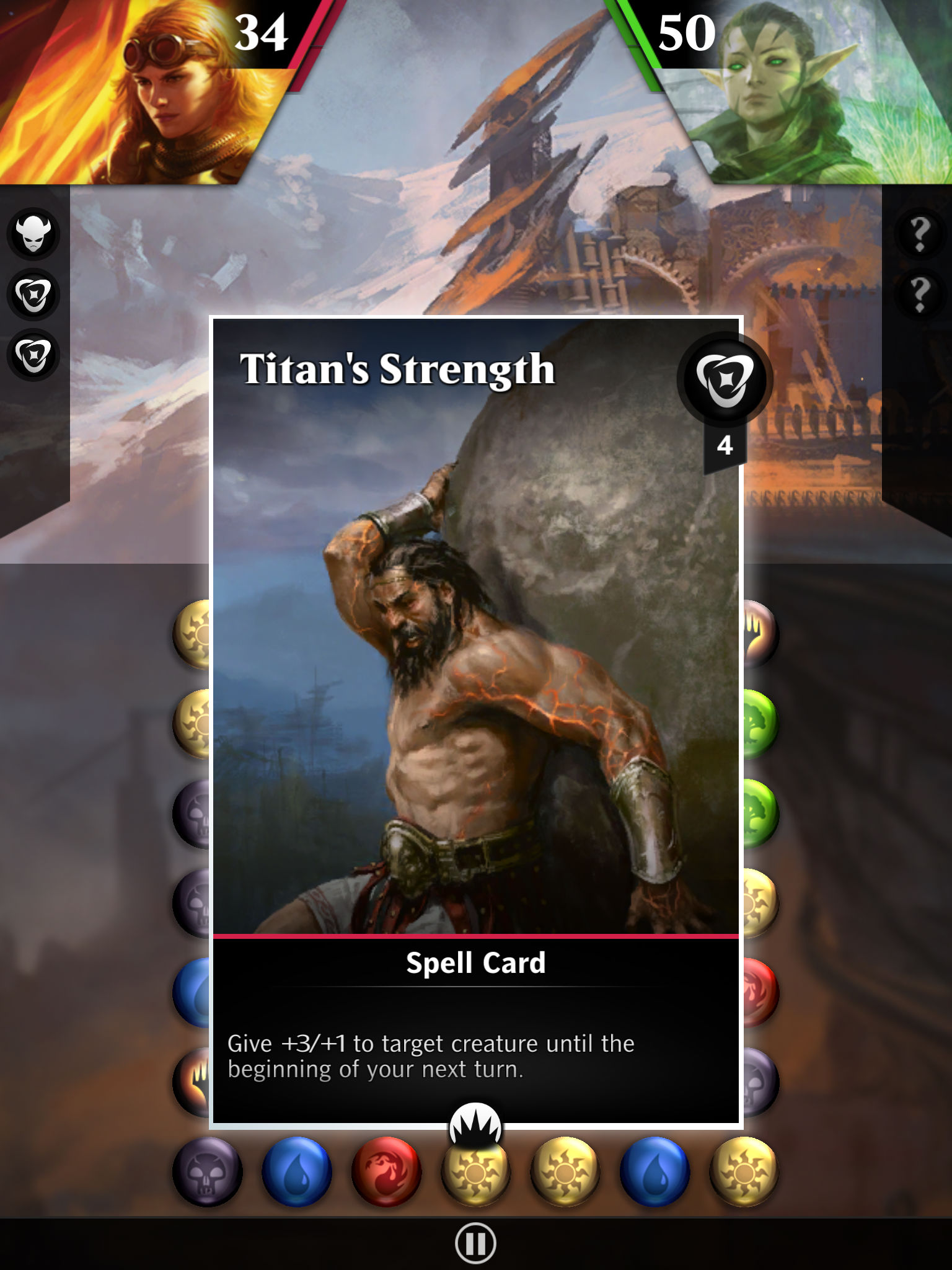 You’ll also need to know how to match three or more like symbols, though that’s something that almost anyone who owns a smartphone or tablet should understand by now. The big twist is that instead of lands to provide mana to power your cards, that energy comes from making matches on the playing field. The five classic Magic colors provide your symbols, as well as an extra one used to fuel the Planeswalkers’ special abilities.

Puzzle Quest veterans will feel right at home with the way those abilities come into play, as well as the way different Planeswalkers have affinities for specific colors. Still, the most important part of the gameplay is the deck of 10 cards you have at your disposal. One is drawn each turn into your hand, and from there, you can choose the order in which matches provide energy to play them. Creatures are the first type you’ll learn to use, both to attack the opposing Planeswalker and to protect yourself, but a good mix of spells and support cards and a feel for when to play them is also important.

Some of the design decisions made by the team at Hibernum Creations feel immediately like winners. Smaller card decks ensure that duels wrap up in a few minutes. Smaller details like a summoned creature identical to one already on the playing field simply combining its stats with the first one to avoid clutter are also wise. The currency system works well, with premium currency able to be earned through gameplay as well as purchased.

There’s plenty of real Magic: The Gathering lore sprinkled throughout, though you’re free to ignore it and just enjoy the gameplay if you wish. The fun of opening packs of cards in search of new, more powerful additions to your deck is in full effect, and the promise of events down the road in addition to the story mode and PvP battles means there should always be plenty to do.

Yet portions of MTGPQ are simply more frustrating than they should be. The dueling interface is clunky, with your hand hidden on a slide-out tab that has to be pulled out and put away every time you want to play a different card than the one already queued up. Dragging cards into the desired order is cumbersome too. 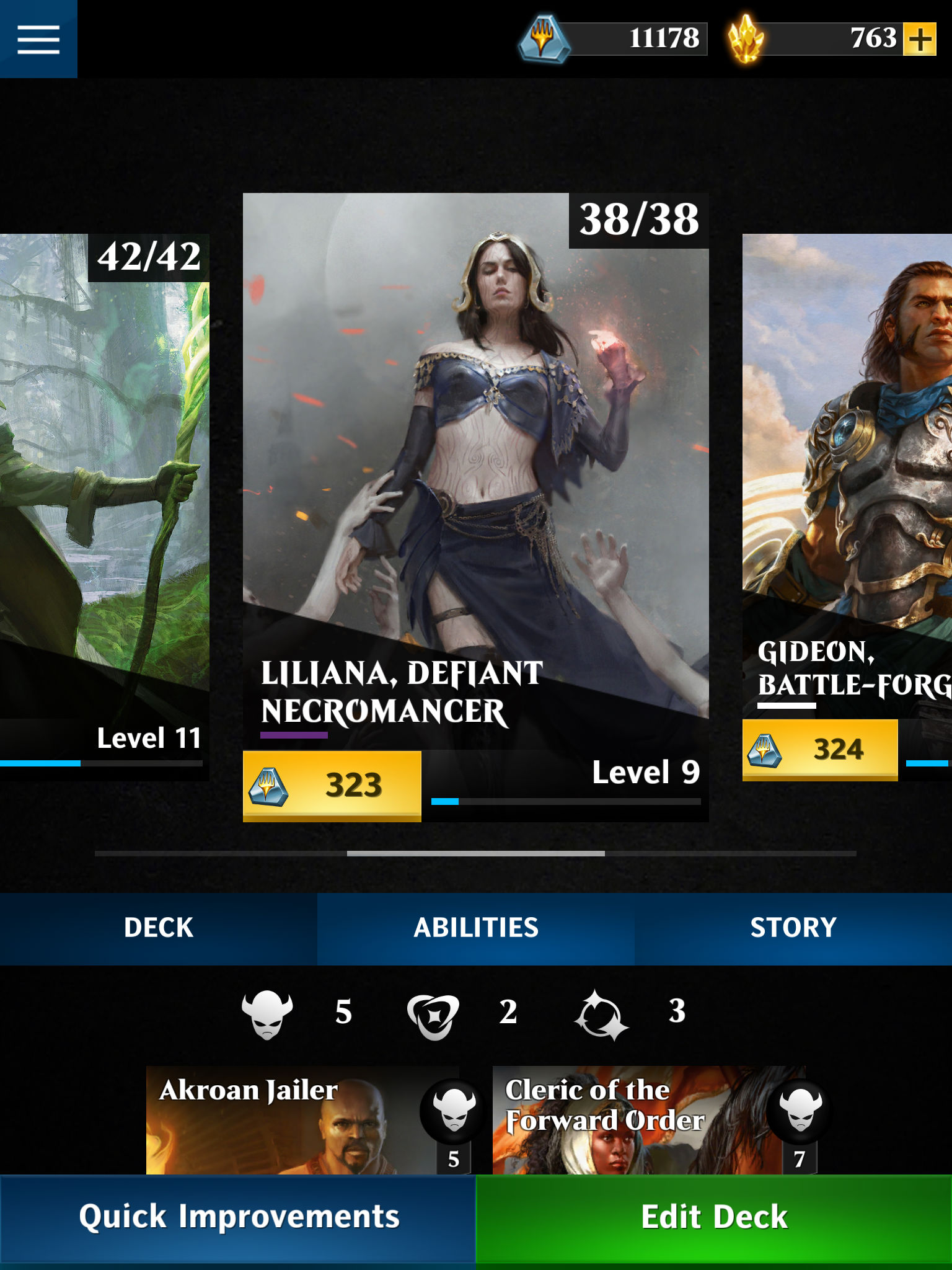 The game’s menu system isn’t intuitive, and you’ll spend more time than you’d like switching between options or figuring out how to jump back to a previous screen. I experienced some glitches too, like the game preventing me from leveling up one of my Planeswalkers even though I had plenty of currency with which to do so. Most of all, with head-to-head battles at the very heart of Magic: The Gathering, it feels like a missed opportunity not to have them front and center in this game. Right now there are duels you can enter with random opponents, and while there is a ranking system employed, it’s not nearly as prominent as you’d expect (and also uses its own energy system where you have to “heal” between battles, which is a whole different can of worms).

Taken together, it’s not enough to scuttle all the ingenuity in the game design, but it does make me feel that for the time being, I’ll be playing Magic: The Gathering – Puzzle Quest less than I’d hope. It’s definitely fun and a different take on both match-3 and Magic, but it’s going to need some updating wizardry to completely captivate me for the long term.