Home / Reviews / Magic: The Gathering – Duels of the Planeswalkers 2013 Review 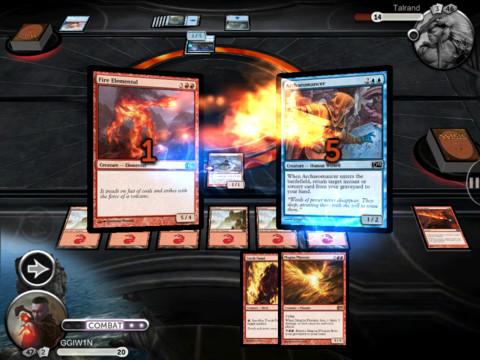 On the off chance you’re not familiar with Magic: The Gathering, we’re talking about the granddaddy of all trading card games here. It’s been around for nearly 20 years in its print form, has millions of players, and is played competitively as much as it is for fun. This sort of thing doesn’t happen by accident. In case these numbers didn’t make it clear, let me spell it out for you – Magic: The Gathering is good stuff.

In the digital arena, there seems to be two schools of play available for fans of the card game. Magic Online lets players engage in the game exactly has they would in the real world – that means trading cards, tournaments, and more – but it’s definitely geared towards the veteran Magic player. By contrast, the Duels of the Planeswalkers series is designed with accessibility and new user friendliness in mind (while still offering plenty for existing Magic fans to enjoy). So as you’ve probably guessed from the name, Magic: The Gathering – Duels of the Planeswalkers 2013 falls firmly in this latter camp.

For the uninitiated, the basics in Magic are fairly simple to grasp. Players will draw cards revealing creatures, magic, equipment, and lands. Lands are what provide the mana you’ll need to cast the rest of your cards, and players will take turns spending that mana to call new cards on to the battlefield in an attempt to reduce their opponent’s life to zero. That said, there’s actually quite a bit going on in Magic to make these basics happen, and mastering the varying elements is essential to playing well. Fortunately, the game offers a pretty comprehensive tutorial to play through, as well as a variety of reminders and hints that you can turn on and off at any time.

As with Magic 2012, every battle you win in the single player game will unlock a new card for the deck you’re using. And with 10 decks, each with 30 unlockable cards, that’s a lot of time you’ll be able to invest in the single player before the carrot disappears from the end of the stick. And since those unlocked cards will carry over to the multiplayer – which is where many players feel the real meat and potatoes of the game resides – Magic 2013 is a game that may very well keep you playing until Magic 2014 hits digital shelves the same time next year.

The biggest change from 2012 is the inclusion of Planechase multiplayer (both against the AI and against real players). Whereas Magic has traditionally been seen as a two-player affair, Planechase emphasizes the idea of group multiplayer. Supporting up to 4 players, the game is focused around “plane cards” that act like an event of sorts. Each plane card will modify the game’s rules in a certain way, and drawing a new one (or “walking to another plane,” as the lingo goes) will change the rules yet again. For those who’ve learned the basics, it offers up a neat new kind of challenge that doesn’t require much more than a basic understanding of the game.

The other big change, of course, is that the series has finally decided to planeswalk on over to the iPad. There have been plenty of great card games on the device over the last few years (most notable the Kyle Poole developed Shadow Era), but in the end, they all left us asking “why isn’t Magic on a touch screen yet?” The folks at Wizards of the Coast heard us loud and clear, and after having spent some time with both the PC and iPad versions, we’re pleased to say that the iPad version is every bit as good as its PC counterpart. Depending on your PC specs, it may be even better. The Retina display on the third generation iPad makes the art on these cards pop – and we’re talking art that was already exquisite to begin with.

Magic 2013 also introduces a really neat player stats screen that lets players know about how often they’re using different colors of mana, leaderboard positions, “most” numbers like damage done or creatures in play, and more. Other little tweaks, like reading a fact sheet about opposing Planeswalkers before a battle in single player, are nice touches as well. Little enhancements like this make 2013 much more evolution than revolution, but in the end, all the changes here are good stuff.

That said, some of the little nuances that bugged us in 2012 are still present in 2013. When playing single player, for example, there’s no way to speed the game up. A timer ticks down to give players the time they need to think, card animations take place, etc… It’s all well and good, but once you’re in the groove, sometimes you just want to click a “next” button that isn’t there. This turns a match that could conceivably be over in 5 minutes into one that lasts 10 or 15. 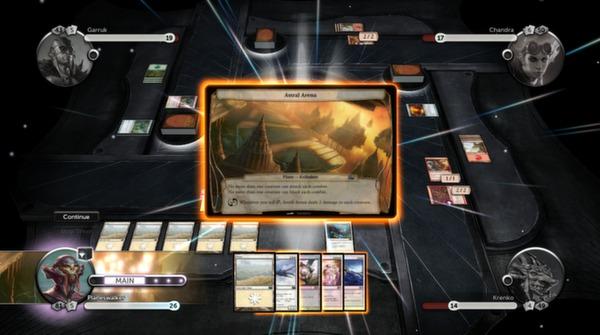 It’s also a little frustrating that your progress doesn’t carry over from the PC to the iPad or vice versa. If I’m unlocking decks on one, I’d love to be able to use them on the other. Likewise, it would be great to see win/loss records synced up, and even let iPad gamers compete against those on the PC. Nowadays these features are becoming increasingly common, which makes their absence start to stand out a bit here. But alas, PC users will use Steam, iPad users will use Game Center, and never the two shall meet.

Despite a few new additions and the appearance of an iPad version, Magic 2013 doesn’t vary much from the game that was presented in Magic 2012. Having said that, Magic 2012 is pretty much the gold standard for digital trading card games, so this lack of change isn’t necessarily a bad thing. And since the changes ended up all for the better, in the end, Magic 2013 really does end up feeling like an improvement over last year’s release.

If you didn’t pick up Magic 2012, Magic 2013 is something of a no-brainer. And if you did, well… I suppose it still something of a no brainer. After all – this is the Madden of card games. If you want to jump into some online card battles (and we know you do), you’re going to want to have all the latest cards and other assorted goodies that annual iterations bring.

[While multiple versions of this game are available, our review was based primarily on the PC version]