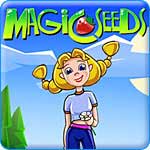 Cross pumpkin seeds with cabbage and what do you get? Not lettuce of any kind nor anything from the squash family. In Magic Seeds, mixing these two produces sausage. How about mixing lemon with watermelon? Corn with tomatoes? These product that most dreaded and loved food: The fully-loaded carb food, bread.

Unlike Alice Greenfingers, there’s no battling between equipment or digging involved. Click a flower bed and Jane, who resembles a blonde Pippi Longstocking, plants, cultivates, or picks up the plant. Dig, weed, repeat. Dig, weed, repeat. Occasionally, take a break from the monotony and make a trip to the store to sell the goods for some moolah, buy gardening supplies, or build Jane’s house.

With only eight plants to use in creating ten products, breeding the plants is far less complicated in Magic Seeds than in Plant Tycoon. The first goal of the game is to complete the plants crossing chart so you know which two plants create what offspring. The ultimate goal is to build Jane’s house. The first level of the house costs $1,000. The next level price climbs and continues to climb with every added-on level until by the halfway point of the house building, the price has climbed to almost $10,000.

Raising money isn’t easy considering the need to buy seeds, scarecrows for shooing the crows, adding flower beds, upgrading equipment, including Jane’s shoes so she moves faster. The first hour of the game went by slower than a snail crawling across a garden. It was dull, but sometimes games surprise and this one eventually picked up speed after buying upgrades and building some of the house. However, after three straight days (seriously) of playing the game, the house was only halfway finished and there was nothing left to discover.

As if gardening isn’t challenging enough, Jane battles two pests: Mice and crows. Scaring the mice only takes a walk by since they’re scared of folks. Fighting crows takes more power… firepower. You can shoot ’em (by aiming and clicking with the mouse) or shell out the bucks to buy scarecrows. Even with scarecrows, you still have to shoot crows – just not as many.

Clicking ahead works most of the time. Sometimes Jane takes the wrong action or a click disappears on its own. She picks up a box of plants and you have no idea what plant is in the box. It would help to know what plant Jane carries without putting it into an empty bed to find out.

Fertilizer is available for speeding plant growth. When adding fertilizer, a line appears below the flower bed to show how much fertilizer it has. The line starts as green, turns yellow and then turns red. Red does NOT mean too much fertilizer, which is confusing and not clarified by the game’s instructions. This is also a problem in the shop. While some of the items come with an explanation, it isn’t enough.

One of the game’s biggest issues is its overall slowness, not in the movements but rather in making progress. Applying different strategies doesn’t make a dent in the game – it still takes a long time to add another level on the house. You could have many – if not all – upgrades and still play for hours without much progress. By this point, you wish the gun would work on the mice as they’re becoming a pain in tearing up the garden and it gets old to continuously click on the mice to prevent them from eating half the plants. Magic Seeds could stand a few magic tricks or power-ups to keep the mice away for a while.

Though there’s little dialog in Magic Seeds, the dialog shows you how to play the game. The grammar is bad in explaining Normal and Arcade game modes. “Arcade mode is different to Normal mode and has it’s personal rules.” Helpful! (In Arcade mode, players fulfill the store’s supply requests.)

Music. What music? The options include a volume control for music and another for sound effects. It’s ok to have a game without music, but why provide it as an option if there isn’t any? The game mainly consists of bird sounds and the shooting noises when the crows appear. Though guns are dangerous, you can’t help but smile when you shoot the crows. Animal lovers, the crows aren’t harmed – they fly away when shot at.

The game’s strengths come in the plant of the day and the fact that two products can only come to be by making crosses. Each day highlights two plants of the day, and the price for these plants climbs. A $20 tomato retails for $120 as a plant of the day, but you can’t buy tomato seeds – hence, the high cost. Since sausage and bread plants don’t have seeds, they’re always worth more. These features provide strategic opportunities for players who like thinking games. One caveat: there’s no way to know how long a day lasts.

The report that appears at the end of the day indicates the number of plant crosses open (indicating how many crosses you know about), number of plants open (this never makes sense), trophies earned, and plants sold. Most of the trophies come in when you’ve sold 100 of each plant. A few trophies have nothing to do with how many plants sold. Once you’ve earned those first few, you won’t earn any for a long, long time until you’ve finally sold your 100th plant

The game play in Magic Seeds isn’t, well… magical, but it’s a clever game that has potential with more cultivating.