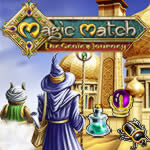 “If it ain’t broke, don’t fix it” is a pretty good mantra to follow when making sequels to well-received games. Tamper too much with a proven formula and a game will lose the distinctive qualities and charm that made it a hit in the first place.

Although in the case of Magic Match: The Genie’s Journey, the saying could be more along the lines of “if it is broke, don’t fix it.” The incredibly bad songs and annoyingly shrill creature known as Giggles the Imp were two of the things that gave the original Magic Match the quirky kick it needed to rise above the glut of tile-matching games out there, and I’m happy to report that both are still around in the sequel.

The songs that are “awarded” to the player after completing each section of the map to advance the story still feature dysfunctional rhyming schemes that are sung in the same cheesy, overwrought vocal style by a singer who sounds like he’s auditioning for the lead in Phantom of the Opera. And as for Giggles? Well, let’s just say that he actually talks now instead of just making grunting noises. You’ll quickly come to love/hate the distinctive “ooh-OUCH!” he exclaims every time you’re about to run out of time.

The story picks up where the first one left off. Giggles has been transformed into a genie by the evil Djinn, and so he and Merlin the wizard journey to the Arabian Nights-themed land of Arcania to find a way to turn Giggles back into his old Ewok-meets-Gizmo-shaped self.

Story-wise, the Arabian Nights theme is a bit forced. (Merlin in the desert?) However, the theme does give the game a distinctive new look and introduces a neat new set of symbols to match including scarabs, snakes, pyramids, magic carpets, potions and jewels.

These symbols, arranged on a diamond-shaped grid, represent the spell components that Merlin uses to perform his magic. The goal in each level is to collect a certain number of each type of spell component before time runs out by dragging the mouse across three or more of the same symbol. (The symbols don’t have to be in a straight line, but they do have to be touching in some way.)

Gameplay is very similar to the first Magic Match, but one notable difference is that there’s now a peacock on the screen that indicates how many possible moves the player has left by fluffing its tail out wider (many moves) or retracting it (little or no moves left).

The Djinn throws a slew of challenges at Merlin in the form of magical obstacles that appear on the puzzle board. Among the more interesting ones are wooden shields and rocks that block access to tiles, ice that freezes components in place, tornados that rampage around the board knocking off random tiles (which can sometimes work to the player’s favor), and phantom magic that transforms components into different ones.

Players are awarded magic points that are used to cast various spells to get out of sticky situations (like when there are no more possible moves on the board). There are spells that transform a cluster of symbols into a specific component, swap two components on the board, and shuffle all the components around.

The main mode offers 50 levels, and there’s also a Relaxed variation where you can complete matches at your leisure without having to stress out about time running down. The ending is pretty anti-climactic, unfortunately, and although you can choose to replay the story mode a second time there doesn’t seem to be any gameplay-driven reason to do so, unlike the first Magic Match where play was different the second time around.

In the third mode on offer, you can duel against Giggles for extra magic points in a turn-based game of strategy where the goal is to collect all the required spell components before he does.

Overall, Magic Match: The Genie’s Journey is a respectable sequel. It’s a shorter game length-wise, but the production values are actually a little better this time around. The menu music still sounds like what you’d encounter at a cheap holiday resort, but the in-game music is actually quite good, and there are some sweet-looking trophies to be collected in the trophy room for achieving various game milestones. And, most importantly, the developers have managed to preserve the quirkiness of the original.