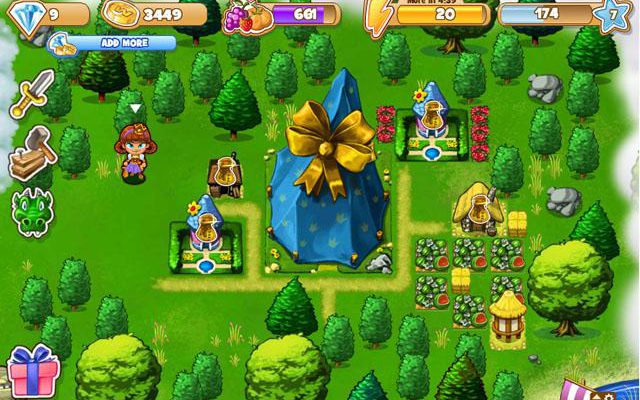 It’s always interesting when Wooga decides to create its own take on some dominant Facebook genre, because the resulting game inevitably fails to feel like a clone. Wooga’s not good at making boring games and tries to liven up whatever formula it tackles with fresh ideas. In the case of Magic Land, you have a game that probably began life as a simple FrontierVille clone before picking up elements of CityVille, Digital Chocolate’s various city-building games, and classic single-player RPGs.

So Magic Land is a game where you simultaneously run farms, erect new buildings, boost income with decorations, and fight monsters like ogres and dragons. There’s even an exploration aspect to it, as you can uncover shrouded areas of land by burning fog away with a torch. While there’s very little in Magic Land that doesn’t have some sort of precedent in another social game, the way Magic Land blends different game mechanics together results in something that feels fresh, if not completely original. 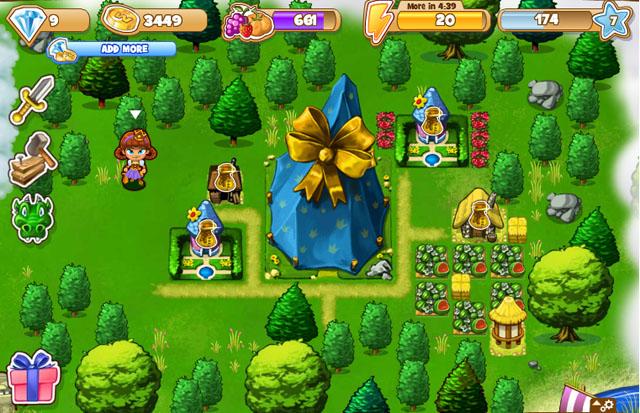 Magic Land begins with you selecting a hero or heroine and then, in classic video game style, a dragon running off with the prince and princess. Your job in Magic Land is to help the kingdom recover from the dragon’s devastation by rebuilding, while also going on quests that in time will let you discover the dragon and recover the missing royals. In practice, this means Magic Land is a peculiar city-builder where you divide your time between constructing a medieval castle town, growing food, and slaying trolls who roam about the forest.

Not enough good can be said about Magic Land‘s visuals. The game uses the highly-detailed 2D animations typical of Wooga games like Diamond Dash or Bubble Island, but on a truly massive scale. The dragon, the trolls, and your hero or heroine’s movements are all immensely detailed. Buildings in Magic Land aren’t animated, but this is forgivable when so much of the adventuring portion of the game features big, noteworthy sprites. Magic Land doesn’t take an especially long time to load, but the complex animations do seem to give it more problems with leaking memory than is typical of a Wooga game. 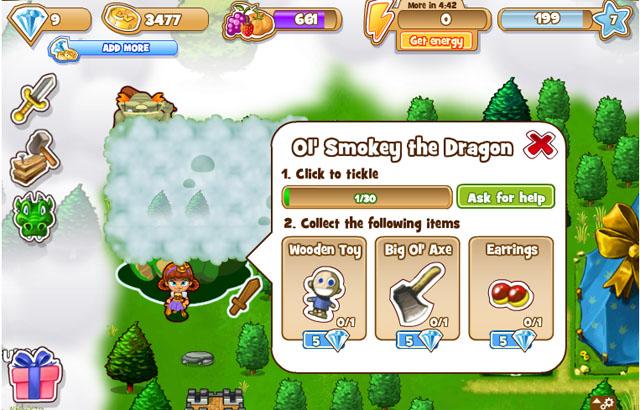 Fans of virtually all of the big Facebook sim genres are going to find a lot to enjoy in Magic Land, which takes proven gameplay concepts and combines them in an interesting way. There’s nothing radically new in the game, which may make picking it up unappealing to players who are already deeply invested in older games like CityVille, FrontierVille, or Millionaire City. Still, if you just want to play something that’s new and beautifully animated, then you can’t go wrong with Magic Land. There are plenty of medieval-themed fantasy games on Facebook, but none that feel quite like this.