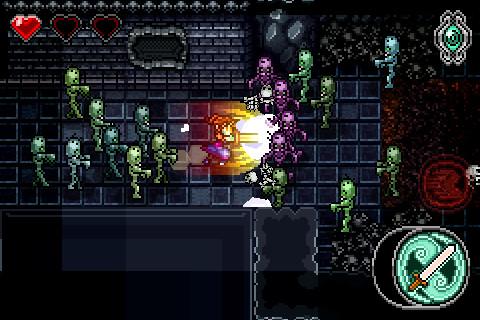 Mage Gauntlet puts the action back into action-RPG

Action RPG’s have proven themselves pretty popular on the iPhone. Whether we’re talking old school classics like Secret of Mana or new franchises like Zenonia and Chronicles of Inotia, the top-down, story-driven action genre that was so popular in the 16-bit days has been given a second life on portable devices. Mage Gauntlet is the latest title to recapture that retro glory, and like previous releases from RocketCat Games, it doesn’t disappoint.

Mage Gauntlet tells the tale of Lexi, a young girl in a world of magic who seems to be… well, allergic to anything magical. Anytime she tries to practice magic, everything mystical ends up exploding. She’s not too happy about this, so she sets out on a quest to find a solution. This leads her to the wizard Whitebeard and his Mage Gauntlet, a glove which Lexi can use to perform spells without suffering any of the ill effects she normally does from magic. It’s not a permanent solution though, and if Lexi can help Whitebeard on his quest, then maybe they can work together to fix her magic allergy for good.

It’s a simple premise, but like all RocketCat experiences, it’s told with a great sense of humor and oodles of charm. What sets Mage Gauntlet apart from the legions of other action RPG’s though isn’t the story, it’s the gameplay.

Clearly designed from the ground up for mobile play, the emphasis here is on shedding off all of the complexity of the action RPG formula to present an experience that’s easy to jump into without having to worry about the fiddly bits. There are no fetch quests to keep track off, weapons and armor are kept largely uncomplicated – it’s all streamlined to focus explicitly on the action.

The structure of the levels, too, seems to have the mobile gamer in mind. Rather than exploring a large open world, each “dungeon,” for lack of a better term, is divided into four levels. Once you put the game down, you can revisit any section and jump back in to whichever level you wish to continue your adventure.

The combat system is also simple, though not in a detrimental way. Players will be able to swing their weapon by tapping on the weapon button, and if they have enough energy stored up they can hold down and release a more powerful attack. Likewise, energy can be spent on dashing if you need to move out of the way of an enemy quickly. That’s going to happen from time to time, as the variety of enemies – all with unique behaviours – is simply stupendous.

Players will also be able to use their gauntlet to cast a spell. To do so, they’ll bring up a menu that pauses the gameplay and lets them select from one of four spells that they’ve stumbled across during the course of play. The spells are only usable one time though, so once cast you’ll need to find another spell to take its place. Spells, like enemies, come in a pretty wide variety – and they’re downright essential once you reach the boss battle at the end of each section. 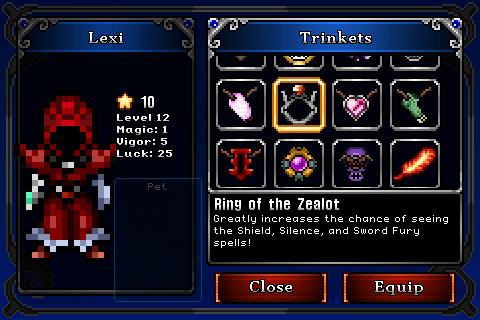 For all Mage Gauntlet has going for it though, we were a little let down by the equipment options. I can appreciate the sentiment behind keeping it simple, but rather than equipping different sets of armor with completely unique stats, each set will simply offer a specific bonus. “Provides a 55% spell crit bonus to the Beam of Light spell,” or “Greatly increases the chance of seeing the Shield, Silence, and Sword Fury spells,” That sort of thing. Don’t get me wrong, the bonuses are nice – it’s just that they didn’t feel like they made nearly as significant an impact on the game as they could have.

And for hardcore RPG enthusiasts, this package is a little lighter than they might be hoping for. Sure there’s plenty of content, but in stripping down genre staples to focus on the action, Mage Gauntlet has sacrificed much if the depth that many action RPG gamers crave.

Small quibbles aside, Mage Gauntlet proves itself to be a charming, action-packed, ultra-addictive title that should satisfy any 16-bit gamer. With 42 levels to complete, and then a Master Mode after that, this is a game that will keep you busy for quite some time. Luckily, thanks to some smart design choices, you’re never more than a tap away from the action.