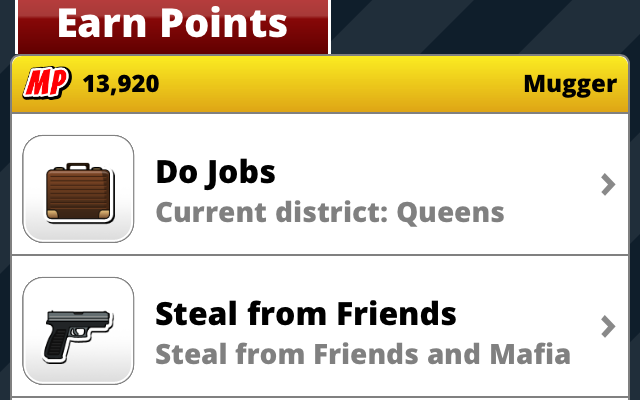 Mafia Wars Shakedown sticks with the formula of the original Mafia Wars, but polishes it up real nice

When Mafia Wars 2 hit Facebook last month, it was heralded as a tremendous step forward for the franchise. Zynga’s first true sequel was light years ahead of its predecessor, replacing the text-driven RPG format of yesteryear with a slick, stylish 3D world to explore and a whole new style of gameplay. Mafia Wars Shakedown, however, fails to reflect any of this progress.

A new mobile-exclusive entry into the franchise, Mafia Wars Shakedown feels an awful lot like the original Mafia Wars, but with a fresh coat of paint. Players will attempt to climb their way through the ranks of the mob by visiting different areas and doing different jobs to earn experience and money. 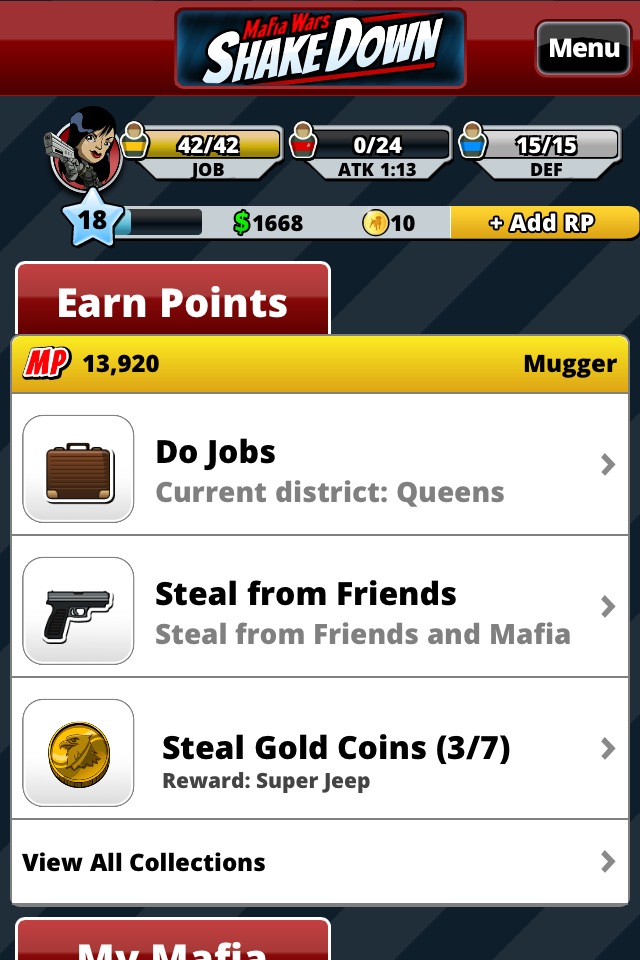 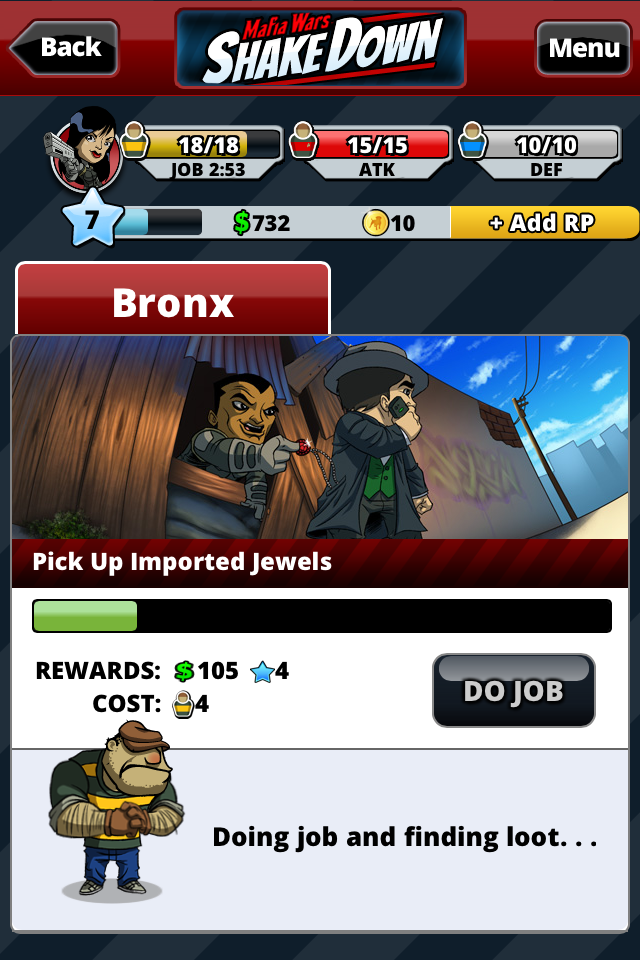 Like most text-based social RPG’s of this nature, doing jobs amounts to nothing more than clicking a “do job” button after you’ve selected the task you want to accomplish. Complete all of the jobs in a certain area enough times and you’ll get to square off against a boss who, once defeated, will allow you to move on to another city where the cycle will repeat itself.

As you level up or master a certain job, you’ll earn new “goons” that you can assign to an attack, defense, or jobs slot. While this is nothing more than a colourful way to say “buy another energy point for attack/defense/jobs,” it’s this sort of color that takes Mafia Wars Shakedown from utterly generic to surprisingly endearing.

Indeed, the presentation here above and beyond anything you’d normally see in a text-based RPG – especially on mobile. The game has a cutesy, tough guy bobblehead look to it, with fantastic art depicting the different jobs and characters you’ll interact with. The soundtrack, too, offers a high energy caper-ish vibe that really sucks you into their charming little world of crime.

We were also pleased with the game’s slightly unique twist on player vs player combat. Rather than simply attacking for money or experience, players are working towards building certain collections of items that will unlock special new equipment for them. The only way to get these items is to stumble across them by chance while doing a job, or to attack an opposing player and try to steal their prized loot. You can set up bombs to defend the special items in your stash, too, so an opposing player who hits you with the full force of his mob may just end up with a face full of kaboom. 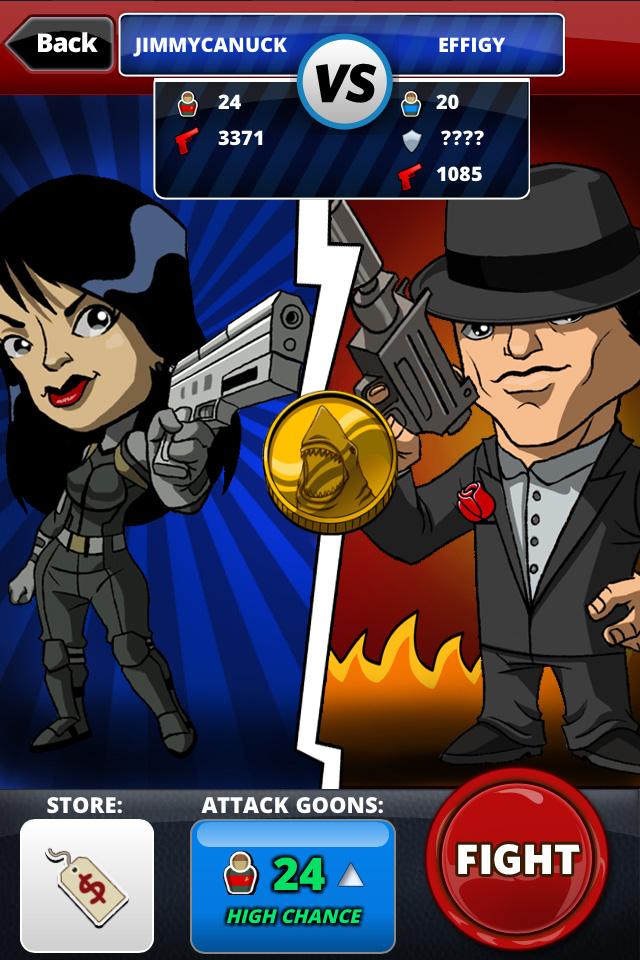 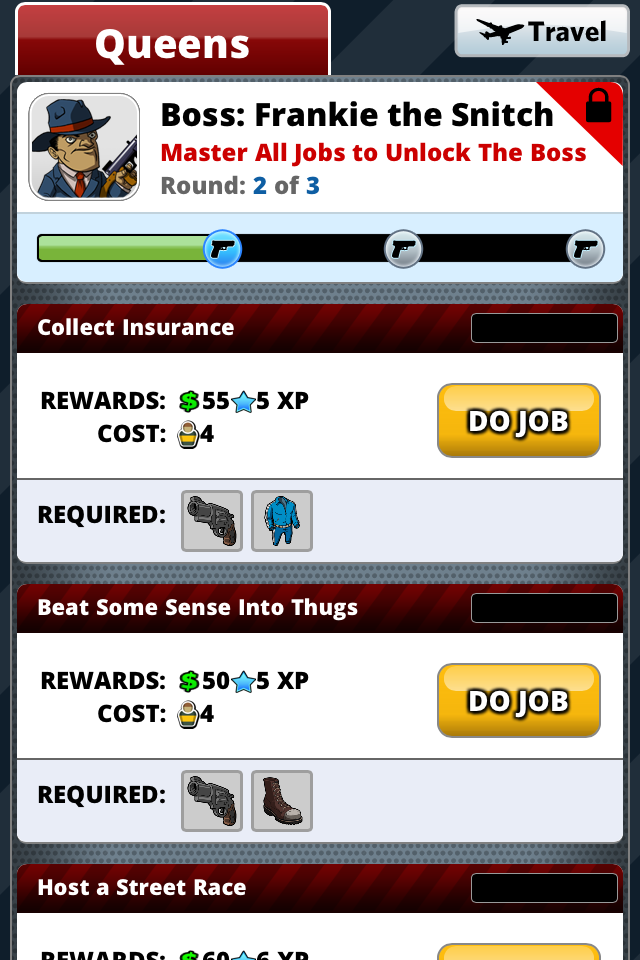 And while collections that reward players once completed aren’t really unique – it seems that every game since FrontierVille has implemented this mechanic in one way or another – seeing them used as a way to entice player interaction is a nice touch. Players are also incentivized to make friends and build up their mafia too, as the more people in your clan, the better a chance you’ll have at defeating bosses.

Even with the great presentation and nice twist on combat, though, the gameplay just doesn’t feel as inspired as it should – especially for a spin-off that exists in the shadow of Mafia Wars 2. At its core, Shakedown offers very little that you haven’t seen before. If you’re a fan of the original Mafia Wars and want to carry a taste of that in your pocket, or simply like text-drive social RPG’s and want to check out one of the better mobile games in the genre, Mafia Wars Shakedown is the answer to your prayers. But if you were hoping to see a game that’s as fresh and unique as Mafia Wars 2? You’re better off keeping to Facebook.