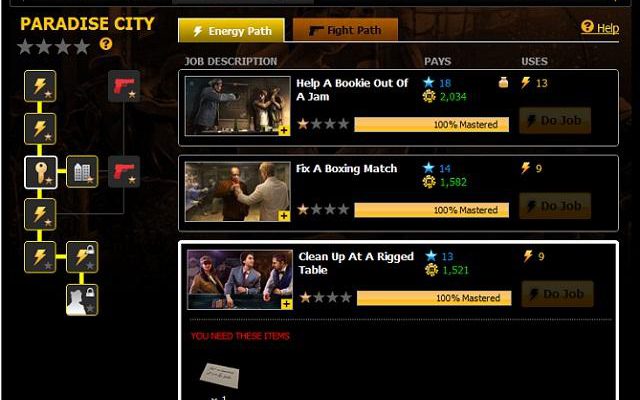 Mafia Wars adds its biggest and most visually pleasing expansion yet, featuring a promising overhaul of Jobs.

Zynga has been quietly closing a lot of games of Mafia Wars‘s vintage lately, with both Street Racing and Roller Coaster Kingdom gone in the span of the past few months. Mafia Wars might have become a relic of an earlier era in social gaming in the hands of a lesser developer, but Zynga has steadfastly refused to abandon Mafia Wars and its 24.1 million active users, 8.7 million of whom are playing every day. Instead, Mafia Wars has seen a series of updates and upgrades roll out in the past year that try to bring this old text RPG into the era of more interactive, graphically rich games like FarmVille. Mafia Wars: Las Vegas is possibly Zynga’s greatest success to date.

Las Vegas adds some much-needed visual dazzle to Mafia Wars and some interesting new features. Unlike other areas of the game, Vegas requires no particular experience level to unlock. The experience is broken into “districts” that work a bit like the chapters in the Moscow expansion, but more sophisticated. Each district has a “Job map” that you can choose to navigate toward the boss in any way you please. Most maps have an “Energy Path” that let you reach the boss by doing jobs and a “Fight Path” that let you use a blend of energy and stamina. The Fight Path option means that players who prefer to build themselves for a lot of PvP, robbery, and gang warring can get through Vegas a lot easier than other areas, even the latter stages of New York. 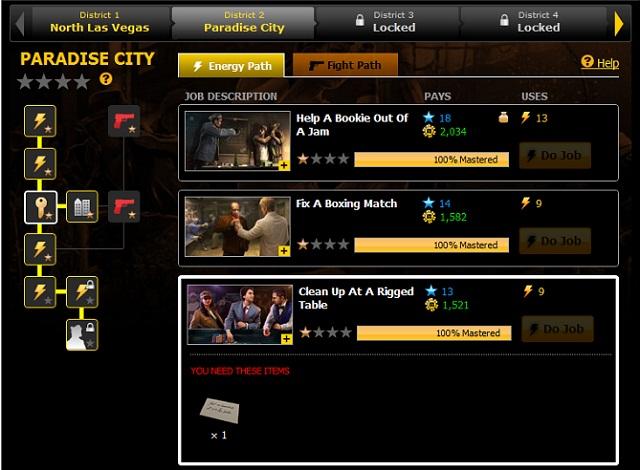 As with other Mafia Wars expansions, Las Vegas introduces its own currency (chips), its own properties (a casino you build up piece-by-piece and upgrade the way you upgrade buildings like the Chop Shop in New York), and a few new game features. You can opt to play a slots game in Vegas that lets you gamble the game’s cash-based currency, Reward Points, with roughly the same chances of good returns as real-life gambling. If you upgrade your casino far enough, you’ll finally gain the ability to exchange the gobs of New York cash you have lying around for Vegas chips. For players who like PvP, there’s a new Fight Club Tournament feature. The Tournaments separate users into “weight classes” based on the size of their mafia and then let them try to make some quick chips by betting on the outcome of the fights. You can also earn rewards for winning increasingly difficult brackets in your weight class. Just as the new version of robbery improved the game immensely for PvP players, Tournaments may well become the main attraction of the game for some players.

There are only two real problems with the Vegas expansion, one minor and one something Zynga needs to keep an eye on. The minor problem is the basic silliness of the chips currency. It makes sense that you use pesos in Cuba and rubles in Moscow, but it makes no sense at all that you can’t spend New York currency in Las Vegas until you’ve upgraded your casino far enough that you can convert currency. It’s clear that Vegas has its own currency purely to slow down veteran players who have banked billions or even trillions in New York over the years. 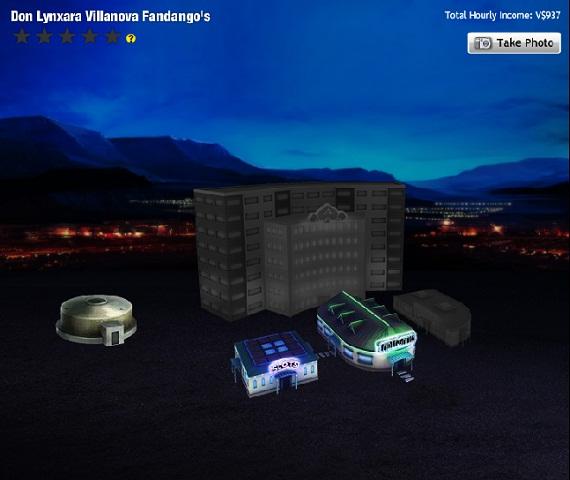 The other problem has to do with load times. Text RPGs like Mafia Wars initially took off, circa 2007 or so, because they weren’t bandwidth intensive. They loaded quickly and kept users clicking away at buttons as they managed their stats. The current version of Mafia Wars is one of the most attractive major text RPGs left, but it takes a surprisingly long time to load. Accepting gifts from friends through the Facebook notification interface can be agonizing, because the entire game has to load when you accept certain things (like energy packs). During the test period for Vegas, there were times when graphic-intensive parts of the game simply would not load. This problem occurred most frequently when the My Casino interface, but did crop up a few times with Jobs. 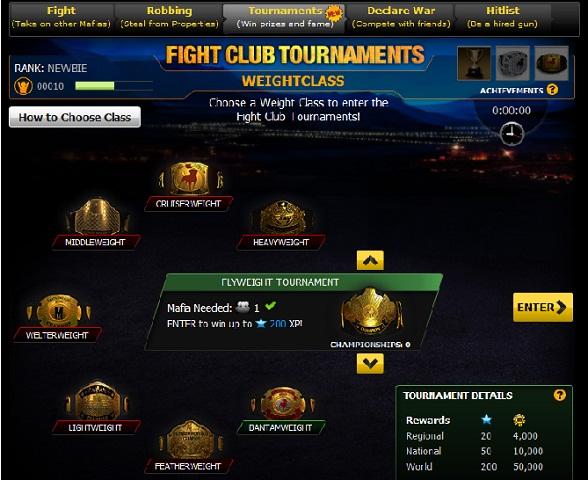 This is a minor issue and might just be due to opening weekend server load, but Zynga should be careful with how it beautifies Mafia Wars. A text RPG with load times is a bit ludicrous just on the face of it, even if that text RPG is actually running in graphics-rich Flash these days. So long as Zynga can keep adding content like Las Vegas to Mafia Wars, though, there’s little danger of it dying out in the FarmVille era.

Facebook’s most popular mafia RPG has gotten a much-needed overhaul.

Mafia Wars was one of Zynga’s first big hits, but it was looking long in the tooth during its last review. Between then and now the game has received an astonishingly complete overhaul that changes numerous game mechanics, introduces new features, and overhauls the game’s user interface into something much more visually appealing. 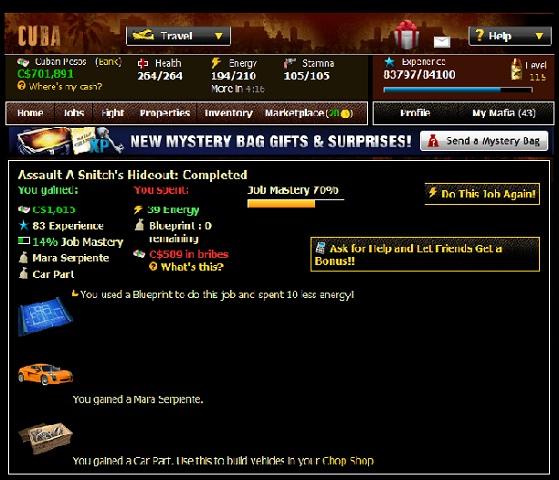 Probably the most substantial change, in terms of feel, comes from the introduction of a gift item called the Mystery Bag. Where the Mafia Wars gifts a few months ago were interchangeably worthless trinkets, Mystery Bags offer players that open them a chance to obtain rare items, Reward Points, “imaginary friends” to join your mafia, and a lot more. Enough big-ticket items are now offered through Mystery Bags that if you have any friends playing with you at all, you’ll feel comfortable saving your Reward Points for other things. Generally you don’t need to spend real-money Reward Points to advance in the game, but it doesn’t hurt.

The game’s interface has received a striking visual overhaul that makes heavy used of Flash-like quick displays. Art for items and enemies now displays in high resolutions over large, attractive portions of the interface. The game still doesn’t feature avatars like its cousin Vampire Wars, but collectible items are more desirable now that you can see them better. Travel to different in-game locations like Cuba, Moscow, and Bangkok is more interesting now that the locations are more visually striking. 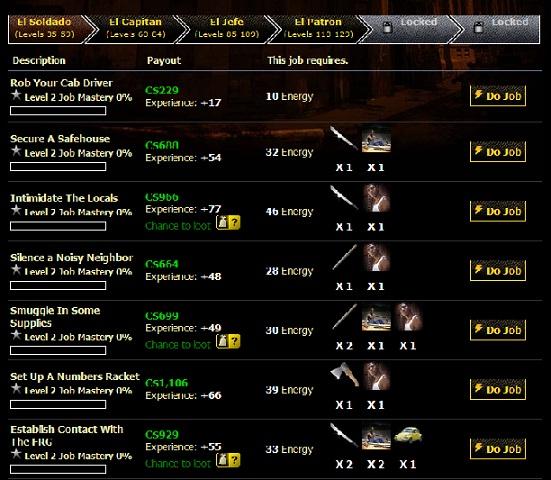 The most drastic overhauls have come to the game’s Property and Robbing systems. A few months ago, gathering money up from your properties involved a lot of extremely tedious clicking on buttons next to tiny little pictures. Now images of your properties display more prominently and you can gather cash from all of them with a single button-press. Managing property is much easier now, though veteran players will probably notice that you seem to make less money these days. Robbing used to be a way to damage other players’ properties, but now it’s more like fighting other players. You are challenged to rob sets of 9 randomly generated locations with special rewards waiting if you do so successfully.

Zynga has transformed Mafia Wars into a much better game with only a few changes. The game is still not without issues (notably, it seems to be Zynga’s guinea pig for testing new features) that can upset the gamplay. A user who is already sick of text RPGs probably won’t be convinced, but a lapsed fan may want to come back and check out Mafia Wars now. The game still isn’t all that social, but it is a more engaging experience now.

One of the dominant types of game on social networks like Facebook is the humble text role-playing game (RPG). The mafia game is a popular type of text RPG, probably owing to the popularity of the TV show The Sopranos. In mafia RPGs, players start their own mafias, staffed by members of their Facebook (or MySpace, or what-have-you) friends lists. Zynga’s Mafia Wars wasn’t the first mafia RPG, but it’s certainly the biggest.

Mafia Wars‘ gameplay is completely standard for the genre. You can take over properties, finish story missions to advance your rank, and fight it out with other player mafias to gain both money and experience. You level up as you gain experience, which lets you access more challenging jobs and new areas of the game. In practice, though, Mafia Wars gameplay is very “samey.” The only thing really separating high-level missions from low-level missions is how often you have to repeat them. 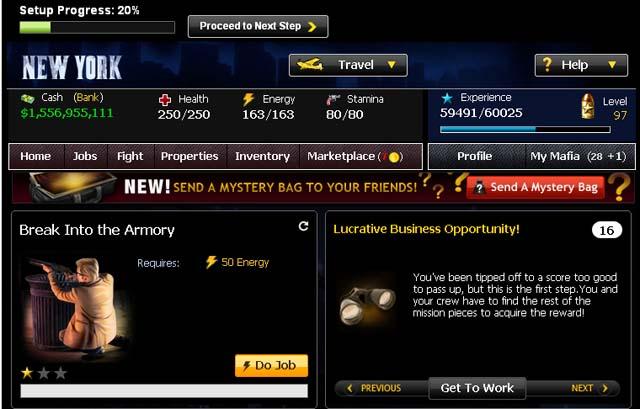 When you sign up for the game, you’ll find the size of your mafia is determined by how many friends you have on Facebook who are willing to play the game. The size of your mafia is trivial if you opt to focus on clearing the game’s story missions and profoundly important when battling other players. While Mafia Wars restricts player vs. player (PvP) combat to players of the same level, it doesn’t restrict people to mafia of the same size. If you have a mafia of 25, you will pretty much never beat a mafia of 100. Fighting other players and recruiting mafia is the main social aspect of the game, though you can do helpful things like share items with other players.

If you find yourself stuck playing Mafia Wars with a small mafia, there are a few things you can do about it. You can opt to ignore the game’s PvP and essentially play it as a single-player game. It’ll be slow going at first, and you’ll often log into your account to see a long list of people who’ve beaten you up (and possibly made you lose money or experience). You can pester your Facebook friends endlessly to grow your mafia numbers, or start friending people just to get more mafia. Your last but perhaps best recourse is the game’s cash item shop.

Like most free Facebook games, Mafia Wars turns a profit by convincing you to buy things at its cash item shop. Mafia Wars doesn’t feature avatars, so there’s no customization stuff. Everything you buy is intended to be used in the game. In practice, though, a lot of the Mafia Wars virtual goods are wastes of money that’ll only appeal to packrats or the highly impatient. There is one extremely useful virtual item, though, that players nickname “the imaginary friends.” It lets you add 10 virtual people to your mafia. It costs 20 “respect points,” or about $5 in real money. Imaginary friends will soak up the vast majority of a serious Mafia Wars player’s money. 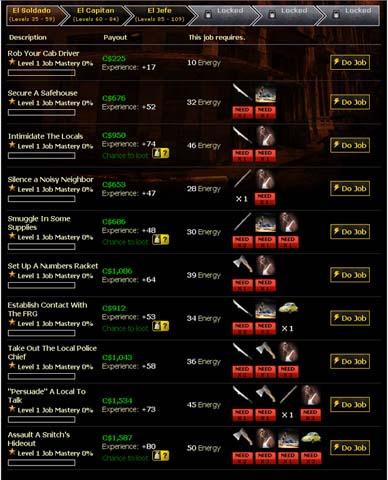 The advantage Mafia Wars has over most other mafia games is its large community (estimated at around 25 million monthly active users) and the tremendous amount of single-player content available. You can grow your mafia in New York as well as Cuba, Moscow, and Bangkok, with more expansions on the way. Every expansion plays a little differently, demanding new types of currency or unfolding by chapters.

Zynga constantly updates the game, too, so you can see entire new mechanics enter and exit the game in the span of less than a month. There’s a constant stream of new items hoard. These positives aside, though, Mafia Wars is a completely average example of a mafia RPG. It’s not bad, but extremely repetitive and not very social… unless you spend a lot of money on imaginary friends.