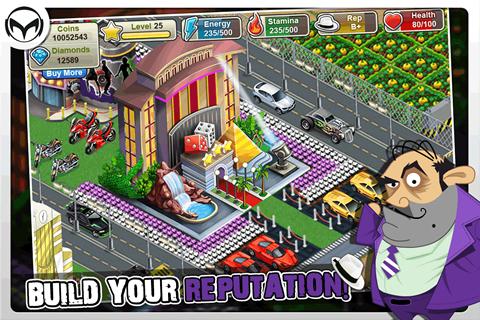 Mafia Farm may technically be a modern game, but its plays like a mash-up of two of Facebook’s oldest genres. It’s FarmVille meets Mafia Wars, only it’s not as interesting as either. And it’s not because the two genres don’t play well with one another, as the seemingly strange blend works well enough. It’s that the elements of the game feel both archaic and unoriginal, with little in the way of fresh ideas.

Much like the glut of mafia games on Facebook and other platforms, the goal of Mafia Farm is to build up an increasingly large and powerful criminal empire so that you can take on jobs and battle it out with other players. You have a home base, which you can populate with various goons, who in turn can be equipped with weapons and armor. Your base can also be outfitted with vehicles and defenses like barbed wires fences, which can increase your attack and defense capabilities.

Also, for some reason, you can buy plots of land to farm on. This aspect doesn’t really make much sense in the context of the game — after all, how many criminal masterminds raise funds by growing potatoes — but it’s a simple and familiar way to boost your money and experience.

Really, Mafia Farm feels like standard menu-driven mafia RPG with a base-building element tacked on to it. Doing jobs and attacking other players is as simple as picking an option from a menu and making sure you have the requisite energy and gear. This aspect plays identically to the mafia games players have been enjoying on Facebook for the past three years. There isn’t even a story to give you an added incentive to keep pushing forward. 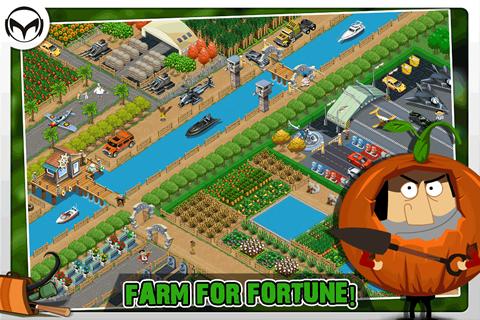 Adding to the frustration is that Mafia Farm is a very expensive game. That is, if you want to own any of the interesting in-game items. A vast majority of the vehicles and specialized thugs that you can purchase in the game require premium currency. You can buy jet skis and BMWs with standard game currency, but if you want a tank or a motorcycle, it’s going to cost you.

There are few added layers of depth in the game, such as the ability to assign skill points as you level up, and the base-building aspect does add a nice distraction. But ultimately this is a game you’ve already played, probably a few years ago. When Zynga released Mafia Wars 2 it felt significantly more modern than its predecessor. Mafia Farm, by comparison, feels ancient.