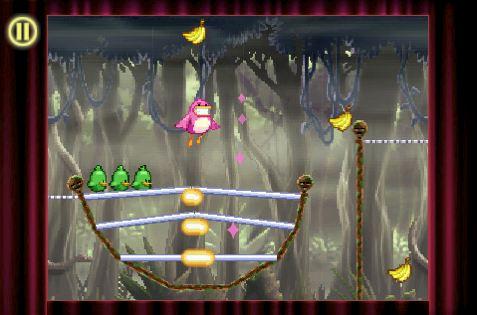 When looking objectively at a game’s idea, generally you can get a good idea of what you’re in for. Looking at the gameplay concept for Maestro! Green Groove – line running crossed with timed rhythm action – seems like a sure-fire hit. Sadly, this maestro is missing more than a few beats.

The gameplay here is taken from a Nintendo DS game called Maestro! Jump in Music. Basically, Maestro! Green Groove involves watching a purple bird running across a highwire and using your finger to flick the wire up to make him jump, down to make him drop, strumming glowing strings as you pass them in rhythm and tapping bugs as they appear onscreen to defeat them, all following a set tempo.

It’s a very simple idea that seems like a lot of fun, and at first, it is. The game’s well-written tutorials and easy demonstrations allow you to gain control of the character fairly quickly and easily then you’re off to the levels – all three of them.

Yes, you read that right. Maestro! Green Groove features a whopping three songs. Play through adaptations of Beethoven’s Fifth Symphony, Chopin’s Nocturne in E Flat Major and Dvorak’s New World Symphony, each on three difficulty levels and the game is finished. Without any achievements or unlockables, there really isn’t any motivation to replay levels for a better grade other than personal satisfaction.

In order to pass these levels, you must perform enough gold-quality notes by strumming the golden strands perfectly in time or squashing the bugs in perfect rhythm. The better you play the more of these little green birds follow you. If enough of them follow you when you hit the goal, you win and are graded on your performance from Z to A.

The game’s length really hampers any development of the gameplay concepts. At first, Maestro! Green Groove is a lot of fun, and begins to get a little more complicated. However, upon hitting the New World Symphony, the difficulty always seems to take a big leap forward. I am intimately familiar with all three pieces (having performed them all, in fact) so it is not a case of knowing the tunes. The level design really just gets harder on that third piece. 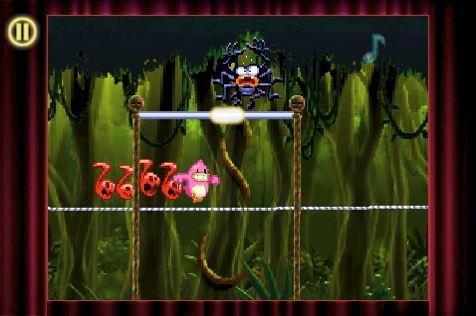 The adaptations themselves are well-designed, with lots of ways for the player to interact with the music. The melody is often player-performed, strumming ever-more-complicated melodies as you travel. But the audio quality and orchestration is so poor as to disguise the tunes sometimes. Collecting fruit produces an unpleasant percussive noise, and bug splatter with a clap. The golden strands themselves sound off, too. Rather than simply producing the melody, they sound like a sitar being played. Somehow Chopin played by a sitar loses something in the performance.

But the biggest problem with the game is your own hand. The game on the Nintendo DS obviously would have been played with a long, thin stylus. When my big, meaty finger is desperately trying to deftly traverse the song, it ends up covering a large portion of the screen. In the last two levels in hard mode this led to repeated falling off the line and unwanted jumping or mistimed notes, often causing me to lose when the end of the level was in sight.

It’s the conclusion I hate to draw. Maestro! Green Groove has such a wonderful idea, but lack of content and sub-par execution mars what could have been a great game. If the developers add more songs, perhaps some achievements and leaderboards, and solves the problem of fingers covering a screen, we could have something here. Unfortunately, Maestro! Green Groove has a lot more practicing to do.