Mae Q`West and the Sign of the Stars Review 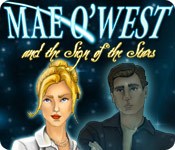 There are some good ideas in Mae Q’West and the Sign of the Stars, a hidden object game starring a woman who’s trying to find her long-lost husband by following messages left for her in her daily horoscope. Unfortunately, the game’s roughness around the edges might be too much for some players to overcome.

The game makes a poor first impression with a typo-filled wall of text that introduces the story: widowed mother of two Mae Q’West is still coming to grips with the loss of her husband Jack, who disappeared at sea, but she’s given a faint glimmer of hope when she reads the newspaper horoscope to find messages that seem too personal to be just a coincidence. It’s as if the horoscopes are speaking directly to her, giving her clues about what happened to her husband and suggesting that he might still be alive.

Guided by the horoscopes, Mae Q’West sets out on an investigation, helped by her friends Sylvia and Steve, to get to the bottom of the mystery.  She’ll search a variety of locations around town, such as shops and restaurants, the zoo, the docks, the garage, and various peoples’ homes. Gameplay is a mixture of finding hidden objects from a list and spot-the-difference challenges.

In the first of several interesting twists, the list of items to find is like a shopping list. You earn money for each correct item clicked on, and you can spend this money on unlimited hints to reveal the location of hard-to-find items. The game curbs random clicking by docking you a couple of dollars each time you click incorrectly.

In between levels, you can use leftover cash and stars that you’ve collected (there are three hidden stars in each scene) to buy Zodiac constellations, which serve as trophies. Buying all of them unlocks a special prize.

You have to find a certain number of items to advance to the next level, as well as one key item. Once you’ve found the minimum, you can click "Solve" to move to the next level, or continue playing to earn more cash and find any stars you don’t have yet. It’s a nice feature that caters to both completionists and more casual players.

That’s not all: if you find and click on the board game or video game icons you can play mini-games to earn additional stars, and there’s also a Daily Horoscope word game where you try to guess the missing word in a horoscope to decipher a message. You’ll occasionally get calls and text messages on your cell phone from friends offering advice, and there’s also a "Shuffle" button that gives you new items to find if you get stuck.

As you can see, there’s a lot going on in Mae Q’West. In fact, little too much. The ideas are all interesting, but they don’t always make sense, and many of them could have been implemented better.

For example, in the Spot the Difference levels you can only click on one side to identify a difference, and it’s not always clear which side is "correct." Clicking on the "wrong" side causes you to lose money. Also, you can replay a level right away, but you have to pay $100 in addition to losing the money and stars you earned, which makes me wonder why you would ever want to.

Items are generally easy to spot, but some of them are disproportionately tiny (or huge), or strangely skewed, or have had their colors altered so they blend in with the background (such as a wood-grain cassette tape or meat cleaver). I also have to point out that this is the first time in a hidden object game that I’ve been asked to find "fake poo" – yes, it looks exactly like you’d expect.

The English was never quite as bad as it was in the first screen, but it’s not great either. It especially hampers the fun of the Daily Crossword puzzles, because it’ s just too hard to figure out what the word is supposed to be. (A typical example: "Pisces: Your ability to concentrate and follow-through will be ____ by an attractive distraction.") The story is lengthy and detailed, but the writing itself is pedantic. Dialogue can be skipped, and if you really want to you can read the entire story on its own by selecting "Novella" from the main menu.

Another annoyance is that you can only have one game in progress at a time. If you try to start a new game, it starts you over and erases all your progress.

Mae Q’West and the Sign of the Stars is a playable, but not great, hidden object game – and that’s why the powers that be invented the free trial.

If you liked this game, try Masters of Mystery: Crime of Fashion, Cassandra’s Journey: The Legacy of Nostradamus, and Natalie Brooks – Secrets of Treasure House.