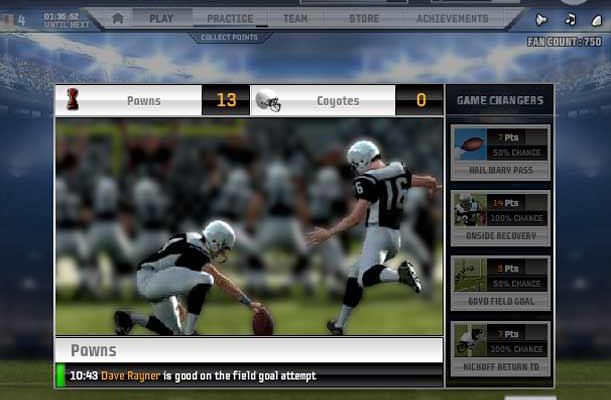 Say what you will about Electronic Arts, but they know how to time a release. Yesterday EA Games launched Madden NFL Superstars for Facebook just in time to ride on the recent success of their Madden NFL 11 for home consoles and feed off the excitement surrounding the start of the NFL season next week. It’s something of a work in progress, but after the success of their FIFA Superstars earlier this year, EA looks poised to rake in even more millions of players with this accessible football experience.

Let’s get one thing straight, though. While it’s almost possible to fool someone into thinking that some of the screenshots from the Facebook game come from the console versions, this game contains none of the endless micromanagement and lengthy setups common to Madden’s numbered games. Some will argue that this makes Madden NFL Superstars something other than Madden, but for many casual and social gamers, this is a good thing. 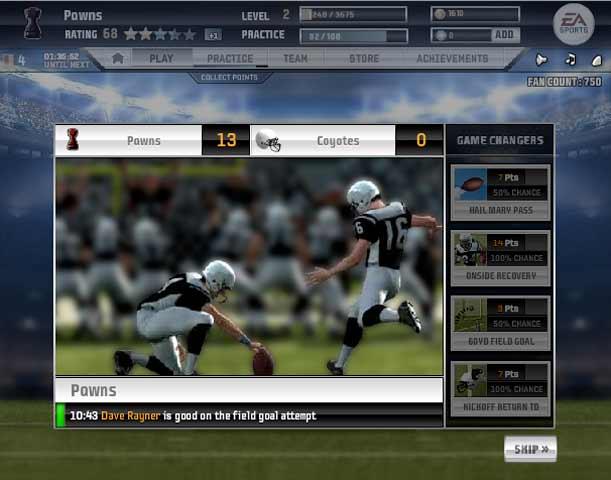 For one, you’re already playing your first game within a matter of minutes, slowed only by a brief team customization menu and the opportunity to choose your players. Although statistics buffs will find plenty to keep themselves occupied, there’s little need for lengthy calculations here; instead, players are chosen through packs of cards purchased from the game store, ranging from bronze (the cheapest, containing five low-ranking players) to the Ultimate Pack containing the game’s eponymous superstars. As with many other items, these can be bought with either in-game currency or Playfish Cash, which you can acquire for real-world money. Best of all, these are all real players, and Madden NFL Superstars give you more than 1,500 to choose from to take you to the Super Bowl.

These players collectively add to the team’s rating, which improves based on a combination of player statistics. Fortunately, these statistics aren’t anywhere near as intimidating as they could have been, and if the sight of all those numbers still bothers you, Madden includes an “Assign Best Players” option for both offensive and defensive play. Your rating can also be improved through the “practice” menu, which includes exercises ranging from a 40-Yard Dash (five minutes) to a Full Scrimmage (one day). Each of these gives you additional practice points, and it’s necessary to refresh these actions since you lose practice points if you go without training for a while. (Think crop withering.) 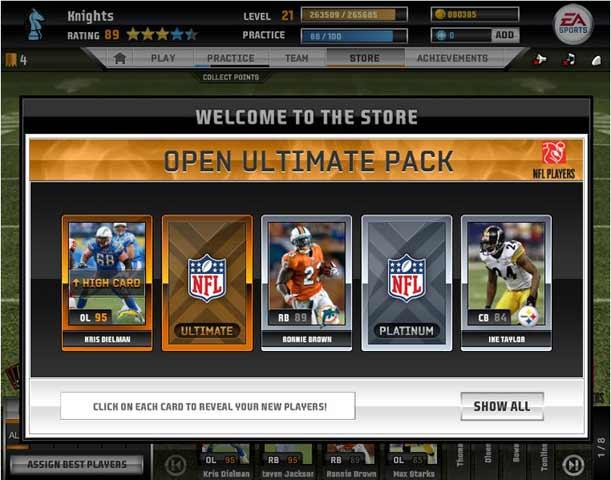 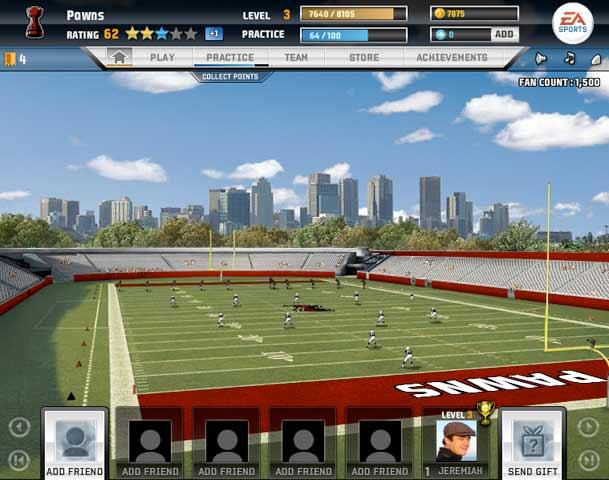 Much like FIFA Superstars, the games themselves essentially amount to skippable slideshows with commentary at the bottom, and, unless you use one of the game’s purchasable “game-changers,” it’s usually a safe bet that the team with the higher rating will win. Best used during the course of a close game, these game changers award a set amount of points during the course of a game that could mean the difference between winning or losing. Games increase in difficulty as you progress, and there’s something of a limit as to how often you can play. Every game requires one or more tickets, and these are automatically renewed over time, although if you don’t mind spending Playfish Cash it’s possible to buy more for immediate gameplay. It’s also possible to customize your own stadium using awards and in-game money, and you can fill this stadium with fans, who can either be bought (there’s got to be a corporate message there somewhere), given by friends, or acquired as you level up.

With the promise of some refinements and upcoming features, Madden NFL Superstars looks like an easy recipe for success only a day after release. Sprinkled throughout are numerous “Coming Soon” notes, such as the ability to switch out coaches during practice, which will considerably economize your training sessions. Social networking aspects are well implemented in the form of achievements and gifts, although calls for assistance must be posted on your friend’s Facebook profile. Fortunately, Madden rarely makes this necessary. 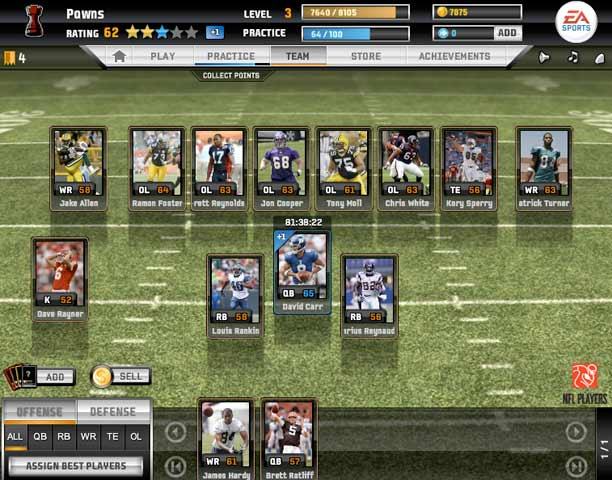 Only the most hardcore Madden players could find much to complain about here, but it’s more than a bit tempting to brand Madden NFL Superstars as little more than a tweaked and reskinned version of EA’s popular FIFA Superstars. Even so, it’s a formula that works, and given American audiences’ resistance to what the rest of the world considers “football,” this NFL-styled game has the potential to provide the hometown touchdown that EA and Playfish has no doubt been looking for on Facebook.