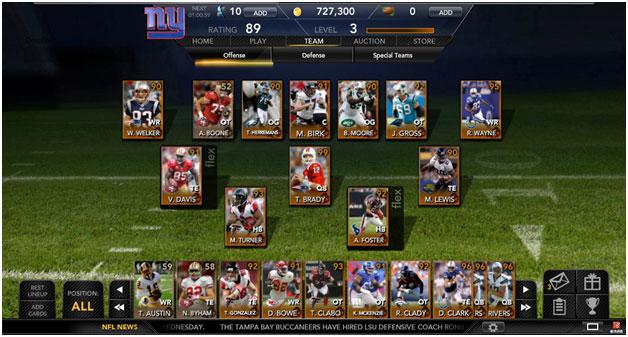 And so begins the great Maddening

The thought of NFL football as a turn-based game seems a little strange — unless you’re a Chiefs fan, in which case you’re wishing other teams would let you play that way. Yet taking turns with your friends is the focus of Madden NFL Social, which looks to shake up the sameness of EA’s last round of social sports games with asynchronous cross-platform play on Facebook and (eventually) iOS devices.

Like the previous attempt at taking the powerful football brand to Facebook with Madden NFL Superstars, your job in Madden NFL Social is to assemble the best possible football team using cards of real NFL players. Every athlete is rated in four different attributes important to his position, and your team’s overall rating is dependent on those individual ratings. You’ll start with a full complement of players from your favorite team, though they are “Base” level cards inferior to the ones you’ll find later.

The Facebook gameplay has you calling all the shots on offense, picking plays either by type (run, short pass, long pass, etc.) or formation. All of the ratings of your offensive players and your opponent’s defensive players are taken into account to determine the result of each play, though the key players are highlighted to give you an idea of some plays that might prove particularly effective due to mismatches. It’s just like being an offensive coordinator, minus the frustration when your quarterback can’t hear the call and has to burn a timeout.

You get to keep calling plays until the drive ends with a score, a turnover or a punt, at which point you’ll receive coins and experience points based on how well you did. Then the ball’s in your opponent’s hands — fairly literally, as he or she can play whenever time permits, and you’ll get a notification when your next turn is ready. Every drive you start takes one point of Energy, which refills over time as in many social games. The nice thing is that you can have multiple games going at any given time, and if you don’t have enough friends playing, you can also get matched up against random opponents. Completing full games gets you some bonus coins and XP.

Leveling up refills your Energy instantly and also unlocks more selections for your playbook. That’s crucial because you start with so few plays; even basics like spiking the ball to kill the clock aren’t available to you. And as we all know, that’s not good. Annoyingly, even after plays are unlocked, it still costs coins to call them. The only way to get more free plays is to purchase Play Packs with premium currency, which is an unpleasant arrangement, to say the least.

Improving your team is somewhat easier since Madden NFL Social is pretty generous with the coins, and new Player Packs are reasonably priced. Gold and Platinum players found in the more expensive packs can really give your team a boost, and the Auction House can be used to target specific players at positions of need or just make sure you stick with guys from your favorite NFL team. Anyone can post players for auction by naming a starting bid and a “Buy Now” price, and the whole process seems to operate smoothly. 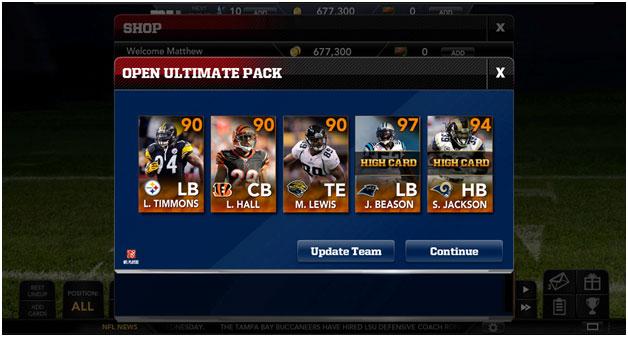 The Predictor mode returns, allowing you to win coins by correctly picking the outcome of the real life slate of pro games. But aside from sending gifts to your in-game friends, that’s about it. There are currently no league, career or tournament modes, or any kind of continuing gameplay that you’d expect to see in a game like this. Except for making your team better, there’s no real feeling of progression or sense that you are working toward a goal.

Fans of defense will also be disappointed since, well, there isn’t any. It will be the same case with the iOS version (launching soon), though at least you’ll have control over your offensive players in a way that looks a lot like NFL Pro 2013. Supposedly your defensive ratings and available plays will make a difference, so we’ll have to see. At least it appears the visuals will be pretty sweet from the screenshots that have been released so far.

Madden NFL Social seems like it could have been much more than it is, and maybe it still will be. Right now it seems like a step forward and at least a step back in other ways from Superstars, and that’s probably not what most football fans were hoping for this far into the NFL season.