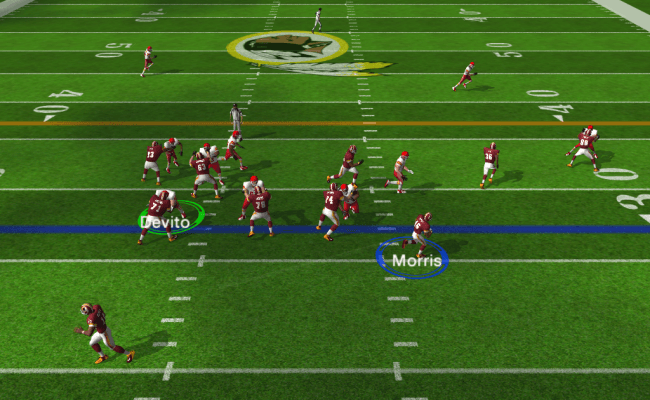 Console gamers occasionally complain that the Madden NFL games don’t change that much between the years, but the same thing can’t be said for EA’s mobile football efforts. Last year gave us Madden NFL Social, across-platform effort that was exactly what it said it was. For the series’ silver anniversary, Madden NFL 25 on mobile devices switches gears to be closer to the console experience, but it’s mostly just a free-to-play, watered down version of Ultimate Team mode.

While the focus on consoles is usually improvements to the running game, the big news here on the mobile end is the ability to play defense. I’m not kidding either, as Madden NFL Social was an offense-only affair. Making it happen required a complete rethinking of both the gameplay and the controls, and to its credit, EA put some thought into both. 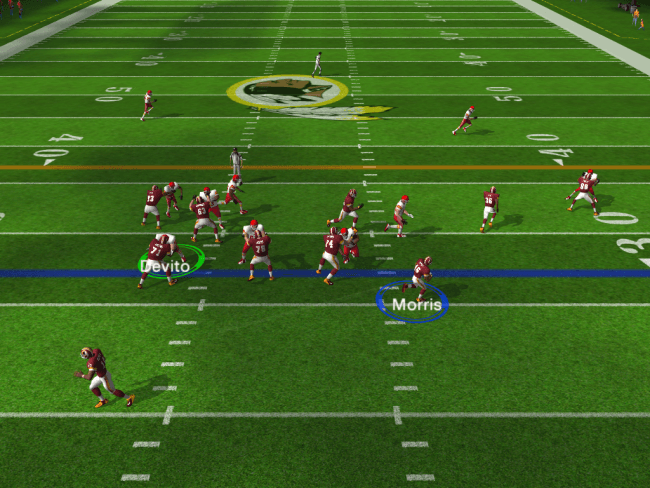 On the field, Madden NFL 25 features touchscreen-specific controls that aim to make things easier for mobile gamers. Running plays are performed by simply dragging a finger to lead the ballcarrier, plus using a wide system of swipes to pull off moves like jukes, stiff arms, and spin moves. On passing plays, you can tap on either side to move the QB in the pocket and tap on the correct icon when it turns green to throw to an open receiver.

It’s a great system in theory, but the execution falls a bit flat – and ironically, mostly in the running game. The swipe system is overcomplicated, and dragging means you’re obscuring the screen with your own hand much of the time. Mostly though, the touch controls just aren’t very responsive, and you may find yourself exercising the option to revert to a virtual thumbstick.

Things are better on defense, where a two-finger tap switches you to the man closest to the ball and there are separate commands for regular and diving tackles. Pass defense is mostly automated, but you can swipe quickly anywhere on the screen to try for an interception if someone is in position to go for the ball. 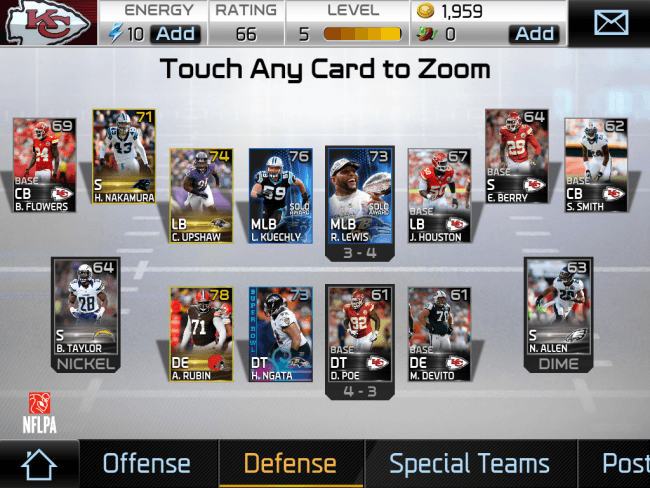 Only the solo mode puts the defense in your hands in something approximating real games. The general idea is similar to Ultimate Team or past Madden social/mobile games, as you begin with a below average selection of players from your favorite NFL team and attempt to acquire better current and legendary players to build the best possible team. Coins won during play can be spent on random player packs, and an auction house permits bidding on or selling individual players.

Only you don’t get to play full games right away, instead unlocking them through a series of specific challenges. Completing the challenges and winning the specified games gets you increasingly good player cards to add to your squad, but it’s still nothing like a season mode. Exhibition games can be chosen as well, though you’ll need to improve your team a bit before the standard NFL teams.

Head-to-head play is asynchronous and can be done against friends (via Facebook integration) or randomly selected opponents. You play an offensive drive, submit it, and then wait for the other team to do the same. Multiple games can be in progress at the same time too. Failing actual online mobile play, this is a decent solution.

Another area that can properly be called decent is the look of Madden NFL 25, which is kind of a mixed bag. The player models are okay if a little blocky, and the real NFL stadiums are full of two-dimensional fans. Animations are fluid and varied, and console gamers will recognize quite a few of the mannerisms and quirks. Let’s just say there’s a definite Madden feel. 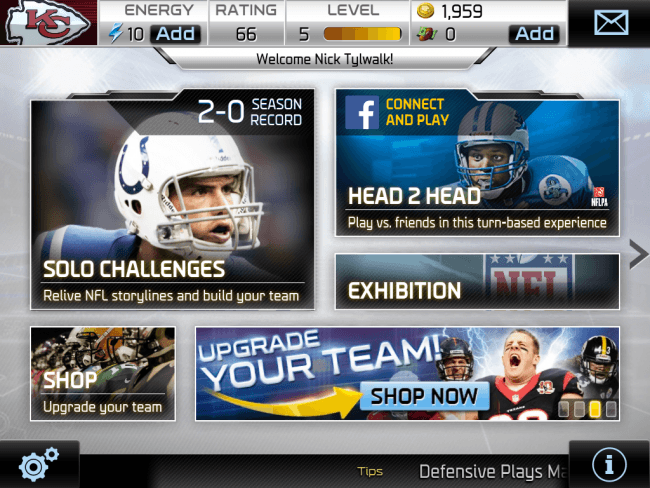 In-app transactions can be utilized to buy better packs right away or refill the energy that unfortunately constrains how long you can play in a single session. They’re also needed to help get around the game’s most annoying design feature, which is the play selection. You start the game only able to call a few running and passing plays, unlocking more only as you level up. As you can imagine, it gets old real fast making the same calls over and over, and spending real money or a ton of patience are the only ways to get around it. A few plays can only be obtained this way, toeing the line between frustrating and unfair.

It’s certainly commendable that EA wants to give mobile gamers a “real” Madden game, but this still isn’t quite it. Perhaps the best thing that can be said is that it’s getting closer each year, so there’s hope that it will happen at some point. Until then, Madden NFL 25 will have to do unless you feel like toting your console around in a backpack. Hmm, maybe… no, that’s probably not a good idea.