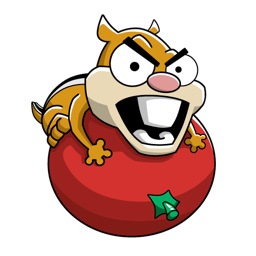 MadCap’s name isn’t the only thing that doesn’t make sense.

It’s convenient that MadCap has the word “mad” in its name, as you’ll likely be driven to insanity after the first few levels. In this post Angry Birds era, games in the level-based “catapult” style have some pretty big shoes to fill, but while there are many other games on various platforms that can at least successfully mimic that style of play, MadCap is a downright mess.

In MadCap, for some reason, squirrels really hate barnyard animals. I can’t really tell you why, but I can tell you that the squirrel army has decided to team with a dark monkey-like creature to fling exploding tomatoes at defenseless sheep, cows, pigs, and other assorted mammals, all for what appears to be the sake of doing so.

In each level, your goal is to cover each barnyard animal in tomato… sauce, by clicking on the monkey that rotates back and forth when you feel that the tomato’s momentum will see it through or around various obstacles, or just over long distances to reach the poor creature on the other side.

That being said, levels come in two varieties – either incredibly easy, or maddeningly difficult. Actually, difficult might be the wrong word, as it would imply an element of skill. With MadCap, you’d have better luck with the Slots in Vegas than you do with completing these levels. There’s no strategy, simply click on that monkey as fast as you can, or as randomly as you can (he never runs out of tomatoes) and hope for the best.

Levels are scored and given a 1-3 tomato rating at the end, and by completing all levels in a set, you’ll receive further sets, and so on. As you go, the level design becomes a bit more complex, with switches to pull, tomato-eating jack-o-lanterns with hair, and other completely nonsensical jibberish. As more elements are added to each level, you’ll be required to have even more luck to complete them, which is made all the more difficult due to the game’s horrible physics.

While you might have stood a chance completing these levels otherwise, the game’s physics work against you, by having tomatoes bounce randomly off of objects with newfound momentum (as though they were rubber bouncy balls), or simply flinging a tomato in the wrong direction, even if its projected arc (which you have to discern in your head) is entirely different from what actually happens.

Graphically, MadCap has colorful, unusual looking animals, but an overall graphical quality that’s par for the course. The soundtrack also isn’t terrible, but when the only good things you have to say about a game are in its technical departments, that’s insult enough. It’s unfortunate that there’s such a carelessness of design present through the experience, as I know I’m always ready for more gameplay of its type, but only when it works. With MadCap, it simply doesn’t.

With so many other options for this catapult-esque gameplay (even if you have to look elsewhere, like smartphones or tablets), MadCap shouldn’t even enter your radar. The game is sloppy, overly complicated, and simply isn’t enjoyable on any level.