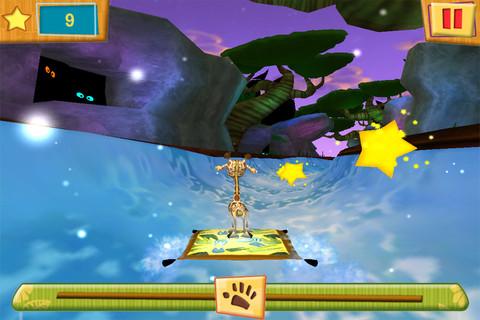 Surfing the waves of preschool learning

Apps based on popular film franchises are nothing new, and they vary wildly in quality. Featuring youngster incarnations of the central zoo-ster characters from the Madgascar franchise, Madagascar Preschool Surf n’ Slide promises to deliver a mixture of entertainment and learning which will prick the interest of many parents. But it’s a notoriously difficult combination to get right.

Given the target audience of preschoolers, you’d expect this to be a simple game and you’d be right. First our aspiring surfers get to pick a baby version of one of the four main characters from Madagascar and something for them to ride on, ranging from a crate lid to a magic carpet. Then they’re off down a gentle twisting watercourse using a big slider at the bottom of the screen or a tilt action to move their surfer left and right in order to collect stars and avoid obstacles. Sometimes the rider halts and the player must answer some simple multiple choice questions before being awarded a choice of virtual “stickers” and allowed on their way. At the end of each course the kids get to play with the stickers they’ve earned on a variety of different backgrounds, just like a digital version of a reusable sticker play book.

The game is not only very easy to control but extremely forgiving of errors, as is entirely appropriate for its very young demographic. Failing to collect stars doesn’t carry any penalty and neither does hitting an obstacle. Instead, doing things right earns celebratory smiles and dances from the surfer on the screen, while collisions make them look uncomfortable and slow them down. Occasionally other items appear, such as a rainbow which makes your racer trail colourful streaks or a magnet which attracts stars, but again missing the items just means no fancy effects, rather than punishing the player.

Similarly in the multiple choice questions, getting a wrong answer just removes it from the selection so the kids can keep trying until they get it right, which is a great way to aid learning at this tender age. There does seem to be a surprisingly wide range to the difficulty of the questions, though. They go from simple “odd one out” and colour identification to correct selection of letters and numbers, which is really mixing too broad a span of target ages and abilities in a single game. Some sort of difficulty setting would have been useful.

There is one benefit from collecting lots of stars, and that’s the chance to use them as currency in the Jumpstart virtual world, a sort of massively multiplayer game for kids. This is a subscription service, and all credit to the publisher for not using this app to aggressively market the service to children. You only discover the link by going to the “parents” section of the menu, and even there the information is presented in an understated and factual manner.

But back to the app itself. The graphics are mostly good, with cute and detailed avatars to play with and four different courses to slide down, all of which have plenty of characters and scenery decorating the banks. However, the textures are a little grainy and the undulating motion of some surfboards as they slide over apparently calm water is bizarre. The sound, though, is excellent. A variety of funky polyrhythms play in the background and the action is accompanied by plenty of samples lifted straight from the movies. As an app for preschoolers there is of course no text, so the instructions are narrated by a kind and encouraging female voice with no evidence of clipping between samples to save on voice acting fees. It’s an audio delight. 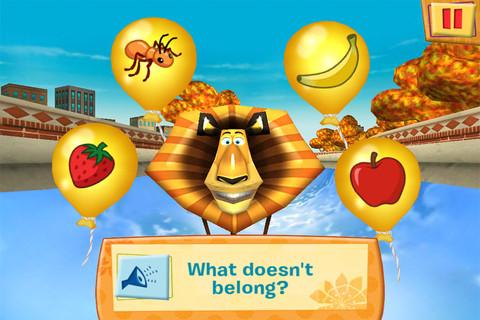 The sticker book scenes in-between each surfing level are a nice touch, allowing the player to use the stickers they’ve earned in some imaginative play. But more could have been made of this aspect. Some of the stickers have very basic animation but no more, and there’s no sound or hooks to encourage exploration of this feature. It feels like a badly missed opportunity in an app that otherwise keeps kids on fairly fixed rails, feeding little minds through questions rather than allowing free rein to their imaginations.

Madagascar Preschool Surf n’ Slide is a solid app that does a good job of combining a fun game with some learning activities, and has been very well tailored toward its target audience. That said, it’s not a terribly innovative piece of work. It lacks the charm and character, the imaginative and exploration elements that are shared by the best children’s apps, and you can find similarly simple object collection games on many kids websites. This does have the Madagascar license though, and that could be the tipping point for the legions of parents whose little ones have fallen for the delightful zoo-sters from the movies.