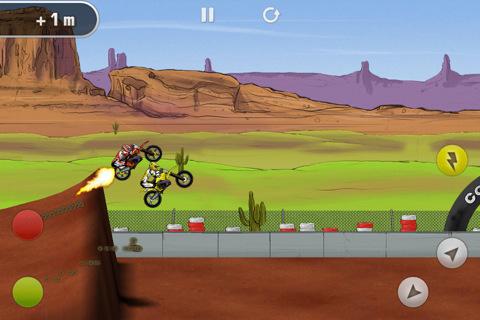 Ever been worried you might have forgotten how to do something you used to master day in, day out? “It’s like riding a bike,” people say – an especially slack defence when you think about it, given almost every one of us no doubt spent hours struggling to do just that, falling off and picking up bruises and grazes aplenty in our front yard.

Indeed, it’s not hard to imagine that, had those very same wise fellows ever attempted to mount a dirt bike and haul it across a series of mud tracks, they might not be quite so keen to trawl the “riding a bike” sound bite out with so much frequency.

The great leveller that the iPhone is, however, means that a relatively complex and obviously difficult sport such as motocross can be delivered in a way that makes having a go at it a palatable prospect to all.

While Turborilla is most definitely not the first developer to attempt such a feat, it is one of the most successful. That’s because understanding both the tools and the goals behind Mad Skills Motocross‘ 2D take on the sport doesn’t take all too much explanation.

In short, your main task is to keep your man on his bike, all while either beating your opponent to the finish line, or pulling off a number of mid-air tricks to pass the level.

While there’s no guarantee you’ll achieve such aims, the controls certainly can’t be blamed. In its default setting, acceleration and braking are handled via two buttons on the far left – predictably green for go, red for stop. Steering – i.e. tipping the balance of your bike forward or back – initially comes down to using two arrows on the far right, though if you prefer it, the accelerometer can be employed to handle your balance.

It’s learning how to keep things steady from the start of each contest to the finish line that is the game’s meat, though prudence comes with little reward. Even though your opponent will often lose his footing himself, winning races relies on your ability to go as fast as you can throughout, using the steering to make sure you hit the ground with little interference rather than slamming on the brakes endlessly.

Indeed, even the slightest of tips one way or the other as you enter a jump can alter the speed at which you land, which then in turn impacts on your ability to pick up the pace afterwards. Only when the races begin to stack up do these true subtleties that define Mad Skills Motocross‘ play come to light. 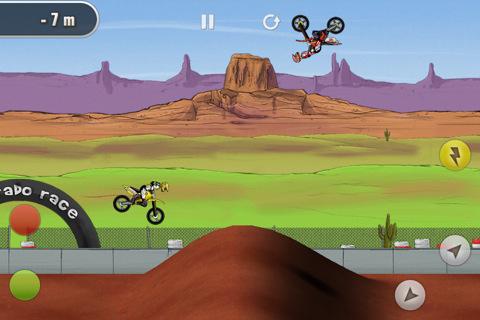 This is all before you even consider the need to throw in mid-air backflips and tricks on command, and the power ups (jumps, boosts, etc) bring a new, reckless, edge to play. It’s fair to say, though the process of taking control of your bike is a simple one, actually mastering the track beneath your wheels is not. Mad Skills Motocross is by no means the ‘easy’ game it might initially present itself as, in any sense.

In fact, if there is one stick it’s possible to beat Mad Skills Motocross with, it’s the fact that very rarely is it possible to win a race on your first outing. Given you have no idea what form the track will take – its various lumps and bumps unknown until you actually encounter them – learning to tailor your approach to each course is only something you can successfully undertake once you’ve pinned the track down to memory. That, of course, means restarts aplenty.

Aside from that, however, Mad Skills Motocross is a game with much hidden depth. Though at first glance it looks like the kind of title almost anyone could crack within an afternoon, in truth Mad Skills Motocross demands – and, indeed, deserves – much more attention than that, serving as an example of how to get the balance right, on all fronts.