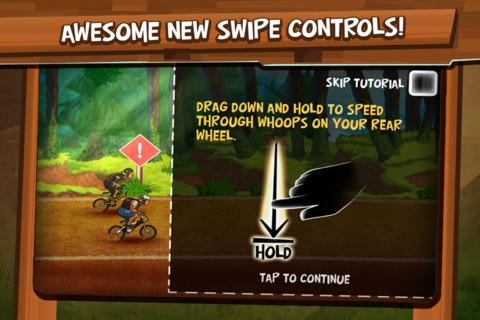 Mad Skills BMX is true to it’s title: it takes a lot of skill, and will make you very mad

Representing just its second appearance in Olympic history in London this year, BMX is an insanely challenging and exciting sport. Bikers are pitted against each other in a series of on and off road courses, testing their ability to make impressive jumps, manual over hills, and output their opponent without wiping out from a bad angle. Mad Skills BMX, the companion to Turboilla’s Mad Skills Motocross, does a very accurate job of emulating the feel of a pro bmx racer. And it isn’t always a good thing.

Despite pitting racers against each other on separate vehicles, Mad Skills BMX plays very similarly to its predecessor. Keeping a finger down on the left side of the screen allows you to accelerate, while swiping on the right side of the screen controls whether or not you manual, flip, or lean forward. The swipe controls are admittedly slicker than its predacessor’s buttons, but both schemes are about as simple to use (and challenging to master).

Also back are the game’s slick 2D visuals, which are more polished than ever. Multiple levels of land fly by on the background while you soar through the air, only to meet your eventual doom on a spectacular mislanded wipeout. The punk rock tunes by Strungout are the perfect jams to get you pumped for an extreme race, and you can even replace his music with your own if that doesn’t do the trick.

The biggest thing that Mad Skills BMX advertises might also be its biggest downfall: realism. Despite being set in a 2D world, the physics of each ramp and obstacle are programmed to apply to your racer in a way that emulates the real BMX experience. While things seem simple enough over the first three or so levels (do a manual to clear small bumps quickly, slide up to jump big ramps, slide to the sides to do a trick in mid-air and earn time points), nothing the tutorial teaches you can prepare you for the real deal.

Completing a stage is a process of trial-and-error, and it can get frustrating very quickly. Several stages have moments that feel counterintuitive: such as some races that seem to discourage jumping as high as you can after hitting a ramp at full speed. Even coming from a family of bikers and doing a little BMX myself, there were plenty of stages that just couldn’t sink in for me, even after dozens of attempts. The one bit of relief from all the frustration is the game’s instant restart button – appropriately stylized as a censored curse word – which allows you to start right at the beginning the minute things get awry.

The best iOS games follow the structure of “easy to play, difficult to master”. Mad Skills BMX accomplishes this to some degree, but the ‘difficult to master’ bit really shines through when an AI opponent is constantly forcing you to eat his dust by the end of the first set of stages. There are 40 stages in total, and while I begrudgingly fought my way to explore them all, I could easily see the average gamer giving up before seeing everything that’s available. 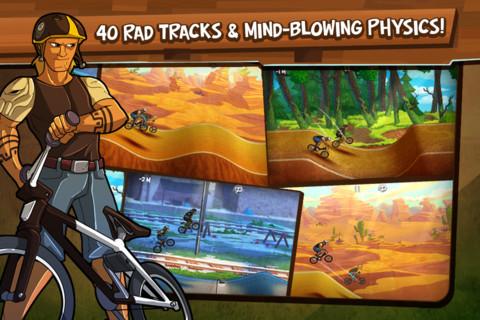 Multiplayer is currently available via Facebook integration in the form of ghost racing, just like the original title. By the time Mad Skills BMX had released to the public, I was still having some difficulties. However, after watching a few of my friends’ best runs once they had their hands on the app, I was able to improve a little by copying their form.

In the end, Mad Skills BMX is a game that really questions just how ‘extreme’ you are. It isn’t forgiving, and it forces you to get better, or simply accept your inferiority as a consumer of dirt.  The challenge curve will be the direct determinant of whether or not you like the game: either you’ll fight through and emerge victorious, or fail often and feel insulted. Because of its similarity to the original Mad Skills Motocross game, I can’t outright recommend it over its big brother with more levels, but it’ll definitely fuel your high-speed, high-frustration tolerance.