Mad Rocket: Fog of War Review – It All Becomes Clear 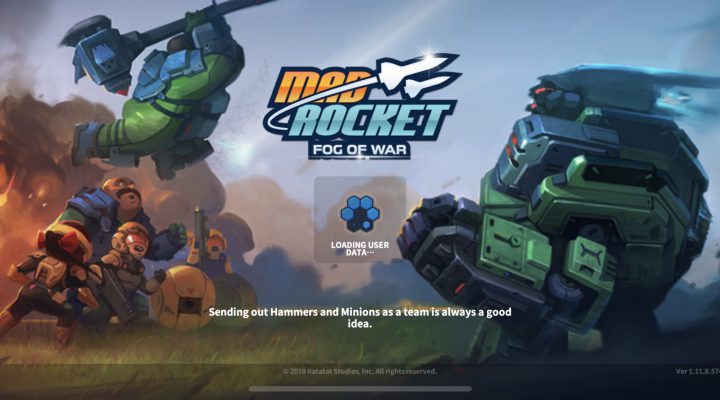 Fog of war is a welcome twist

IAPs not too intrusive

Some trial and error required, especially at first

Mad Rocket: Fog of War is the latest release from Ratatat Studios, published by Four Thirty Three. Set in a virtual world consisting of floating islands and plenty of weapons, it takes the traditional ‘base building’ genre and adds an interesting quirk: your enemy’s base is covered by a thick fog, giving you an extra element to consider when planning your assault.

When you initially jump into the game, you can choose whether to use your Facebook profile, Game Center, or jump into the action as a guest. We’d recommend Facebook or Game Center, as otherwise your progress is not saved if you lose your device and it can’t be recovered. We made this mistake ourselves and it was very frustrating.

After a brief loading period, you jump onto the deck of a ship with your motley crew. Members include Ben Rocker, the Admiral, and your main guide, Olivia Hartnett. You’re quickly promoted to role of Commander of the Mad Rocket Team. Your mission is to destroy enemy bases while at the same time building a secure base to protect yourself against your competitors.

There’s some explanation lacking at the start of the game – the tutorial does a good job of explaining how to build your base, but it’s a bit scant on details of when and how you can make attacks. It took some trial and error before we worked out that the bottom-left bar fills up during battles, and you have to wait for that until you can deploy more units. Once you’ve got a handle on that you won’t have any more issues.

Initially you’re given an overview of your base and the various different building types. After that you can start upgrading and placing new structures. Don’t worry if you start building in a certain way and later realise you’d like to change it all – there’s a handy mode where you can reconfigure your entire base and move around all the buildings and layout to your heart’s content.

This becomes very important when you’re thinking of ways to defend your base from enemies. Strategies include placing attack turrets, laser destroyers, and land mines around to repel the various units you’ll come up against. It’ll be partly trial and error – don’t expect to win every battle or defend yourself perfectly – but over time you’ll get to know what works.

Upgrading your buildings costs gold, which you earn in battles or by converting gems. You can speed up some upgrades by using your gems – we’d only advise this if you’re in a rush, however. We played the game for around 6 hours and didn’t feel the need to purchase any IAPs, but there are the usual bundle packages available, helping you to progress faster through the game’s levels.

While some players may be more interested in building an impregnable base, we found the attacking part of the game the most fun. Once you’ve gone through a brief tutorial and made some upgrades to your base and initial units you’ll be allowed to enter the multiplayer arena and seek out other player bases to turn to dust.

It takes no time to be matched with a foe at a similar level and pitched into battle. You get 90 seconds to destroy the base, and for each building you take out you gain extra time. Early on, we found it quite easy to win, but as we progressed we started to encounter bigger bases with 25+ buildings to destroy and lots of defence measures to overcome. This meant we had to change our attack plans constantly during battle and it all became a bit of a blur of pressing and hoping.

A key tip is to target your opponent’s HQ as soon as you find it. Once you’ve dismantled that, the fog vanishes over the base and you can see where all the buildings are, helping you to find targets and pick the right attack units much more quickly. We would send units into different areas of the map as our first attack and try and locate the HQ as quickly as possible – most of the games we lost were because we didn’t locate the HQ until too late in the battle, leaving us with no time to destroy it.

With an active social media presence on Facebook and Twitter, there’s a solid community out there who are happy to answer questions and discuss tactics – plus there are support updates direct from the developers. Check out the Facebook group here and drop in any questions you might have.

While this game isn’t an entirely new proposition – there are many similar games on the App Store already – the Fog of War concept really adds a new element to the genre. We loved the graphics and felt they were extremely detailed, which added to the thrill of unloading a whole battery of weapons in the heat of battle.

If that sounds like your sort of thing, you won’t be disappointed. You can download Mad Rocket: Fog of War via the App Store and Google Play now.