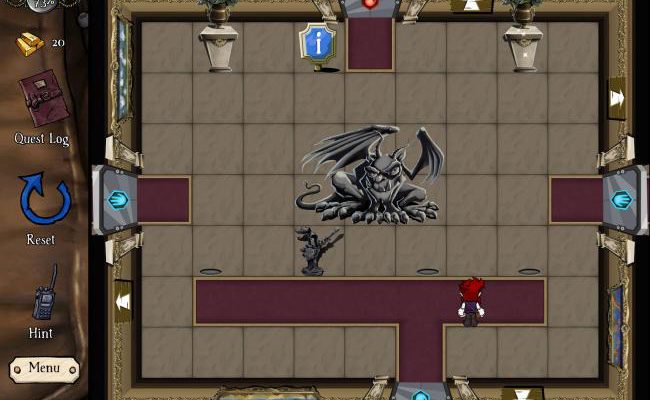 With clever puzzles and plenty of content, MacGuffin’s Curse will have you dancing in the moonlight

Whoever came up with the saying “a blessing or a curse” didn’t exactly cover all bases. Take MacGuffin’s Curse for example, which turns out to be both a blessing and a curse.

With the ability to switch from being a weedy little thief into a huge, beefy werewolf and back again, MacGuffin’s range of skills just increased tenfold. Unfortunately, the city is in complete lockdown and on the hunt for him, And to make matters worse, somebody appears to have arranged every single part of the city into a sliding block puzzle. This is the basis for MacGuffin’s Curse, the latest release from Jolly Rover developer Brawsome, and it’s a lovingly crafted adventure, with plenty of head-scratching conundrums to solve.

It all starts when MacGuffin steals the Lupine Twine Amulet from the city museum, giving himself the power to switch from being human to beast and causing the authorities to take a rather large interest in him. Your job is to navigate hundreds of rooms, pushing blocks around to activate switches and open doors to escape.

When MacGuffin is human, there isn’t a whole lot he can do besides pressing the occasional switch and climbing through tight gaps. However, stand in the moonlight and you can bring out the beast in him, giving him the superhuman strength to push heavy blocks and weigh down switches. Through a combination of the two different sets of abilities, MacGuffin needs to power up the doorway in each room and continue on to the next one.

Along the way there are plenty of people who need your help. The game is a sort of puzzle/adventure game hybrid, with main quests to complete as well as side-quests that will bag you valuable gold and points. These usually involve exploring specific areas of the city or hunting down missing items that may well be stashed about in places you already visited. 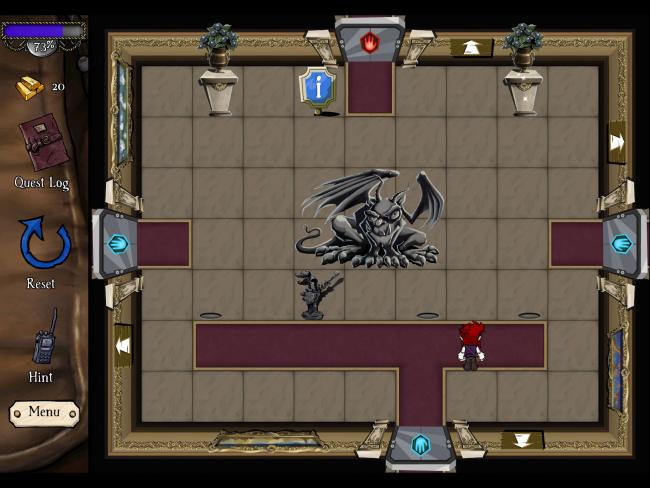 MacGuffin’s Curse starts off slowly, with rather simple puzzles to solve, but soon evolves into a real brainteaser and a half. There are some really clever set-ups hidden away in this title, and we found ourselves constantly surprised at how baffled we could be when it came to a simple block-sliding game.

There’s a serious amount of content here too, with over half a dozen hours of gameplay – and that’s not even counting the side missions. With a lengthy game like this, there needs to be a good storyline, and fortunately that’s exactly what MacGuffin’s Curse has. There are plenty of people to talk to and a good number of twists and turns along the way, and all the while there’s a great deal of humor involved that had us smiling throughout.

As mentioned before, MacGuffin’s Curse gets pretty tricky, to the point where we simply had no idea how to proceed. Brawsome is clearly all too aware of how taxing the puzzles can be, and so has bundled in a hints system which throws tidbits of info out regarding how you may want to proceed. If you get really stuck it’s possible to skip puzzles entirely, and so it’s pretty difficult to ever become truly frustrated with the game. 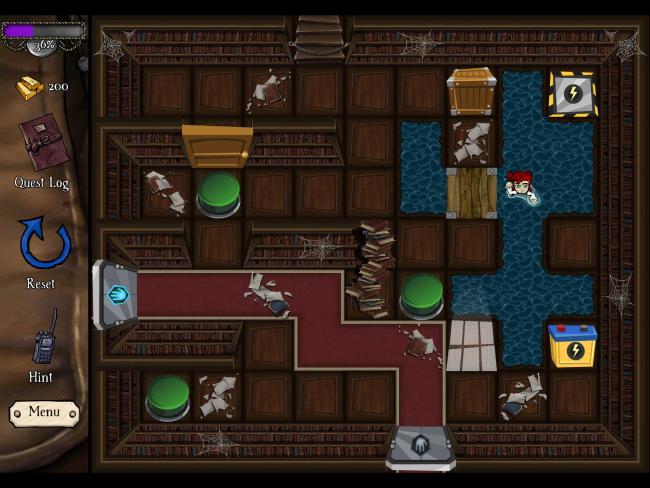 A couple of key points bring MacGuffin down a peg or two. While certain scenes can look rather pretty, overall MacGuffin’s Curse isn’t exactly a looker, with odd-looking characters and some awkward moving animations. It’s not so ugly that it makes playing difficult, but it’s definitely not a game that’s going to win a beauty contest anytime soon.

The puzzles also become rather samey after a few hours of play, and we didn’t find ourselves that excited by the prospect of pushing onwards anymore. That’s not to say the level of genius drops – quite the opposite, in fact – but the moments of epiphany definitely die down and every room begins to look the same as the last.

Finally, a small but notable gripe – the button configuration is very strange indeed, with some actions requiring the letters N and M, and other times presses of the Ctrl key needed. Other key choices don’t seem to make much sense either, and it takes a while to get used to the odd layout.

MacGuffin’s Curse is a great, meaty puzzler that will really get your brain cogs whirring. With so much content, the formula was bound to feel a little samey eventually, but by the time that feeling sets in you’ll have more than gotten your money’s worth.