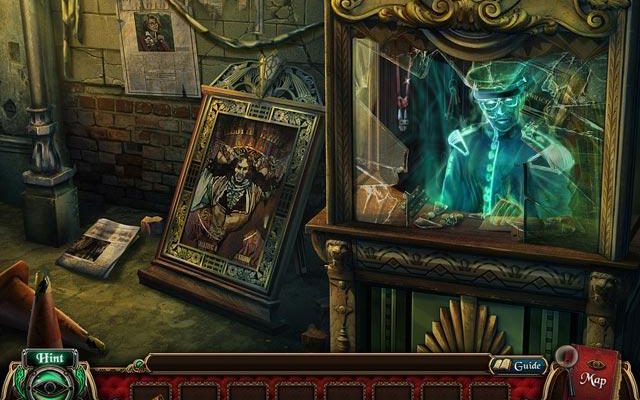 Take a trip through a historic, haunted theater and discover the secret behind the tragic fire that destroyed it.

Blue Tea Games just keeps getting better and better. The developer responsible for the amazing Dark Parables and Enlightenus series has once again hit a home run with its newest franchise, Macabre Mysteries. The first title in the series, Curse of the Nightingale, takes what Blue Tea does well—gorgeous graphics and an intriguing storyline—and manages to crank them up to yet another level; the result is one unforgettable hidden object adventure.

The game starts with you heading to meet your grandfather, having received a mysterious invitation from him to meet at his old stomping grounds, the Nightingale Theater. Why is this mysterious? Because the once-popular theater’s been closed for 40 years, ever since a terrible fire nearly destroyed it. Oh, and by the way, your grandfather’s been missing since the night of the fire so why would he want to visit now? Curiosity piqued, you head to the odd rendezvous only to find the theater derelict, the gates chained and a ghostly ballerina who seems to ward you away. Not one to be daunted by an unfriendly apparition (or a big, bloody “Stay Away!” sign) you make your way into the theater and begin searching for clues to your grandfather’s disappearance. 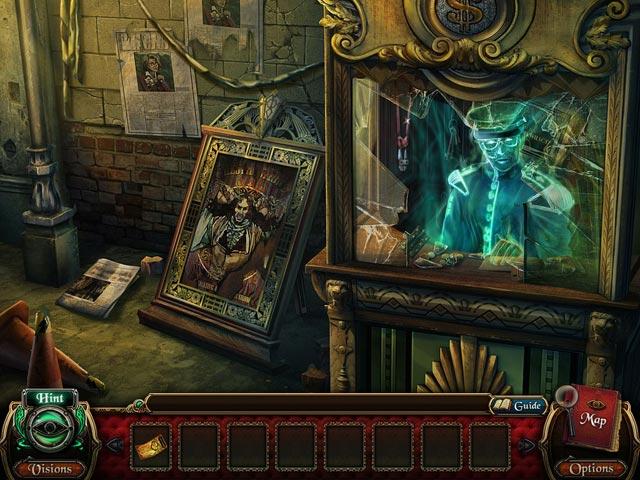 The first, most obvious thing about Curse of the Nightingale is that it’s beautiful enough to make your eyes water. Each hand-painted scene is incredibly detailed and boasts some of the most gorgeous lighting effects seen in a hidden object game to date. It’s easy to spend too long in the first few scenes, admiring their beauty and construction but the sheer number of the game’s bewitching scenes demands you keep moving. The second thing you’ll notice about the game is its careful design. Both puzzle locations and hidden object scenes are extremely well conceived, interwoven in a way that keeps the story moving and prevents you from getting lost or frustrated, not knowing what to do next. A further help as far as that goes, is the game’s journal map, which lets you know exactly where you are and where the next point of interest is, and the Hint Vision button which allows you to drag found items onto it, to obtain hints regarding their usage.

In addition to puzzles and hidden object play, the game offers an interestingly unique mechanic that enables you to see visions of the theater’s storied past. Whenever a glowing eye icon appears, you can click it and essentially time travel; this adds even more depth and complexity to the theater’s locations as you see how they were 40 years before. Hidden object scenes are handled somewhat differently than usual, with actual pictures of the search-for items instead of verbal lists. The idea in them is also different, since the point isn’t to find random things, but to find the pieces necessary to reassemble larger objects like door handles and lamps. The puzzles in Curse of the Nightingale are fairly straightforward, generally done in order to unlock a box or open a locked door but they still deserve praise for their amazing custom artwork. On the down side, they’re sometimes a touch obscure, and the solutions to them a bit nonsensical. 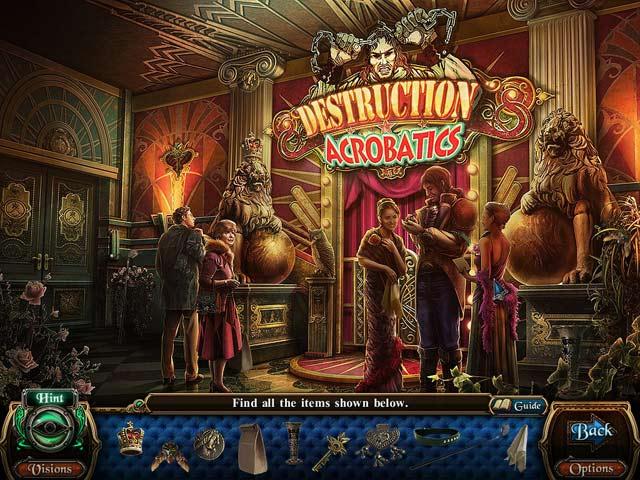 Aside from this, other interesting choices by the Blue Tea team involve providing players with subtle hints by labeling objects with reference to their use, and allowing you to skip puzzles at the expense of disabling the Hint button for a five minute span. They also include collectibles in the form of “Macabre Items”. These are objects found in various locations, that subtly change and morph into something else. They’re difficult to spot but if you collect all 20 of them, you unlock a mess of Bonus Content, including bonus puzzles, movies, art, wallpaper and music. Finishing the main storyline also unlocks a bonus chapter wherein you get to snoop even further into your grandfather’s affairs. This extra chapter is good for roughly another 40 minutes of play and serves as a sly teaser to the next title in the Macabre Mysteries series.

Macabre Mysteries: Curse of the Nightingale is without doubt, a superlative hidden object adventure. Filled with magnificent artwork, excellent hidden object play and a fascinating storyline, it’s a game that will grab hold of you and keep you playing until the credits roll.