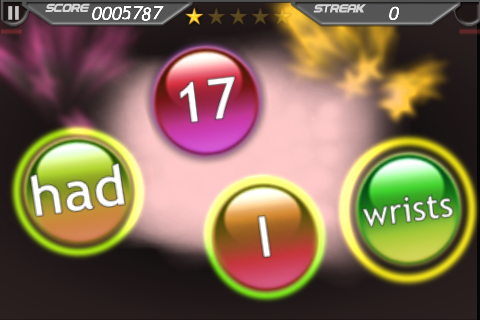 If there’s one thing the iPhone isn’t lacking, it’s music games.From Tap Tap Revenge and Rock Band to more recently released fare like Guitar Hero and Tapic, players looking to rock out on their iPhones have no shortage of selection. That’s why it takes something really special to stand out in the crowd. Much to our delight, Lyric Legend is that something special.

Unlike most music games that place all their focus on rhythm, Lyric Legend puts your knowledge of lyrics to the test. As soon as the vocalist starts belting out their tune, players will be presented with a selection of buttons on the screen. Each of these buttons displays a word. You’ll need to tap these words as soon as they’re sung to chain together combos and grow your score.

The game offers five levels of difficulty, each offering a different challenge than the last. In the beginning, for example, you’ll be given six words on the screen at a time, all displayed in the correct order and showing off a glowing circle when they need to be tapped. Change to a different difficulty and you’ll see more words on the screen. Sometimes they’ll be jumbled in order. On the hardest level they move around and lack a glow to tell you which word is coming next. In most games players change the difficulty level to best suit their level of skill. In Lyric Legend you’ll end up treating these as stepping stones. If you just pick one difficulty and settle on it, you’re missing out on half the fun.

Few songs are driven solely by lyrics, and Lyric Legend knows when it’s time to let player’s experience a taste of the rhythm-style gameplay that other games have gotten them used to. During instrumental segments the game switches to a “falling notes” experience, where players will need to tap the notes as they enter a designated area at the bottom of the screen. It’s an experience that’s no different than what you’d find in Tap Tap Revenge or Guitar Hero, but with a twist that manages to cement a new formula in the world of falling note games.

Rather than awkwardly squeezing four notes on the screen like Rock Band did, or going with the comfortable three that you’ll find in the Tap Tap series, Lyric Legend packs a whopping six notes onto the screen and manages to make the experience feel more comfortable than in any of its competition. How did it achieve this miraculous wonder? By offering the game in landscape mode. Holding the iPhone width-wise with both thumbs navigating back and forth was easily one of the most comfortable and satisfying experiences I’ve had with a music game on the iPhone. 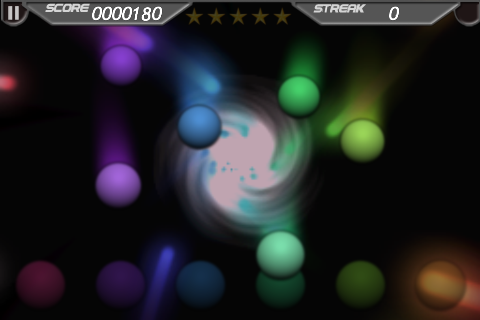 Music selection plays an important role in any game such as this, and Lyric Legend manages to satisfy here as well. While most of the music is available as in-app purchases (each pack costs 99 cents, and you get 2 songs in a pack), you’re absolutely getting your money’s worth with every purchase. Elton John, Kanye West, Vampire Weekend, Simple Minds – the selection runs the gamut. The only downside is that the game comes bundled with only 3 songs for free. Still, with 70 songs available at launch and the promise of regular content updates, you should have no problem finding a few songs you like without breaking the bank.

The game manages to throw a slight curveball that may seem annoying at first, but should really be viewed as little more than another challenge for players to overcome. Syllables and words, as we all know, are not the same thing. However our rhythm-trained brains are ready to tap on new words with every syllable – meaning instead of tapping on the three-syllabled word “vanity,” we’re likely to tap vanity and the next two words simply out of habit. You’ll need to unlearn this habit if you want to make the most of Lyric Legend. Thankfully it only takes a few plays before you get the hang tapping on each word regardless of syllables.

Music games that cater to unique experiences are nothing new, but it’s become increasingly rare to see a music game with a great selection of licensed content break from the standard falling-notes formula. Lyric Legend boldly tries something different and succeeds in delivering an outstanding music gaming experience. If you’ve ever caught yourself singing in the shower or rocking out in your car, Lyric Legend is here to let you channel that word-worthy energy into a high score you can be proud of. This might just be the best music game on the iPhone yet.